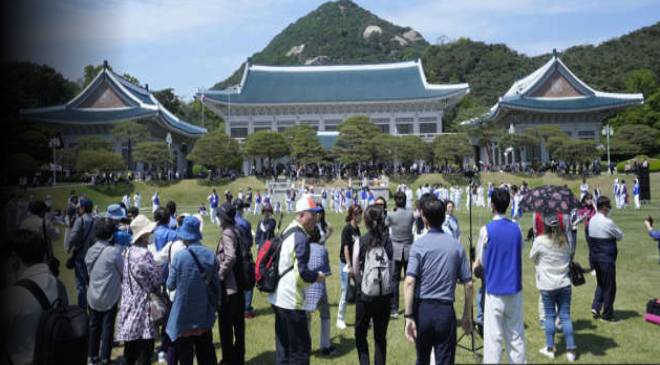 SEOUL (AP) — For many South Koreans, the former presidential palace in Seoul was a little-visited, heavily secured mountainside landmark. That’s now changed as thousands have been allowed a look inside for the first time in 74 years.

As one of his first acts, the new South Korean leader has moved the presidential offices from the Blue House, named after its distinctive blue roof tiles, and opened its gates to the public, allowing a maximum of 39,000 people a day to visit.

The normally serious compound has been transformed into something like a fair, with excited crowds looking around and standing in long queues.

“I feel grateful that the Blue House has opened to the public,” 61-year-old office worker Lee Sang Woon said recently during a tour with his family. “I am really happy to be here.”

The Blue House has gone through multiple transformations over the years. Once the site of a royal garden, the Japanese built the official residence for their governors-general there during Tokyo’s colonial rule of the Korean Peninsula. After Korea was liberated from Japan in 1945, the U.S. military commander occupied the place until it became South Korea’s official presidential office and residence upon the country’s foundation in 1948.

The Blue House opening is part of new South Korean President Yoon Suk Yeol’s pledge to abandon the palace and establish his offices at the Defense Ministry compound in the Yongsan district, about 5 kilometers (3 miles) away.

Yoon said he chose the Defense Ministry compound because it’s already equipped with security-related command facilities. He said he aims to build something similar to the White House in Washington that would let citizens have a closer look at the building over a fence. Yoon said the new offices will allow for better communication with the public.

His relocation plans, however, have faced complaints that they were rushed and unrealistic. Critics say a hasty movement of top government offices could undermine national security by concentrating too much power in one place, cost too much and violate the property rights of people living in the area.

When Moon took office in 2017, he also pledged to move out in a bid to distance himself from his disgraced, jailed predecessor, Park Geun-hye, who grew up there as the daughter of a dictator. Moon eventually abandoned his plan, and Park was pardoned late last year.

Yoon, however, started his first day earlier this month as president in Yongsan, and the ex-presidential office was opened to the public that same day.

Choi Jun Chae, 60, who runs a mill at a traditional market near the Blue House, was sorry to see the presidential office leave his neighborhood but also hopeful that the relocation would boost local businesses by bringing in more tourists.

“Under the (former President) Lee Myung-bak administration, there were lots of protests … so it was really hard to commute to this area. Cars couldn’t move, so I had to walk,” Choi said.

Thousands of people have gathered near the Blue House in the past for mass rallies and marches. Nearby residents said they suffered from noise and traffic congestion.

“I hope that protests decrease and more people visit the area,” Yoo Sung-jong, head of a popular bakery in the neighborhood, said. “But (the president) was here for a long time, so it is a bit sad too.”

While some people in the new presidential neighborhood expect an improvement because of the new offices, there are also worries.

“As for traffic issues, I can already see more people visiting here. It will be very crowded and complicated at first, but I think it will gradually get better,” said Kim Jung-taek, a gallery owner near the new presidential offices.

The new presidential office building is seen in Seoul, South Korea, Monday, May 9, 2022. For most South Koreans, the former presidential palace in Seoul was as shrouded in mystery as the buildings in their secretive rival North Korea. That’s now changed recently as thousands have been allowed a look inside for the first time in 74 years.( Yonhap via AP)