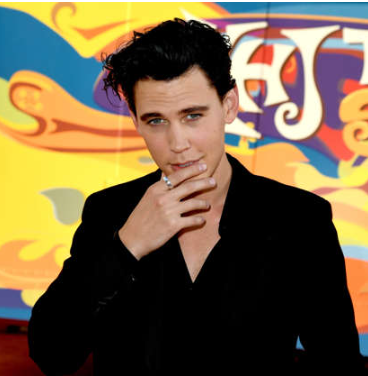 Baz Luhrmann’s forthcoming “Elvis” biopic starring Austin Butler hits theaters this summer – June 24, mark your calendars! – and this is your friendly reminder that Butler and Olivia DeJonge, who plays his onscreen wife, Priscilla, allegedly dated throughout filming. So we have a feeling their onscreen chemistry is going to be off the charts.

Speaking of . . . if anyone knows what it’s like to date a costar, it’s Butler’s former longtime girlfriend Vanessa Hudgens. Since their unexpected split in 2020, Butler has been romantically linked to three other famous women, including model Kaia Gerber. The two were first linked back in December 2021, but it wasn’t until five months later that they made their red carpet debut as a couple at the Met Gala. Though Butler initially posed for pictures with DeJonge at the event, he snuck some in with his girlfriend, too.

“Elvis” is set to hit theaters June 24, so it won’t be long until we get to see Butler transform into the King of Rock and Roll. In fact, we already got a sneak peek at his transformation in the film’s trailer, which dropped on Feb. 17. In the meantime, read up on Butler’s star-studded dating history ahead.

Butler was in a high-profile relationship with “High School Musical” alum Hudgens for almost nine years before the two split in 2020, just a month before their anniversary. Fans began speculating that the two were an item after they walked the red carpet together at the “Journey 2: The Mysterious Island” premiere, but they stayed mum about the status of their relationship for the first two years.

Hudgens was first to publicly acknowledge their coupling – she called Butler the “love of my life” in a 2014 birthday post on Instagram. The former couple shared many adorable moments together over the years, including when Butler referred to Hudgens as his “rock” at the premiere of his 2019 film “The Dead Don’t Die.”

They didn’t give a specific reason for their surprise split, but their busy schedules never made it easy.

Butler was rumored to be dating Australian actress DeJonge, his “Elvis” costar, for much of 2020. They made headlines after they were spotted cuddling up together at a movie theater around the same time that Hudgens and Butler’s breakup was made public. Neither actor ever confirmed or denied the status of their relationship, but they were seen together several more times throughout the year, grabbing romantic dinners and enjoying the beach.

In August 2021, Butler and Lily-Rose Depp caused a major stir on the internet when photos surfaced of them sharing a steamy postdinner kiss in London. Like Butler, Depp was fresh out of a serious relationship – she and Timothée Chalamet had split the year prior. Relationship rumors swirled but were never confirmed.

Most recently, Butler has been romantically linked to model Gerber. One month following Gerber’s breakup with Jacob Elordi, the two were seen stepping out of yoga class together and embracing each other while hanging out around Los Angeles. According to E! News, the pair spent Valentine’s Day together in London, and in May 2022, they finally made their red carpet debut as a couple at the Met Gala.