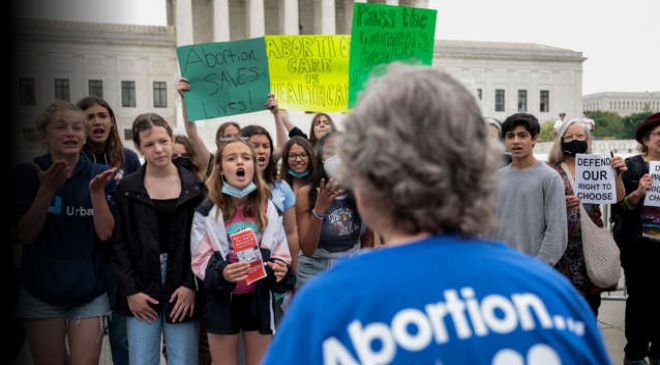 WASHINGTON – Supporters of a woman’s right to choose quickly called on President Joe Biden to protect access to abortion after a leaked draft opinion suggested the Supreme Court is prepared to strike down Roe v. Wade.

But legal experts caution that Biden’s options are limited.

Most of the steps the administration could take to preserve abortion access would rely heavily on untested legal positions, said Mary Ziegler, a visiting law professor at Harvard University who has studied and written about abortion rights.

“They’re experimental options,” Ziegler said, “in the sense that they may or may not work.”

Even so, Jacqueline Ayers of Planned Parenthood Federation of America said the Biden-Harris administration has been a “steadfast partner” in advocating for abortion rights and urged it to ramp up the fight.

“As the stakes continue to rise, we expect them to continue to use their bully pulpit and all levers of government to meet the moment,” she said.

Biden hasn’t indicated how his administration will respond but noted that he has tasked his Gender Policy Council and White House Counsel’s Office with looking at options if the Supreme Court overturns Roe v. Wade, the landmark 1973 ruling that established a woman’s right to an abortion.

“We will be ready when any ruling is issued,” he said.

Countering the chaos that would be unleashed by a court decision that overturned Roe v. Wade would require the administration to be creative and think outside of the box, said Fatima Goss Graves, an attorney who is president and chief executive officer of the National Women’s Law Center, a nonprofit advocacy group for women’s rights.

“You are going to have to see this administration do things that you haven’t seen them do before,” she said.

Graves urged the administration to declare a public health emergency if Roe v. Wade is struck down. Such a ruling would spark a national health crisis, she said, with thousands of women desperately in need of care.

Declaring a public health emergency would make federal funding and other resources available to deal with that crisis. But it also could run into legal roadblocks. A decades-old law known as the Hyde Amendment prohibits the use of federal funding for abortion in most cases.

“It is going to be critical for agencies at all levels to understand what they are experiencing and have some flexibility to move around people and resources,” Graves said. “The job number one, if a decision like this draft opinion goes through, is going to be to protect people, to ensure they have access to the care they need. And unlocking federal resources and removing any barriers that may get in the way of that is going to be a first-order priority.”

One of the most effective things the administration could do would be to expand access to abortion medication, said David Cohen, a law professor at Drexel University Kline School of Law.

The administration could challenge state laws that conflict with the Federal Drug Administration’s regulation of mifepristone, which can be taken to facilitate an abortion during the early part of a pregnancy, legal experts said.

The FDA recently removed some of its restrictions on the abortion pill to make it more readily available. Women can now receive the medication through the mail instead of being required to pick it up from a doctor in person.

Nineteen states, however, have laws that force patients to pick up abortion medication in person, directly contradicting the recent FDA decision. Other states bar prescribing the medication past the first seven weeks of pregnancy, even though the FDA has found it safe and effective through the first 10 weeks.

Since federal laws and regulations take precedence over state laws, the administration could take the position that FDA rules on abortion medication are the law of the land and that states cannot contradict them, Ziegler said.

But, “it’s not clear if that would work,” she said.

The administration could take legal action against states that restrict a woman’s access to abortion pills, Cohen said.

“Because the federal government has authorized them through a rigorous review process, states can’t put on extra restrictions or ban them,” he said, “so that would mean that a state that tries to ban abortion completely would have to still allow abortion pills.”

The administration also could expand telemedicine to make abortion services available to women in areas where they aren’t as readily accessible and facilitate interstate licensure agreements that would allow doctors to prescribe abortion medication across some state lines, Cohen said.

In addition, Cohen said, the administration could take the unusual step of leasing federal property to abortion providers – allowing, for instance, a clinic to operate out of a federal office building or a mobile clinic on federal land.

Federal property is exempt from all but a small set of state civil laws, which would allow abortion providers to avoid many of the anti-abortion restrictions that states have put in place. Some state criminal laws apply to federal lands, but federal – not state – prosecutors would be responsible for filing charges. Federal prosecutors could simply decline to bring charges against someone for violating state abortion laws, Cohen said.

Leasing federal property to abortion providers also would get around the Hyde Amendment’s prohibition on using federal funds to pay for abortion since government would be taking in money, not spending it, Cohen said.

Beyond that, abortion-rights supporters argue, Biden should nominate judges who have defended reproductive rights, although such appointments would require Senate confirmation. Activists also would like to see him use the bully pulpit of the White House to raise awareness of the issues surrounding national access to abortion.

“Now is the time for the entire Biden administration to put all possible options on the table and take action,” Cohen said. “For too long, the Democrats have been timid around abortion. And if they’re not going to act now, they basically are saying we don’t care. And that goes for President Biden, too.”