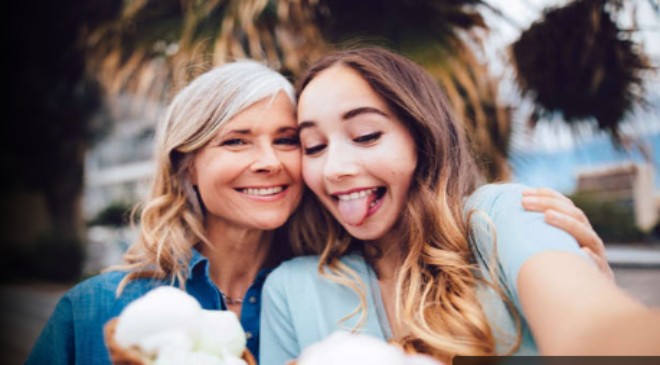 What does gut health have to do with your mood? A lot, it turns out. Shawn Talbott, PhD, a nutritional biochemist and psychonutritionist who has spent more than 20 years researching the links between our food and our moods, explains: “I call the gut microbiome—the amount and type of bacteria in the stomach and intestines—the ‘second brain,'” Talbott says, “because it produces the majority of our neurotransmitters such as serotonin and dopamine.” He continues: “When the bacteria become unbalanced, it can lead to serious mood changes. Renormalizing the bacteria can help improve symptoms of depression, anxiety, and stress.”

Nonie Rand, a mother and clinical mental health counselor in Boulder, Colorado, shares her story of how addressing the wellness of her gut microbiome helped heal her depression, as well as her daughter’s chronic migraines.

By Nonie Rand, as told to Charlotte Hilton Andersen

As soon as I heard those words from Mandy*, my then-sixth-grade daughter, my eyes immediately filled with tears. My sweet girl had been suffering from debilitating migraines for over two years and had, understandably, been really depressed because of it. But I’ll never forget that day and her bright, upbeat face as she jumped into the car after school. After her joke, we both had a giggle—I, mostly because I hadn’t heard her really laugh in two years and now I was flooded with relief. We’d finally found a treatment that helped deal with all her head symptoms—mental and physical. Very unexpectedly, finding the solution had started with her gut.

Mandy first started getting migraines in elementary school. The pain was immense, to the point where she would vomit and cry, and there was almost no reprieve. We tried everything the doctors suggested—and when that didn’t work, we tried things like biofeedback therapy, acupuncture, and massage. We even took her to sea level for many weeks after hearing that it might help. Nope. Nothing worked.

Her illness affected me as well; it was breaking my heart to watch the light and joy go out of her as she grew depressed and withdrawn from dealing with chronic pain. I didn’t want to admit it, but I was also sinking into depression. I was exhausted after so many years of dealing with this and getting no answers. I realized that I had been putting my own needs and self-care on the back burner for too long and it was taking a huge toll. I was beside myself.

I was considering going on an antidepressant when I got a call from our biofeedback provider. She suggested that Mandy try “healing her gut,”—Huh?—which would start with taking a high-quality probiotic. The one she recommended is designed specifically to boost mood and brain health by repopulating the gut microbiome with beneficial bacteria. Healing the gut, she told us, might help the migraines and would very likely help with the mental and emotional struggles.

I decided to research this idea of gut health being tied to emotional wellbeing. I learned that 80 percent of serotonin—one of the brain chemicals responsible for mood—is made in the gut and that having an unhealthy microbiome can lead to depression. I agreed to try the probiotic. It was just a powder we could mix into a drink. Even though it was a little pricey, I felt like it couldn’t hurt to try it. I had already thrown so much time, money, and energy into solutions that hadn’t worked…so why not this?

I bought some for Mandy, and also some for myself.

Within one week of taking the probiotic and eating a gut-healthy diet, I felt the dark cloud begin to lift. After a month, my depression completely lifted. Gone! I felt more energy, my brain was clear, and I started digesting my food well, including foods that had given me stomach problems in the past. (Another bonus: No more gas! I used to think it was normal to have gas at night, but it turns out that’s not true.)

Mandy was slower to find relief, but within one month, her headache broke and her mood began to improve, too—to the point where she felt like telling jokes again.

Part of me wondered if whether what we’d experienced might have actually been a placebo effect, but when I got caught up in the hassle of moving, I realized I’d forgotten to order more probiotics. This meant both Mandy and I had been off of it for a few months. Her migraines returned, and so did my depression. I recommitted to prioritizing gut health, and my mood returned to the pleasant set-point I’d known before Mandy started having migraine issues.

These days, I take the probiotic three days a week for maintenance, and my depression is still gone. Mandy still takes it daily, and her mood and migraines are better.

Dr. Talbott is a leader at Amare, the company that makes the probiotic that helped us. He’s a big believer in probiotic supplements, but also says any probiotic or prebiotic foods have the potential to be beneficial for mental health. Probiotics including yogurt, kefir, kimchi, kombucha, sauerkraut. Prebiotics including cold potatoes, garlic, bananas, oats, beans, and lentils.

Before this, I had no idea how much gut health can impact our brains! Now I’m all about taking care of my gut bacteria by taking a probiotic and eating foods full of fiber and nutrients that support the good bacteria. I’ve learned: feeling good can start with what we put into our bodies. Eating well is living well. Gut health is mental health.