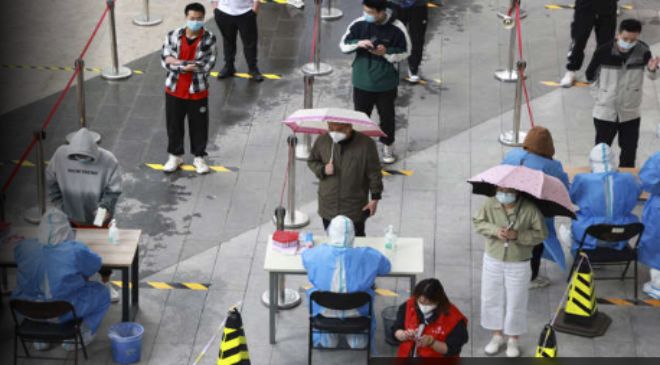 (Bloomberg) — Shanghai hinted at an easing of lockdown measures as coronavirus infections dropped to the lowest in three weeks, while case numbers in Beijing stabilized, in a potential sign authorities are starting to bring the twin outbreaks under control.

Cases in Shanghai fell for a fourth consecutive day to 13,562, though the city added another 48 fatalities. While the financial hub remains in an unprecedented lockdown that’s left much of the city’s 25 million residents confined to their homes for a month or more, an official signaled on Wednesday there may be some easing for certain areas.

The city will permit limited movement for limited groups of people in districts with basically no community spread of the virus, Zhao Dandan, vice director of the municipal health commission, said at a briefing on Wednesday without providing additional detail. A previous round of easing for compounds with no new infections did little to materially free residents from their lockdown.

Beijing reported 34 cases for Tuesday as the city started testing millions of residents as part of an unprecedented drive to identify and squash omicron’s spread before it spirals out of control. Health authorities in the capital expect more infections to be found, but so far most of them fall into two separate transmission chains.

The virus incursion into two of China’s most significant cities has posed an unprecedented challenge for the Covid Zero measures the country deploys to stamp out infections.

Yiwu, in eastern Zhejiang province, was also locked down on Wednesday, dealing another blow to global supply chains given its prominence as a hub for consumer knick-knacks. Traders from all over the world flock to the city of 1.9 million people for everything from Christmas baubles to U.S. presidential campaign merchandise.

Shanghai’s extended lockdown has sparked growing concerns about national economic growth, and is taking a growing toll on residents who have struggled to reliably access food and medical care, and have even been fenced in to their apartment buildings.

The recent rise in case numbers in Beijing sparked fears the country’s political center may also go into a lockdown — a measure never before used there. Authorities placed one area in the eastern district of Chaoyang into lockdown on Monday after finding a cluster of cases, but so far are only enacting movement restrictions in high-risk neighborhoods.

Beijing is mass testing most of the city’s districts this week, has asked companies to allow employees to work from home and suspended large gatherings. The district of Tongzhou, east of downtown Beijing and the seat of the municipal government, halted in-class teaching for kindergartens, middle schools and vocational institutions after school clusters have been found across the city..

China’s Vice Premier Sun Chunlan reiterated efforts to achieve zero community spread in Shanghai “to restore normal life and production as soon as possible”, according to a statement put out by the Shanghai municipal government on its official WeChat account.

The city is rolling out its first batch of permanent Covid testing sites and is set to erect more, underscoring its push to test early and widely will remain beyond just the immediate term.

Prevention and control work is still at a critical moment as the current Covid situation remains grim, the municipal health commission’s Zhao said.