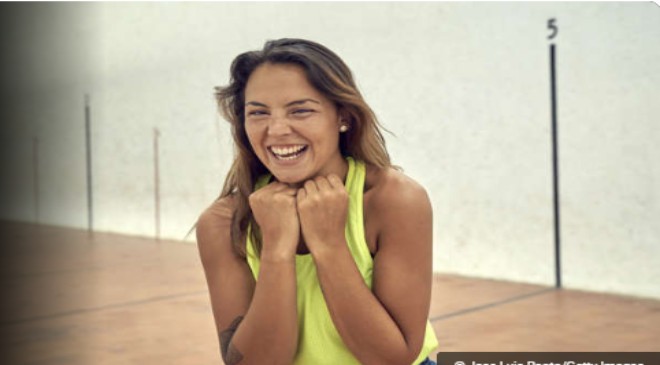 Kris Naatjes loves jogging and walking…or, she did, until she started to notice a strange reaction whenever she stepped outside to get some exercise. “I would get bright red welts, usually on my legs,” says the 52-year-old mother of five, adding that “it could be anywhere on my body, and it was insanely itchy. I had to stop immediately and just itch like crazy.”

It didn’t happen every time she exercised—instead, she observed that the rash mainly flared up when her skin was cold (which happened relatively often, as she lives in Minnesota). “The worst is when my body is hot from exercising, but my skin is cold,” she shares with The Healthy. “It’s so bad that I just know now I can’t exercise if there’s so much as a cool breeze.”

What was happening to Naatjes wasn’t a creative excuse to get out of exercising. In fact, she wound up being diagnosed with an actual exercise allergy.

Can you be allergic to exercise?

The short answer is, surprisingly, yes.

Christopher Scott Little, PhD, is an associate professor of immunology in the Department of Bio-Medical Sciences, Philadelphia College of Osteopathic Medicine. Dr. Little says that in some people, exercise can trigger an allergic reaction where the blood releases histamines—naturally occurring chemicals that are part of your immune system’s defense against environmental invaders. When the histamines react to harmless stimuli, like exercise or tree pollen, they can cause an overreaction in your body.

That immune overreaction causes the allergy symptoms, often in the form of an itchy rash. In very rare cases, it can cause anaphylactic shock.

Vivek Cherian, MD, an Internal Medicine Physician in Chicago, raises a noteworthy point: “Technically this isn’t an allergy, as the definition of an allergy is when the body has an immune response to a particular substance, be it pollen, dust, or peanuts for example,” Dr. Cherian explains. “In the case of exercise-induced allergy, however, you do get symptoms that are similar to allergy symptoms—but the cause is not because of a specific substance or allergen. Why exactly this happens as a response to exercise is a bit of a mystery.”

There are two main types of an “exercise allergy”

Exercise-induced urticaria is more common and causes hives, whose scientific name is “urticaria.” The most common symptoms are rashes, hives, itchiness, redness, and hot spots on the skin. Hives can also cause headaches, stomach cramps, mental fog, and swelling of the tongue or hands. It’s usually mild and stops on its own when you stop exercising.

The second type of exercise allergy, exercise-induced anaphylaxis, is considered very rare but can be fatal. In this case, Dr. Little explains, the histamines trigger an anaphylactic reaction, similar to what some people experience with bee stings or peanut butter. This reaction can cause your body to go into shock, your throat to close up, and your heart to stop.

Who is at risk for an exercise allergy

Mayo Clinic research in 1997 suggested that exercise-induced urticaria was relatively rare—though at that time, the researchers reported that cases were increasing. (The upward trend might have occurred because exercise grew more common among the general public around the 1990s.) The Mayo Clinic researchers’ findings suggested that women were more likely to experience this condition than men, and half of sufferers had a history of eczema, asthma, or reactions to airborne allergens.

They noted that exercise-induced urticaria was most likely to occur when an individual had exercised in a very warm, humid, or cold environment. They also reported that a single reaction generally lasted under 30 minutes.

Current research echoes that cases remain quite rare, while also leaving room for a good deal still to be discovered about the condition. In March 2022, a team of physicians in Florida reported on a case study involving a 22-year-old Asian male who experienced a widespread rash when he went running. The researchers stated past science has found that it was “relatively more common” for exercise-induced urticaria to come on after an individual had eaten a certain food. However, in this particular case study, four hours had passed since the individual had eaten.

How do you treat exercise-induced urticaria?

Dr. Cherian says for most people, exercise-induced urticaria is a problem that solves itself when you stop the activity. “For me, the itch and the rash go away as soon as my skin warms back up,” Naatjes says.

The symptoms often ease as your skin temperature normalizes—but if it doesn’t, you can speak with your doctor about taking an over-the-counter antihistamine, Dr. Cherian says. If symptoms persist for more than a few hours, it may definitely be time to call your doctor about other options. They will likely want to rule out other causes for your rash, like food or environmental allergens.

If you show any signs of an anaphylactic reaction, including swelling in your throat or mouth, inability to breathe, chest pain, or loss of consciousness, then you require emergency medical care and you should carry an Epi-pen, Dr. Cherian adds.

And, he says, the best way to treat an exercise allergy is to prevent triggering one in the first place. The answer probably isn’t to forgo physical activity for ever. Instead, Dr. Cherian says you might consider exercising indoors in a climate-controlled environment and wear clothing that keeps your skin from overheating or becoming chilled.

Should you exercise with urticaria?

Dr. Cherian says that for many people, it’s just fine to continue to exercise if you want. However, if you’re like Naatjes, the itching might make it too uncomfortable. “Work with your doctor to identify your triggers and they can help you come up with a workout plan that will help you stay comfortable,” Dr. Cherian advises. This might mean during the winter you swap outdoor runs for indoor swims, or that you dress in layers to help moderate your body temperature.