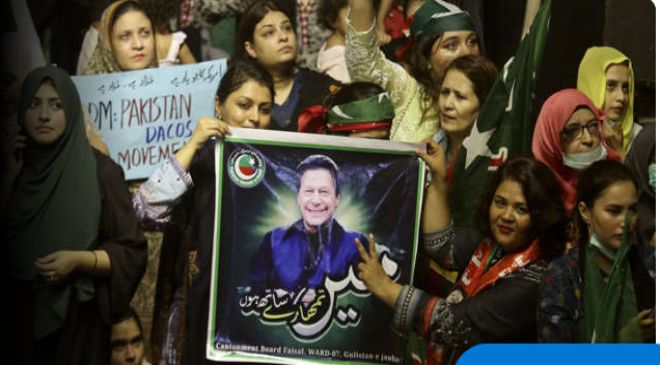 ISLAMABAD (AP) — Pakistani lawmakers are to choose a new prime minister on Monday, capping a tumultuous week of political drama that saw the ouster of Imran Khan as premier and a constitutional crisis narrowly averted after the country’s top court stepped in.

The leading contender is Shahbaz Sharif, opposition lawmaker and a brother of disgraced former Prime Minister Nawaz Sharif. But his election will not guarantee a clear path forward — or solve Pakistan’s many economic problems, including high inflation and a soaring energy crisis.

Khan, a former cricket star whose conservative Islamist ideology and dogged independence characterized his three years and eight months in office, was ousted early Sunday after losing a no-confidence vote in Parliament. Deserted by his party allies and a key coalition partner, his opposition pushed Khan out with 174 votes — two more than the required simple majority in the 342-seat National Assembly.

The opposition has selected Shahbaz Sharif as its candidate for prime minister, claiming it has enough votes in his favor.

Khan’s Pakistan Tehreek-e-Insaf, or Pakistan Justice Party, has put forward former foreign minister and seasoned politician Shah Mahmood Qureshi as its candidate. But Qureshi on Sunday muddied the waters by saying that many lawmakers in Khan’s party were contemplating resigning from Parliament after Monday’s vote for prime minister.

In a show of strength and precursor to the political uncertainty ahead, Khan rallied hundreds of thousands of supporters late Sunday to protest his ouster, and describing the next government as an “imposed government.” In cities across Pakistan, Khan’s supporters marched, waving large party flags and vowing support. The youth, who make up the backbone of Khan’s supporters, dominated the crowds.

Some were crying, others shouting slogans promising Khan’s return.

Khan has also demanded early elections, though the balloting is not due before August 2023. He has tapped into anti-American sentiment in Pakistan, accusing Washington of conspiring with his opponents to topple him. His conspiracy theory resonates with his young support base, which often sees Washington’s post 9/11 war on terror as unfairly targeting Pakistan.

Pakistan’s political drama began on April 3 when Khan sidestepped an initial no-confidence vote demanded by the opposition by dissolving Parliament and calling early elections. The opposition, which accuses Khan of economic mismanagement, appealed to the Supreme Court. After four days of deliberations, the court ordered Parliament re-instated and the no-confidence vote went ahead. After a marathon Parliament session that started Saturday and that also saw the resignation of parliament speaker, Asad Qaiser. Khan was ousted early Sunday.

Khan claims the opposition colluded with Washington to topple him, allegedly because of his independent foreign policy favoring China and Russia. He was also criticized for a visit he made on Feb. 24 to Moscow, where he held talks with Russian President Vladimir Putin as Russian tanks rolled into Ukraine.

The U.S. State Department has denied any involvement in Pakistan’s internal politics.

The road ahead will be stormy for the opposition coalition, which consists of parties that cross the political divide, from the left to the radically religious. The two largest parties are the Pakistan Muslim League, headed by Sharif, and the Pakistan People’s Party, co-chaired by the son and husband of slain ex-Prime Minister Benazir Bhutto.

In Pakistan, a few wealthy and powerful families have dominated politics for decades, with power most often alternating between the Sharifs and Bhutto camps. Both political houses have been accused and occasionally convicted of widespread corruption — and both have denied the allegations.

Nawaz Sharif was unseated by the Supreme Court in 2015 after being convicted in connection with financial irregularities revealed in the so-called Panama Papers — a collection of leaked secret financial documents showing how some of the world’s richest hide their money and involving a global law firm based in Panama. He was disqualified by Pakistan’s Supreme Court from holding office.

Asif Ali Zardari, Bhutto’s husband who served as president of Pakistan after the 2008 elections, has spent more than seven years in prison, convicted on corruption charges.

Both families have dismissed corruption allegations against them as being politically motivated.

Khan came to power in 2018, promising to break family rule in Pakistan but his opponents claimed he won the elections with help from the powerful military, which has ruled Pakistan for half of the country’s 75-year history.

Ex-Prime Minister Nawaz Sharif was ousted in 1999 in a military coup and Benazir Bhutto’s government was ousted several times after the military sided with her opposition. In Pakistani politics, where loyalties are often fluid, Bhutto’s fiercest opposition came from Sharif’s party.

Shahbaz Sharif has served three times as chief minister of Pakistan’s largest, most influential Punjab province, where 60% of the country’s 220 million people live. His son Hamza was elected by the Punjab provincial parliament last week as new chief minister, ousting Khan’s nominee. Khan’s party is challenging that election and the younger Sharif has yet to be sworn in.