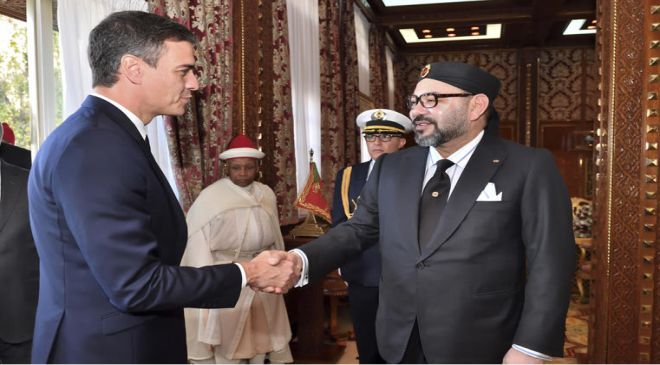 RABAT, Morocco (AP) — Spanish Prime Minister Pedro Sánchez is set to meet with Moroccan King Mohammed VI on Thursday during a two-day visit to Rabat that seeks to mark an easing of diplomatic tensions centered on Morocco’s disputed region of Western Sahara.

The King will invite Sánchez and his family to share in the Iftar meal to break the day’s fast during the Muslim holy month of Ramadan, according to a Spanish government official not authorized to be named in media reports.

Spain’s government calls the meeting an opportunity to open a “new stage” in ties with Morocco based on “mutual respect,” but also to discuss “restraint from any unilateral action to honor the importance of all that we share and to avoid future crises.”

Relations between the two countries separated by the Strait of Gibraltar were severely frayed last April. Morocco was angered by Spain allowing the leader of the pro-independence movement for Western Sahara to receive medical treatment for COVID-19 at a Spanish hospital on request by Morocco’s neighbor Algeria, an ally of pro-independence Sahrawis.

Morocco responded by loosening its border controls around Spain’s North Africa enclave of Ceuta, provoking the unauthorized crossing of thousands of young Moroccans and migrants from other African countries.

The mood did not improve until last month, when Sánchez took the surprising decision to alter Spain’s long-standing position on Western Sahara, a former Spanish colony. In a letter to King Mohammed, Sánchez backed Morocco’s plan to give more autonomy to Western Sahara as long as it remains unquestionably under Moroccan grip.

The Spanish leader called Rabat’s proposal “the most serious, realistic and credible” initiative for resolving the decades-long dispute over the vast territory — that’s largely barren but rich in phosphates and faces fertile fishing grounds in the Atlantic Ocean — which Morocco annexed in 1976.

Morocco, in turn, sent back its ambassador to Spain 10 months after he was recalled.

Morocco is now seeking assurances that Spain’s support for the autonomy proposal is a strategic shift in its foreign policy. King Mohammed said last year that his country will not sign any economic partnerships with countries that oppose Moroccan sovereignty over Western Sahara.

Morocco has grown in strategic importance to Spain over the past decade. Rabat is considered critical both in the fight against radical jihadi groups as well as in holding back increasing numbers of African migrants who want to reach Europe as they flee violence and poverty.

Sánchez and Spanish Foreign Minister José Albares have insisted that Spain continues to support the resolution of the Western Sahara question via a United Nations-backed referendum.

But the drive to appease Morocco has earned Sánchez sharp criticism both in Madrid and in Algiers.

His Socialist Party has received no backing from any other party in Spain’s parliament, not even the junior member in the government coalition, for the tilt toward Rabat. Its political opponents accuse Sánchez of having betrayed the Sahrawi people while getting nothing tangible in return from Morocco. Sánchez has responded that he has worked with Spain’s national interest in mind. Now he is under pressure to show real results.

Potentially even more problematic for Sánchez is the damage to relations with Algeria, which has recalled its ambassador to Spain in a sign of its continued support for the Western Sahara independence movement. Spain, while having a relatively low dependence on natural gas imports compared to other European Union countries, receives gas from Algeria via a pipeline and tankers carrying liquified natural gas.