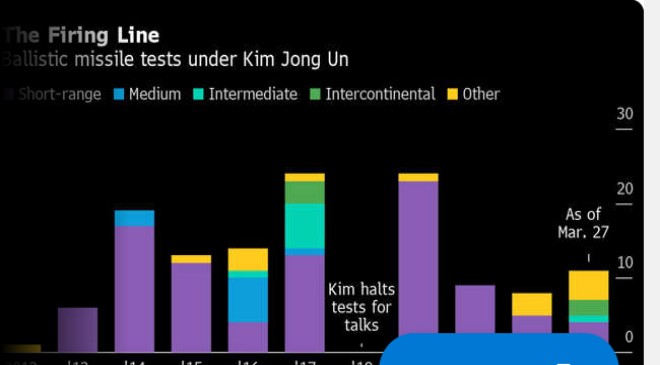 (Bloomberg) — Kim Jong Un’s influential sister threatened South Korea with a nuclear strike if it tried to attack, in what appeared like an effort to justify future provocations to challenge the hawkish new president soon taking power in Seoul.

Kim Yo Jong said that if South Korea “opts for military confrontation with us, our nuclear combat force will have to inevitably carry out its duty,” the official Korean Central News Agency reported Tuesday. It was the second warning issued by the younger Kim in about 48 hours, after she earlier denounced South Korean Defense Minister Suh Wook as a “senseless and scum-like guy.”

The comments were the first Kim Yo Jong has made in state media in about six months and indicate that she still serves as the face of Pyongyang’s policies toward Seoul. South Korean President-elect Yoon Suk Yeol is set to take power May 10, after pledging to align more closely with the U.S. and take tougher line toward North Korea and China.

Kim Yo Jong — reportedly dubbed “Princess Yo Jong” by her late father, former leader Kim Jong Il — is a blood member of the ruling family, giving her a special status that exceeds her relatively low rank in the ruling Workers’ Party. She is often shown in state media near her brother and has in recent years led North Korea’s pressure campaigns against South Korea and the U.S.

Her latest warnings come in response to remarks last week by Suh, who reaffirmed Seoul’s ability to launch preemptive strikes on North Korea to stop an impending attack. South Korean defense policy has long allowed for such strikes, but the risk of one took on greater immediacy after Yoon endorsed the tactic during the presidential campaign.

Kim Yo Jong said that North Korea was prepared to launch its own “dreadful attack,” if the situation reached that phase. “And the south Korean army will have to face a miserable fate little short of total destruction and ruin,” she said, according to the KCNA report Tuesday.

A delegation sent by Yoon held talks with U.S. officials in Washington and agreed to expand and upgrade the military alliance between the two countries, the Yonhap News Agency reported Tuesday. The visit came after North Korea last month fired off its first intercontinental ballistic missile since 2017.

Outgoing South Korean President Moon Jae-in, a progressive, has long backed rapprochement with North Korea. But Kim’s regime labeled Moon a meddlesome mediator after talks unraveled and, in 2020, blew up a $15 million liaison office north of the border that was one of the South Korean leader’s biggest achievements.

North Korea’s next provocation could be its first nuclear test in more than four years. Workers have been observed digging a new passageway at the Punggye-ri site where North Korea conducted all six of its previous nuclear tests, South Korean media including the DongA Ilbo newspaper reported in late March.

Kim Yo Jong did offer an olive branch to Yoon, saying, North Korea wanted to avoid war and her brother, who she referred to as “our marshal,” believes North Korea’s “principal enemy is just war itself.”