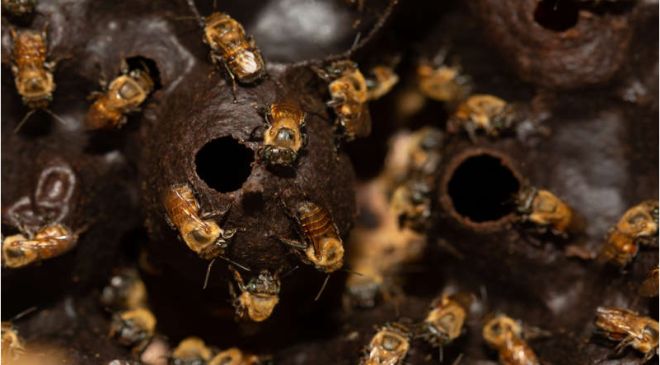 They come in many colors: golden, solid onyx, or striped dandelion and cinnamon. Their eyes can be beady black, slate gray, or even bluish-green. Their bodies may be as small as lentils or big as wine grapes. But the most amazing thing about stingless bees are the honeys they produce, which are increasingly being sought after for food and medicine.

© Provided by National Geographic Stingless bees, also known as meliponine bees, surround a honey pot within their hives. Their honey is used to help wounds heal and to treat infections—and brings economic relief to keepers in the Peruvian Amazon.

In the Peruvian Amazon, people are just beginning to raise a few of the area’s 175 different species of stingless bees, which promise to help beekeepers and their communities. Historically, such honey has typically been harvested from the wild, which destroys the hives.

But in the last few years, scientists including Cesar Delgado, with the Instituto de Investigaciones de la Amazonía Peruana (IIAP), are teaching people to raise and keep the insects in sustainable ways.

Biochemist and National Geographic Explorer Rosa Vásquez Espinoza is partnering with Delgado and colleagues to better understand the bees, what they pollinate, and the biochemical contents of their medicinal honey.

Besides being fascinated by the insects themselves and their products, she wants to help champion stingless beekeeping because of all the benefits the bees bring to communities that raise them—many of which have been hard hit by the COVID-19 pandemic.

“Stingless bees are bringing life back to the Amazon,” Espinoza says, by providing medicinal honey, income, and pollination benefits to a region in need of help.

There is a long and rich history of using honeys as medicine, especially in ancient times. Some records show that people have used honey as a balm, an inebriant, a psychoactive substance, or as a poison. Multiple contemporary studies suggest that honeys from honeybees and stingless bees have antimicrobial, anti-inflammatory, and wound-healing properties.

Stingless bees make honey with chemicals that ward off microbial and fungal growth, an adaptation to keep the substance from spoiling in the tropics. Given the wide variety of plant biodiversity in the Amazon, and the incredible range of botanical chemicals the bees mix into their honeys and wax, it’s also no surprise it has medicinal value. Indeed, some call such honey a “miracle liquid.”

Already, people in the tropics use several types of stingless bee honeys and wax from their hives to treat upper respiratory infections, skin conditions, gastrointestinal problems, and even to treat diabetes and cancer. Though research has begun providing a hint of support for some of these uses, much of it is still preliminary. More investigations into the honeys’ medicinal benefits is urgently needed, says David Roubik, an expert on stingless bees at the Smithsonian Tropical Research Institute in Panama.

“We use the honey for food and medicine,” says Heriberto Vela Córdova, a beekeeper in San Francisco, Peru, who is part of the Kukama-Kukamiria Indigenous community. “For food we use it with coffee, bread. For medicine we use it for bronchitis, pneumonia, burns, skin cuts, colds, arthritis.” (Learn more: This desert valley is home to 500 bee species, a world record.)

For thousands of years, Indigenous peoples throughout the New World tropics have harvested honey from dozens of stingless bee species, also known as meliponine bees. These social insect form colonies with a queen and many workers. As the name implies, these insects cannot sting, and are thus less dangerous to raise than, say, European honeybees, which are not native to the New World. Many meliponine bees can, however, inflict painful bites with their mandibles.

Because there are so many species of stingless bees, found throughout all of the world’s tropics and subtropics, the husbandry of such animals, also known as meliponiculture, can be complex. Aside from the Maya, who worked out sophisticated methods for raising stingless bees in the Yucatán Peninsula—practices that survive to this day—many Indigenous peoples traditionally harvested honey from wild hives.

In Brazil, meliponiculture is widespread, increasingly sophisticated, and popular, but in Peru, the practice is beginning to develop and expand, says Breno Freitas, a researcher at Universidade Federal do Ceará in Brazil.

Currently stingless bees are kept and raised by at least a hundred families in half of the Peruvian Amazon’s states, many of which Delgado has helped instruct. He teaches people to raise stingless bees in rectangular boxes that allow easy access to the bees’ sugary secretions, which, unlike honeybees. are not kept in regular combs but rather in globular compartments called honeypots. Raising the bees allows keepers to split nests and establish a steady source of income, rather than relying on taking honey (and bees) from the forest, which harms these vital pollinators, Roubik says.

Stingless bees are often more picky than honeybees in terms of what plants they pollinate. In areas where they are native—which is where they should be raised, Freitas says—they are more skilled at pollinating Indigenous plants, making them important for ecosystem health. They’re also beneficial to agriculture. A 2020 study co-authored by Delgado shows that when kept next to crop fields, stingless bees can help increase the yield of a native crop, camu camu, by nearly 50 percent. (See also: World’s largest bee, once presumed extinct, filmed alive in the wild.)

Delgado, Espinoza, and photographer Ana Elisa Sotelo visited Córdova and his family in December 2021 to learn more about how he raises the 40 hives of bees on his property, which include six different honey-producing native species. These include Melipona eburnea, sometimes known as the toad’s mouth bee.

While looking into the beehives, Sotelo recalls the bees flying around their heads “with rapid wing beats, buzzing and harmlessly resting on our bodies.” Córdova’s children gathered medicinal plants to look at, including sangre de grado trees, extracts of which treat diarrhea, diabetes, and infections; the bees use resin from this to build their hives. They also examined the bright red achiote plant, used to make dye and to treat constipation, and camu camu, a delicious-tasting fruit, says Espinoza, who is currently completing a postdoctoral fellowship at University of Michigan. The bees pollinate all these plants.

“Native bees are better to raise—they are more docile since they do not sting,” he says. “The honey is higher quality given is curative properties… and [unlike honeybees], the native bees build their pots with wax they produce as well as with the resin they extract from trees, some of which are known to be medicinal like the dragon blood’s tree resin,” which is applied to wounds.

During the visit with Córdova, Espinoza collected some samples of honey, and she plans to return to Peru to collect more. Looking forward, she plans to study various honeys’ chemical and microbial composition, and “will be interested in looking at the microbiome of the bees themselves,” she says. She also wants to find out all the plants that the bees feed upon.

“Exploring 600 species of stingless bees [offers] endless new opportunities for discoveries on their behavior, choosing healing materials from nature; processing in the nest, choosing associations with microbes; and delivery of pharmaceutical honey, pollen and propolis,” a resin-like substance created by bees, says Patricia Vit, a stingless bee researcher at the University of the Andes in Venezuela.

(In this episode of our podcast Overheard, we explore the shady business of stealing bees—Listen now on Apple Podcasts.)

The Córdovas are one of many families that use some of the honey and sell the rest: They typically consume 20 bottles of honey, and sell 30 each year in local markets.

This much needed income—and medicine—has helped families weather the pandemic.

It’s just one way bees are helping in “preserving the life and health of the forest and its people,” Sotelo says.

Humanity has just scratched the surface of how much stingless bees could provide, Vit says.

Looking forward, research on the biochemical and medicinal value of this honey is of utmost importance, Roubik says. “We’re still horribly ignorant about what is really going on when we talk about anything medicinal with stingless bee honey.”