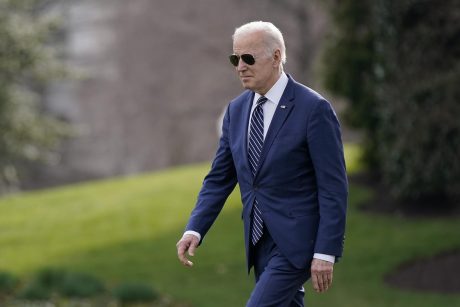 President Biden will travel to Belgium and Poland this week, seeking to hold together a Western alliance that is beginning to show potential cracks and making a symbolic appearance in a country whose leaders fear it could be a future target of Russian aggression.

Biden will land in Brussels on Wednesday night, as the Russian invasion of Ukraine approaches the one-month mark with no sign of letting up. As the war grinds on and Ukrainian leaders plead for additional assistance, divisions are emerging between allies who want to supply offensive weapons such as fighter jets and others who are wary of escalating the confrontation with Moscow.

The president’s decision to visit Poland reflects that country’s position at the epicenter of an intensifying refugee crisis, as about 300,000 Ukrainian refugees have sought safety in Warsaw since the conflict began. Biden, who may visit a refugee camp while he is in Poland, is expected to promise significant U.S. help with the crisis.

Poland is the biggest — and arguably the most central — country on Europe’s eastern flank, bordering Ukraine and Belarus on one side and Germany on the other. With Washington and Warsaw recently at odds over whether to provide fighter jets to Ukraine, Biden’s visit is an opportunity to make the case that the alliance remains united despite such differences.

Despite some calls for him to do so, Biden does not plan to visit Ukraine, the White House said Monday, given the dangers of a president entering a war zone.

Biden’s trip, only his third overseas journey since taking office, will begin in Brussels where he will attend a NATO summit, a Group of 7 meeting and a session of European Union heads of state. He will then travel to Poland, meeting with President Andrzej Duda on Saturday.

Although the White House has not announced that Biden will visit refugees while he is in Poland, many in Biden’s circle expect him to do so. White House press secretary Jen Psaki said Monday that Biden and the European leaders will discuss “military coordination, humanitarian and economic coordination,” while in Poland Biden will “talk about everything from refugees, refugee assistance and continued assistance we can all provide together.”

More broadly, the president’s trip is aimed at ensuring that the United States and its allies keep working together against Russian President Vladimir Putin as Russia’s assault on Ukraine continues.

“Unity has been front and center for the president in terms of what will make us successful over time — unity with our European counterparts, unity among NATO, unity among the G-7,” Psaki said. “And that doesn’t happen by accident. And so coming out of this, what the president is hoping to achieve is continued coordination and a unified response to the continued escalatory actions of President Putin.”

In one sense, the trip may prove to be more symbolic than substantive. It remains unclear what further action the United States and its allies are prepared to take to punish Russia and to bolster the defense of Ukraine. The West has already unleashed a crippling package of sanctions against Moscow and provided billions of dollars in military assistance to Kyiv.

But diplomats and analysts said Biden’s visit to the heart of Europe, at a time of war and upheaval like the current one, has its own value.

“The most fundamental deliverable is for the U.S. president to show up at the time of the greatest crisis in European security since the end of the Second World War,” said Ian Lesser, the vice president of the German Marshall Fund. “There’s an opportunity for American leadership, there’s an expectation for American leadership. That symbolism is actually highly important.”

Biden will probably be applauded in Brussels for his actions to pull together the transatlantic alliance. The visit to Warsaw could prove trickier.

Poland has taken in millions of Ukrainian refugees, and Polish officials have said they do not have the capacity to handle the influx. Warsaw’s mayor warned in an interview with The Washington Post that the city is on the brink and is struggling to provide enough housing, schooling and medical care for the refugees who continue to cross the border.

In addition, the two nations engaged recently in a public disagreement after the United States essentially declined an offer from Poland to deliver MiG-29 fighter jets to an American military base for use in Ukraine. Biden administration officials raised concerns that Poland’s offer could increase tensions with Russia, which has said that any country hosting Ukraine’s military aircraft would be considered part of the ongoing conflict.

“To my knowledge, it wasn’t pre-consulted with us that they plan to give these planes to us,” Victoria Nuland, the undersecretary of state for political affairs, told the Senate Foreign Relations Committee this month. She characterized Poland’s unusual public offer as a “surprise move by the Poles.”

But the most urgent challenge may be the displacement and flight of so many Ukrainians. Amy Gutmann, the U.S. ambassador to Germany, told reporters Monday in Berlin that the Biden administration is intent on “making sure that the U.S.’s concern and interest in helping with the refugee situation is front and center.”

Gutmann said the United States is prepared to ease the burden on Europe by taking refugees, but that many of those fleeing the fighting may wish to remain closer to Ukraine in hopes of eventually returning home.

“Most refugees want to go back, if they can, when they can,” the ambassador said. “And most don’t want to move farther from home than they have to. That said, I know there’s a willingness on the part of the U.S. to accept Ukrainian refugees if they want to come to the U.S.”

Gutmann hailed cooperation between the United States and Europe in responding to the Kremlin’s aggression, saying Americans feel a “special responsibility” to assist Ukraine even though “we’re more insulated geographically from Putin’s attack.”

Psaki reiterated Monday that Biden will not visit Ukraine, despite some calls from Ukrainian leaders for him to do so.

“Certainly any president of the United States traveling into a war zone requires not only security considerations, but also an enormous amount of resources on the ground, which is always a factor for us as we make considerations,” she said.