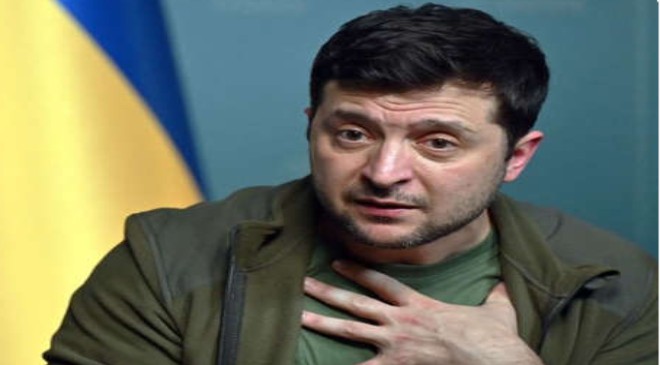 Ukrainian President Volodymyr Zelenskyy is scheduled to address Germany’s parliament on Thursday, a day after he gave an impassioned address to Congress, pleading for more help to defend his country amid Russia’s invasion. Zelenskyy spoke over a video link, invoking the most horrific moments in American history to argue the case for imposition of a “no-fly” zone, or at least more military hardware, stiffer sanctions against Russia and additional steps to prevail against what he described as an assault on the world’s democratic values. Hours later, Biden announced an additional $800 million in military aid for Ukraine, which now totals $1 billion just this week, to help “fend off Russia’s assault.” Meanwhile, Russian airstrikes ripped apart a theater in Mariupol that served as a makeshift shelter for hundreds of people, Ukrainian officials said, as Russian President Vladimir Putin said the “special operation” in Ukraine was going according to plan.

Three of the four No. 1 seeds in the men’s NCAA Tournament will be in action Thursday, with Gonzaga, Baylor and Kansas set to play. Baylor, the No. 1 seed in the East Region, will begin its tournament run against Norfolk State in Fort Worth, Texas – less than two hours away from where Baylor plays its home games. That game will tip off at 2 p.m. ET on TBS. And in the West Region, No. 1 overall seed Gonzaga will face off against Georgia State (TNT, 4:15 p.m. ET), who won the Sun Belt Conference tournament last week. Kansas will close out Thursday’s slate of games, when it faces Texas Southern (truTV, 9:57 p.m. ET), who triumphed in its play-in game on Tuesday.

NASA’s Artemis program is set to take a first step toward returning humans to the moon. On Thursday night, the agency’s Space Launch System (SLS) mega moon rocket and Orion crew capsule, mounted on top of a Crawler-transporter 2 (CT-2), will roll out to their lau

nchpad at Kennedy Space Center for the very first time. Transporting the 322-foot, 18 million pound SLS rocket the four miles to the launchpad is expected to take about 11 hours. Once SLS is secured at the launchpad, the rocket will spend about two weeks undergoing various tests. The rollout is part of a “dress rehearsal” of NASA’s uncrewed Artemis I mission, which will launch the Orion capsule around the moon later this summer.

The U.S. Census Bureau released the 2016-2020 American Community Survey on Thursday after COVID-19 caused the first-ever delay in the release of the report. The survey provides key population and housing data for communities across the country – informing critical local funding initiatives. The bureau randomly selects over 3.5 million households annually to participate in the survey – but the pandemic limited the agency’s ability to gather information from certain groups. People who were high-income, educated and were typically homeowners were more likely to respond, causing potential bias in the data, ACS Branch Chief Gretchen Gooding explained on a March 10 pre-release webinar. For this reason, the bureau adjusted its methods and delayed the December 2021 deadline to review the survey’s quality.

Winter is finally coming to an end — the season’s final full moon will rise Thursday evening. The worm moon will reach peak illumination at 3:20 a.m. EDT on Friday, but you can catch it in nearly-full form Thursday and Friday evening thanks to “moon illusion,” when the moon looks larger at the horizon than it does high in the sky.  Native Americans in eastern and central U.S. and other groups have historically named the months and their moons based on nature’s cues at that season. This one’s called the worm moon because in cold climates, the ground thaws and earthworms appear. In Christianity, when this moon appears before the spring equinox, as it does this year, it’s also called the Lenten moon. This year’s spring equinox occurs at 11:33 a.m. EDT on Sunday.