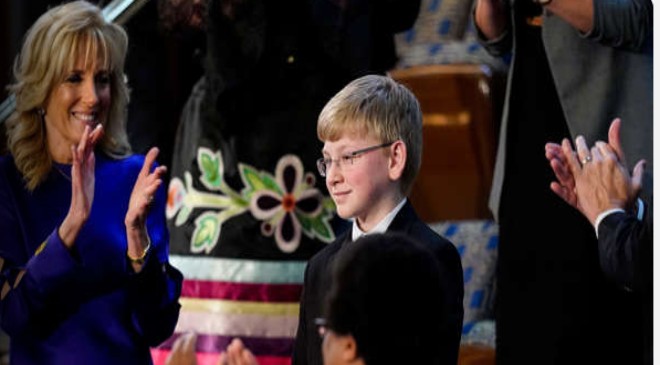 Of all the guests invited to President Joe Biden’s first State of the Union address, one of the few mentioned was 13-year-old Joshua Davis.

Davis first popped up during the address when Biden spoke about Joseph “JoJo” Burgess, a Pennsylvania steelworker who was seated alongside Jill Biden in the first lady’s viewing box. At the moment, Davis shook the hand of Burgess as the camera focused on the steelworker.

One of the first lady’s eight guests, Davis’ moment of recognition came when Biden spoke about lowering the cost of drug prices, specifically the cost of insulin.

Here’s what to know about the 13-year-old, who celebrated his birthday on Monday:

Davis, who is from Midlothian, Virginia, was diagnosed with Type 1 diabetes when he was just 11 months old, according to the White House.

At the age of 4, Davis began advocating for the Virginia General Assembly to make “school safer for kids with Type 1 diabetes.” Since then, Davis has continued to raise awareness, advocating for lowering the costs of insulin and prescription drug costs, alongside his father, Brian, who also has Type 1 diabetes.​​​

Last month, the seventh grader at Swift Creek Middle School introduced President Biden at an event on prescription drug costs at a community college in Virginia.

What did Biden say about Joshua Davis?

Here is what Biden said about Davis at the State of the Union:

We pay more for the same drug produced by the same company in America than any other country in the world. Just look at insulin. One in ten Americans has diabetes. In Virginia, I met a 13-year-old boy, the handsome young man standing up there, Joshua Davis.

“He and his dad both have Type 1 diabetes, which means they need insulin every single day. Insulin costs about $10 a vial to make. That’s what it costs the pharmaceutical company.

“But drug companies charge families like Joshua and his dad up to 30 times that amount. I spoke with Joshua’s mom.

“Imagine what it’s like to look at your child who needs insulin to stay healthy and have no idea how in God’s name you’re going to be able to pay for it.

“Joshua is here tonight, but yesterday was his birthday. Happy birthday, buddy, by the way.

“For Joshua, and 200,000 other young people with Type 1 diabetes, let’s cap the cost of insulin at $35 a month so everyone can afford it.

“And drug companies will do very, very well, their profit margin. And while we’re at it, I know we have great disagreements on this floor with this, let’s let Medicare negotiate the price of prescription drugs. They already set the price for VA drugs.

“Look, the American Rescue Plan is helping millions of families with Affordable Care Act plans to save $2,400 a year on their health care premiums. Let’s close the coverage gap and make these savings permanent,” Biden said.

From shaking the hand of Burgess to encouraging people inside the House chambers to applaud Biden, people couldn’t get enough of Davis on their screens.