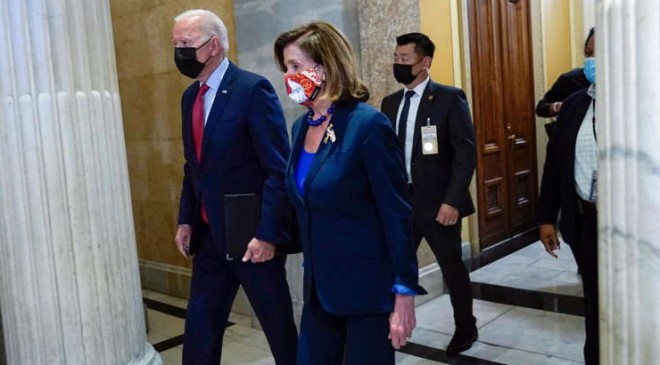 The lawmakers were back; the masks were (mostly) gone; and the partisan banter that typically accompanies the president’s annual update on national affairs returned in force to the House chamber.

But as President Biden delivered his first State of the Union address to the nation Tuesday night, there were signs everywhere that the customary speech had found extraordinary times: Russia’s invasion of Ukraine marks the first conventional war in Europe since the Second World War, and no one knows how it will end.

That somber reality hung over the outer fanfare of the occasion like an anvil dangling over a Macy’s parade. And even Biden’s allies acknowledged that the breach of peace had raised the stakes – and expanded the audience – of Biden’s address.

A number of lawmakers, to show solidarity with the outgunned Ukrainians, wore the blue and yellow of the Ukrainian flag. The first lady, Jill Biden, watched from the gallery with a special guest: Oksana Markarova, the

Ukrainian ambassador to the United States. Speaker Nancy Pelosi (D-Calif.), perched next to Vice President Kamala Harris behind Biden, wore a lapel pin featuring the U.S. and Ukrainian flags side-by-side. And White House aides, fearing a blitz of Russian strikes on Kyiv in the midst of Biden’s speech, reportedly massaged his words so they wouldn’t sound tone deaf if that grim scenario came to be. (It didn’t).

Russia’s unprovoked aggression has fashioned an environment of uncertainty and apprehension, but also of global defiance and rare bipartisanship on Capitol Hill, where lawmakers of all stripes are vowing additional help for Kyiv.

Biden launched his address with a direct warning to Vladimir Putin, saying the Russian president “badly miscalculated” in believing the Western world was too divided to mount a unified defense on behalf of Ukraine – a massive effort that’s featured billions of dollars in both military and humanitarian aid.

“Putin is now isolated from the world, more than he has ever been,” Biden said. “And he will never, never weaken the resolve of the free world.

With his focus on Ukraine, Biden won plenty of hearty applause from both sides of the aisle – a show of bipartisanship, rare in today’s Washington, that the president’s speech seemed specifically designed to elicit. Indeed, Biden touched on a host of issues backed broadly by both parties, including promises to fix crumbling infrastructure, reform a broken immigration system, tackle the opioid epidemic and provide support for veterans. Not once did he mention last year’s attack on the Capitol.

“While it often appears that we never agree, that isn’t true,” Biden said.

But the reality of the entrenched political polarization on Capitol Hill was nevertheless on full display.

Far-right rabble-rousers like Reps. Lauren Boebert (R-Colo.) and Marjorie Taylor Greene (R-Ga.) repeatedly heckled the president during his speech with chants of “build the wall!”

And in an extraordinary breach of decorum, Boebert yelled out at Biden that he put American troops in coffins, “13 of them” – an apparent reference to the 13 service members killed in a bomb attack in Afghanistan last August amid the chaotic U.S. military exit from the country.

Boebert’s outburst came as Biden was talking about the scourge of American troops developing cancer due to exposure to toxic smoke from massive burn pits in places like Afghanistan and Iraq.

“A cancer that would put them in a flag-draped coffin,” Biden said.

“You put them in, 13 of them!” Boebert yelled out, drawing gasps and shouts of “whoa!” from shocked fellow lawmakers.

Despite the interruption, Biden pressed on to explain how the issue hits close to home for him: his late son, an Army veteran who served in Iraq, died of brain cancer in 2015.

“One of those soldiers was my son, Major Beau Biden,” Biden said.

There were other Republican concerns, some noting that the promotion of vague concepts – getting kids back to school, getting workers back to work – is far different than finding bipartisan agreement on specific legislation. And while Republicans cheered Biden’s tough words for Putin, they quickly shifted gears to hammer many of the individual items on the president’s domestic agenda, including efforts to expand the social safety net and overhaul the way elections are conducted around the country.

“It was a rehash of the Build Back Better plan,” said Rep. Stephanie Bice (R-Okla.), who was also skeptical of even the more popular plans Biden laid out. The president did not say “Build Back Better” at any point during the speech.

“Oftentimes the idea sounds great,” she said, “but it’s the details that actually tank it.”

Biden gazed out at an audience that looked much different than the one he’d faced last April, when he delivered his first joint address to Congress after his swearing in three months earlier. Then, COVID-19 numbers were up, vaccinations were low and the safety protocols governing the chamber required not only masks but also limited the number of lawmakers who could attend in person. Biden’s cabinet, along with the members of the Supreme Court, were absent altogether.

Eleven months later, the mask issue has grown only more contentious around the country, and Pelosi defused any controversy by announcing this week that there would be no requirement to wear one. Even those Democrats most diligent about masking around the Capitol – lawmakers like Sens. Ron Wyden (Ore.), Elizabeth Warren (Mass.) and Sherrod Brown (Ohio) – left them behind during Biden’s speech.

In all, only around a dozen Democratic lawmakers still donned masks during the address.

The threat of COVID-19 still hovered over the address, however. Lawmakers were spaced apart on the House floor and in the galleries above, and could not invite guests like at past addresses. Many chose to invite “virtual guests” instead.

All attendees were also required to get tested for COVID-19 the day before. Yet some Republicans blew right past those protocols.

Several House GOP lawmakers ignored the distancing measures and sat right next to each other. And while about half a dozen Republicans announced beforehand that they’d boycott the address due to the COVID-19 testing requirement, Boebert said that she was still allowed into the chamber despite not getting tested.

“Like all evil, COVID tyranny ends when you stand up to it! I refused to get tested tonight, and no one got in my way. We win when enough of us stand up and say we’ve had enough of this nonsense,” Boebert tweeted.

Security was a concern heading into the speech, not least because of a scheduled rally of truckers from around the country who’d threatened to descend on Washington this week to protest Biden’s COVID-19 policies. But that rally was a dud. And aside from a security fence installed around the Capitol building, the only noticeable precautions were those familiar to joint addresses of years past, including the bomb-sniffing dogs – yellow labs and German shepherds – being shepherded around the complex by Capitol Police.

For Biden’s Democratic allies, who are facing a tough midterm cycle and the real prospect of losing the House, the speech marked what they hope will be a turning point – one that resurrects their stalled legislative agenda and improves their odds in the midterms. First, however, they acknowledge the urgency of managing the crisis in Ukraine.

“It’s the issue that’s front and center for all of us – both the challenge that the world faces in dealing with Putin, but also making sure that we’re challenging ourselves to make sure that we can stop Putin and still protect the American family,” said Rep. Dan Kildee (D-Mich.). “And I think he laid out exactly how we’ll do that.”