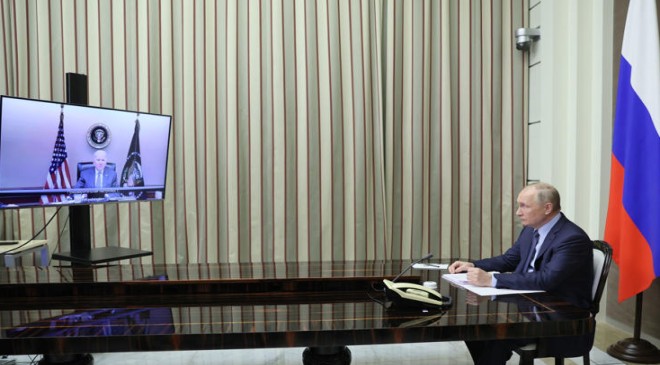 Experts said it was the first time the Kremlin, which has the world’s biggest nuclear stockpile, had made such an announcement since the Russian Federation was established in 1991.

U.S. officials have refused to say whether the Pentagon’s posture has changed in response to Putin’s announcement. White House press secretary Jen Psaki, speaking on MSNBC, said soon after that the United States has “the ability, of course, to defend ourselves, as does NATO” while describing Russia’s actions as an escalation to justify its actions in Ukraine.

While experts said they did not expect Putin to attempt any sort of nuclear strike on the West or a smaller-scale nuclear attack within Ukraine — where conventional Russian forces already have a major advantage — they said the fact the alert was occurring at a time when a major conflict is unfolding on NATO’s borders made it much more dangerous. Russia has nearly 6,000 warheads, slightly more than the United States’ approximately 5,400, according to the Federation of American Scientists.

What has changed since Putin’s order?

The Pentagon is busy trying to decipher exactly what Putin meant by Sunday’s order. Nuclear forces, both for the United States and for Russia, always maintain a state of heightened readiness so that any order can be executed immediately.

“We aren’t exactly sure what the order means. It’s not a classic doctrinal term, so we are reviewing it, watching and analyzing,” a senior U.S. defense official, speaking on the condition of anonymity under ground rules set by the Biden administration, said Monday. “We haven’t seen anything result from this announcement that gives us less confidence in our deterrence posture.”

Russian Defense Minister Sergei Shoigu informed Putin that additional personnel had been sent to nuclear command posts, according to a report by the Associated Press, but it was unclear if there had been any other tangible changes.

How does this alter the risk of violence?

The move follows Putin’s warning, in a speech last week announcing his operation in Ukraine, that outside countries interfering in Ukraine would face consequences “such as you have never seen in your entire history,” a remark many analysts saw as a nuclear hint.

The war in Ukraine is already a tense and fluid environment. More planes are in the air, more ships are at sea, and as Russian and Western militaries encounter each other in different parts of the world, the stakes of a miscalculation or mistake grow higher.

“When you introduce the element of nuclear forces, it raises the specter of miscalculation involving nuclear weapons,” Kimball said.

While Russia’s own military doctrine lays out the potential use of nuclear weapons only in the event the existence of its state is at risk, some Russia experts say its true trigger point may fall beneath that threshold.

One potential solution is a deconfliction line, which U.S. and Russian commanders have used in the past to call their counterparts and inform them about military activity. The hotline has been used before, including in Syria, to minimize the risk of jets colliding, for instance, or another unintended altercation.

“There is no deconfliction mechanism in place right now. But certainly we understand the importance of deconfliction particularly now that the airspace over Ukraine is contested and some of that airspace butts right up against NATO territory,” Pentagon press secretary John Kirby told reporters Monday.

There are no indications Russia is interested in such an efforts, he added, saying, “It’s got to be a two-way street.”

Have similar orders been given in the past?

Until now, the post-Cold War era has not seen a nation raise its nuclear alert status to threaten or coerce other countries, Kimball said, calling Russia’s move unprecedented and unnecessary.

But broadly, putting nuclear forces on alert to alter behavior of an adversary is not new and was done during the Cold War several times, Kimball said.

President Richard M. Nixon secretly escalated the nuclear posture in 1969 in a bid to push the Soviets into concessions over Vietnam, which did not work.

In 1995, Russia scrambled to make sense of a rocket that appeared on early warning radars detected off the Norwegian coast, and within minutes, President Boris Yeltsin was brought his black nuclear-command suitcase. The rocket, the Russians learned, was benign and launched to study the Northern Lights.