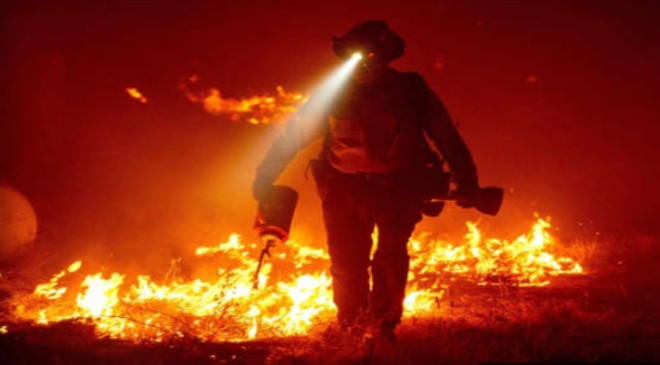 The global incidence of extreme wildfires is projected to surge by 50 percent by the end of the century – leaving almost no landscape invulnerable to this climate-driven danger, a new report from the United Nations has found.

Both shifts in land use and warming climate conditions will make such blazes more frequent and intense, increasing the number of wildfires worldwide by up to 14 percent in 2030, 30 percent in 2050 and 50 percent in 2100, the authors stated. These fires will reach as far as the Arctic, but governments remain wholly unprepared for battle, according to the study, published by the U.N. Environment Program (UNEP) and the Norway-based nonprofit GRID-Arendal.

“Current government responses to wildfires are often putting money in the wrong place,” UNEP Executive Director Inger Andersen said in a statement. “Those emergency service workers and firefighters on the frontlines who are risking their lives to fight forest wildfires need to be supported.”

The report, called “Spreading like Wildfire,” therefore calls for a radical change in government spending and a shift of investments from reactivity and response to prevention and preparedness. The publication calls upon governments to adopt a so-called “Fire Ready Formula,” with two-thirds of spending allocated to planning, prevention, preparedness and one-third remaining for response.

Current response efforts usually receive more than half of such investments, while planning and prevention initiatives get less than 1 percent, according to the authors.

Key to honing such prevention strategies will be combining data and science-based monitoring systems with indigenous know-how, as well as strengthening regional and international partnerships, the authors stated.

“We have to minimize the risk of extreme wildfires by being better prepared: invest more in fire risk reduction, work with local communities, and strengthen global commitment to fight climate change,” Andersen said.

Today’s wildfires disproportionately affect the world’s poorest nations, with residual impacts extending days, weeks or even years after the flames turn to ash, according to the study.

These circumstances, the authors contended, are deepening existing social inequalities. For example, they explained, inhalation of smoke can lead to poor respiratory and cardiovascular health, while pollutants from wildfires can degrade waterways and cause soil erosion.

Meanwhile, the funds necessary to rebuild infrastructure may be beyond the financial needs of certain communities, according to the authors.

Wildfires are both becoming worse due to climate change and worsening climate change, the authors stated, describing the two phenomena as “mutually exacerbating.” Hotter, drier, windier conditions are fanning the flames, while wildfires are destroying carbon-rich ecosystems like peatlands and rainforests, the study found.

With natural habitats deteriorating, some animal and plant species have been pushed toward the brink of extinction – as in Australia’s 2020 bushfires, which decimated billions of animals, the authors stated, citing a study in Nature Ecology & Evolution.

Some areas that are “likely to experience a significant increase in burning by the end of the century” include parts of the Arctic, Indonesia’s tropical forest and the southern Amazon – assuming greenhouse gas emissions continue at their present rate, the study warned.

“There is a critical need to better understand the behavior of wildfires,” a statement from the authors said. “Achieving and sustaining adaptive land and fire management requires a combination of policies, a legal framework and incentives that encourage appropriate land and fire use.”