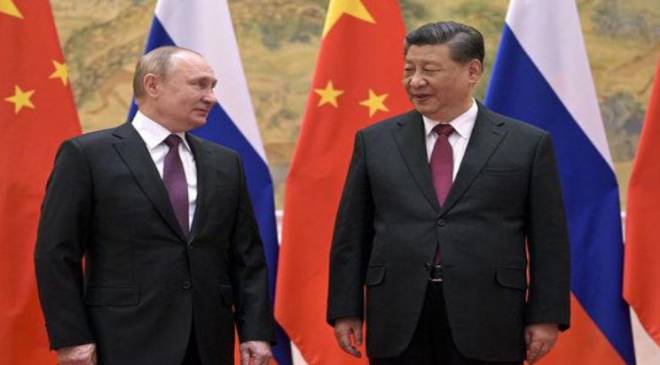 A shared interest in confronting the U.S. has driven the China-Russia relationship to its closest point since the early years of the Cold War seven decades ago.

But since Chinese President Xi Jinping this month gave his Russian counterpart his strongest support to date in Moscow’s standoff with the West, Beijing has been calling for a resolution of the crisis through diplomatic channels, aligning its position closer to that taken by the U.S. and its allies.

The shift in tone, say Chinese diplomats and advisers to the Chinese government, comes after days of closed-door deliberations by top leaders and reflects Beijing’s desire to avoid an even more adversarial relationship with Washington that could cause China to be isolated from the West and hurt the country’s development in the long run.

“China still wants to hold together the relationship with the U.S.,” said Wang Huiyao, a government adviser and president of the Center for China and Globalization, a Beijing think tank.

Speaking to Europe’s pre-eminent annual strategic forum Saturday, China’s Foreign Minister Wang Yi used some of the clearest language yet by a senior Chinese official in seeking to temper a Russian offensive against Ukraine. “The sovereignty, independence and territorial integrity of any country should be respected and safeguarded,” Mr. Wang told the Munich Security Conference by video link. “Ukraine is no exception.”

His comments followed Mr. Xi’s remarks three days earlier, when the Chinese leader, in a phone conversation with French President Emmanuel Macron, also called for dialogue to resolve the Russia-Ukraine crisis, remarks indicating a desire not to push European countries further away.

By contrast, when Mr. Xi endorsed Russia’s opposition to any expansion by the North Atlantic Treaty Organization in his Feb. 4 joint statement with President Vladimir Putin, it left out any mention of Ukraine. That statement was issued when Mr. Putin attended the opening of the Beijing Winter Olympics as Mr. Xi’s guest of honor.

Behind the Beijing-Moscow joint stance against NATO enlargement is Mr. Xi’s eagerness to show solidarity with Mr. Putin as both countries’ ties with the U.S. have soured, according to people with knowledge of Beijing’s thinking. Just as Russia is worried about threats to its security from any NATO expansion, one of the people said, China is concerned about “its territorial integrity as a result of the U.S. meddling in Taiwan.”

“They feel like they’re in the same boat,” the person added. Beijing sees Taiwan as Chinese territory and bringing the self-governing island into its fold as part of Mr. Xi’s “China Dream” of national revival.

However, China’s leadership appeared to have underestimated the reaction to the Feb. 4 statement from the rest of the world.

Many in Washington and Brussels saw the entente as one of the clearest signals yet that Beijing intends to join forces with Moscow to reshape the global order closer to their two countries’ authoritarian vision. That, on top of Beijing’s coercive behavior toward countries from Australia to Lithuania and increased military activities near the Taiwan Strait, has offered more support for President Biden’s effort to work with allies to guard against China.

While tilting closer to Moscow, the Chinese leadership still sees it in its interest not to have the bottom fallout of its ties with the U.S. It needs continued access to American financial and technological resources to ensure economic security and development—an access that could be jeopardized should Beijing decide to help Moscow evade sanctions in the event of an invasion.

“China recognizes its relationship with the U.S. is contentious and competitive,” said Bonnie Glaser, director of the Asia program at the German Marshall Fund, a Washington-based think tank. “But they don’t want to be pushed into the Russian camp.”

Beijing started to make clear its position against an invasion of Ukraine as its topmost decision-making body, the Politburo Standing Committee, reappeared in public view. Over more than a week, the seven-member group had huddled behind closed doors for discussions, including how to respond to the Russia-Ukraine crisis and manage China’s partnership with Russia without hurting Beijing’s own interests.

The latest, more explicit remarks, mentioning Ukraine by name, indicate Beijing for now has settled on a strategy to oppose a Russian invasion of the Eastern European country while continuing to blame the U.S. and its allies for hyping the threats from Russia. In Beijing’s view, say Chinese diplomats and government advisers, that serves its interests in preventing outright hostility with the U.S.-led Western world and in maintaining its principle on opposing any country’s interference in another country’s internal affairs.

Meanwhile, Beijing is set to kick off a series of events to commemorate the 50th anniversary of former President Richard Nixon’s trip to China. The seven-day visit in 1972 paved the way for the resumption of diplomatic ties between the two countries and set the stage for China’s opening to the world.

The purpose of the events, Chinese diplomats say, is to encourage scholars, business people and others to speak up for the need for continued engagement between the two world powers. As the Biden administration continues a hard line on China started by President Donald Trump, Chinese diplomats have complained about the difficulty in getting meetings with administration officials.

One event planned in connection with the Nixon visit anniversary, for instance, is a roundtable discussion with more than two dozen international business executives, to be held on Thursday by the Center for China and Globalization, the think tank headed by Mr. Wang, the government adviser.

“We’d like to show the room for development in China’s market is still huge for American and other foreign companies,” Mr. Wang said.