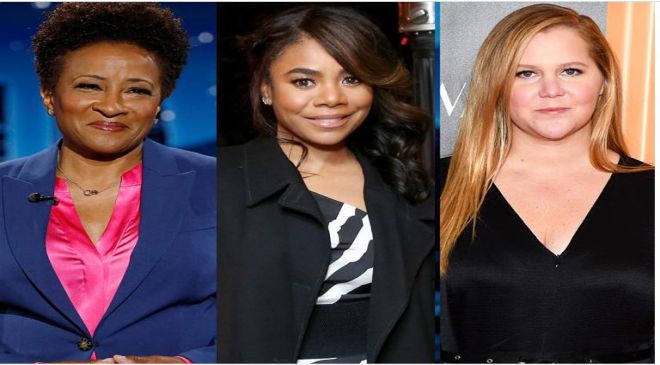 The producer of the Oscars telecast, Will Packer, originally want to bring on two hosts for each hour, but now the award show—slated for Sunday, March 27—is aiming to have three hosts in total, according to The New York Times.

Per The Hollywood Reporter, three people haven’t hosted the Oscars in 35 years and the 2022 show will mark the first time “that many women held the emcee position in a single evening.” The outlet notes that each comedian will host a one-hour block of the ceremony, with Amy kicking off the show.

Three hosts is quite different from the past three years of ceremonies, when there was no host at all. The most recent host was Jimmy Kimmel in 2018. Other recent emcees include Chris Rock in 2016, Neil Patrick Harris in 2015 and Ellen DeGeneres in 2014, when she created the infamous selfie from the ceremony that was the most retweeted photo in history until 2017.

When the award show was without a leading host, a long lineup of actors and celebrities presented each award instead.

As for the monologue, Tina Fey, Maya Rudolph and Amy Poehler introduced the ceremony with a comedic skit in 2019. In 2020, Janelle Monáe performed two musical numbers and, last year, Regina King opened the Oscars with a monologue reflecting on racism in the U.S. and within the film industry.

The 2021 Oscars were filmed in-person from multiple locations after being postponed from February to April due to the pandemic. This year’s ceremony was pushed back as well, from Feb. 27 to March 27.

Among the nominees for the 2022 Oscars are Kristen Stewart nominated for her leading role in Spencer, Andrew Garfield for his leading role in Tick Tick… Boom! and Ariana DeBose for her supporting role in West Side Story.

The nominated stars and filmmakers in attendance will without a doubt be entertained by Wanda, Amy and Regina, who are no strangers to hosting gigs.

Wanda previously hosted a talk show, The Wanda Sykes Show, from 2009 to 2010 and even hosted the White House Correspondents’ Dinner in 2009, pulling laughs out of the 44th U.S. President Barack Obama.

Meanwhile, Amy took the stage of the 2015 MTV Movie Awards, before releasing her film Trainwreck, and Regina hosted the 2019 BET Awards, introducing the show with a memorable mashup performance of “Do You Know What Time It Is?,” “Da Butt” and “Run Joe.”

The Academy plans to officially announce the hosts of the ceremony Tuesday, Feb. 15, on Good Morning America, according to Deadline.

ENews reached out to actresses’ reps and to the Academy for comment.Don’t miss E!’s red carpet coverage of the 2022 Oscars on Sunday, Mar. 27 followed by the Academy Awards telecast on ABC.Join the conversation