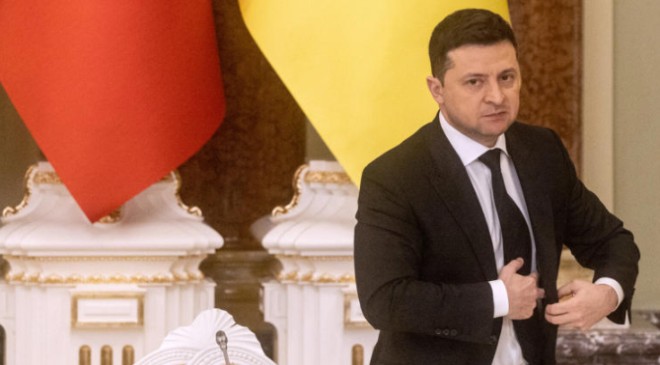 KYIV, Ukraine — Russian attack helicopters were spotted buzzing within miles of his country’s borders on Sunday. The last strands of diplomacy were unraveling. Allies evacuated their embassies, airlines canceled flights, and a large number of private jets departed from the capital.

For Volodymyr Zelensky, Ukraine’s president and a former comedic actor who was elected three years ago on a message of optimism about his country’s relations with Russia — something that now seems a distant memory — room for maneuver narrowed over the weekend to a tiny selection of uncertain options.

During a phone call on Sunday with President Biden, Mr. Zelensky issued an invitation for a visit, so the American president could “contribute to de-escalation” with his presence in Kyiv, the Ukrainian capital. The United States has already ordered most American diplomats to leave, making a presidential visit unlikely.

“I am convinced that your arrival in Kyiv in the coming days, which are crucial for stabilizing the situation, will be a powerful signal,” Mr. Zelensky said, according to an official Ukrainian account of the conversation, adding that the Ukrainian capital was “safe and under reliable protection.”

Mr. Zelensky also thanked Mr. Biden for American support, including airlifts of armaments, and said, “We hope that, among other things, it will help prevent the spread of panic.”

What is perhaps Europe’s most intense security crisis since the end of the Cold War appears to be nearing a climax, with Washington warning that a Russian invasion of Ukraine could begin at any moment. But the 44-year-old Ukrainian president is clinging to the strategy he has pursued for months, using every appearance to caution against panic and overreaction, to the point of seeming nearly delusional about the grave risks his country faces.

From early in his presidency, Mr. Zelensky was seen as a novice playing a high-stakes game with a shrewd and experienced opponent, President Vladimir V. Putin of Russia. And gaps have opened with allies in recent weeks as Mr. Biden and leaders of Europe’s great powers have raised a global alarm, treating the threat of an invasion much more seriously than Mr. Zelensky has publicly.

Mr. Zelensky has remained engaged in diplomacy even as no clear path to a settlement is in focus, while instructing his military to signal, as it said in a statement over the weekend, that Ukraine is “absolutely ready to fight.”

Adhering to a disciplined public relations strategy has been a hallmark of Mr. Zelensky’s tenure, seen as springing from the background he and important aides share in the entertainment industry.

Supporters say he has little choice but to project calm whatever the circumstances, lest Ukrainians make runs on banks or grocery stores.

Ukraine is now nearly surrounded by Russian and Russian-backed forces on a high level of readiness, with the start of Russian naval exercises on the Black Sea on Sunday completing the noose in the south. Russian officials have said they do not intend to invade Ukraine.

Adding to the sense of alarm, some of Mr. Zelensky’s main allies reduced staffing or evacuated embassies in Kyiv over the weekend. The United States announced a drawdown at the American Embassy except for a “core team” of senior diplomats, citing the risk of combat. Canada announced a pullback of diplomats to the western city of Lviv.

Russia, too, said it had decided to reduce the staffing of its missions in Ukraine.

Mr. Zelensky has criticized the evacuation of diplomats as needlessly alarmist and remained defiant, playing down the threat to his country — despite some of the most ominous military moves in Europe in decades.

“The best friend for enemies is panic in our country,” he told reporters in southern Ukraine on Saturday, where he observed a police training exercise. Even that choice of venue was significant: The police drilled in anti-riot skills to prevent internal unrest, not a foreign invasion. Mr. Zelensky skipped public appearances at military exercises also underway in Ukraine.

Also over the weekend, the Dutch airline KLM halted flights to Ukraine, and air travel more broadly seemed to be at risk as airline insurers reacted to the U.S. warnings of an imminent war.

Mr. Zelensky’s Ministry of Infrastructure scrambled on Sunday to assure airlines, saying the government had not closed the airspace and suggesting it might step in to safeguard airplanes.

The flight cancellations helped drive home to Ukrainians the seriousness of the military risk. But the infrastructure ministry made no mention of war. It blamed the flight disruptions vaguely on “fluctuations in insurance markets.”

Also over the weekend, the U.S. military said it had withdrawn about 150 National Guard soldiers who were assisting the Ukrainian military as trainers. No matter, Mr. Zelensky seemed to signal: “As a state, we must count on ourselves, on our military, on our citizens.”

A Ukrainian news outlet, Ukrainska Pravda, which has monitored airplane travel through flight tracking sites, reported that on Sunday the largest number of private and chartered jets departed Kyiv in a single day since the group began watching flights six years ago, indicating the country’s elite was getting out.

In another ominous sign on Sunday, American members of a cease-fire observer mission by the Organization for Security and Cooperation in Europe to the separate eastern Ukraine conflict packed up and left their hotel, Reuters reported, and British observers pulled out of territory held by Russian-backed separatists to Ukrainian-held areas, local media reported.

The departure of the observers from the front line, just as the risk of war looms, leaves Ukraine with fewer chances that international monitors will be able to report separatist troop movements that might telegraph the start of military action.

Over the weekend, a key adviser to Mr. Zelensky said he saw greater chances for a diplomatic solution than for war, though the diplomacy around the Russian troop buildup has grown threadbare.

On Monday and Tuesday, the German chancellor, Olaf Scholz, will visit Kyiv and Moscow. A German official, speaking on background in Berlin, said he did not expect a breakthrough, and it was unclear whether a specific settlement proposal was on the table.

Mr. Scholz, in his meeting with Mr. Putin, will seek to gain a better understanding of Russia’s goals and ascertain if there are options for de-escalation, the official said.

Mr. Zelensky’s optimism, while clearly intended to head off panic, has deeper roots.

Even as a teenager, growing up in a Russian-speaking Jewish family in an industrial city in central Ukraine, Mr. Zelensky took part in stand-up comedy competitions. He eventually founded his own studio, Kvartal 95, whose shows and movies became hits throughout the former Soviet Union.

In one show, “Servant of the People,” Mr. Zelensky played an idealistic schoolteacher whose tirade against corruption goes viral. The message was so popular that Mr. Zelensky started a political party named for the show, and won the real presidency and a majority in Parliament in elections in 2019.

Like the fictional leader he portrayed, Mr. Zelensky campaigned on a sunny vision of turning a new page for Ukraine and negotiating a peace settlement with Russia.

Mr. Zelensky had hoped for diplomatic backup from the United States in negotiations to end the war with Russian-led separatist in eastern Ukraine, which has been going on for eight years and is distinct from the new threat of a direct Russian attack.

But that strategy unraveled in the events that led to the first impeachment of former President Donald J. Trump, in a first setback for the Ukrainian leader.

As Mr. Zelensky sought U.S. diplomatic support, the U.S. envoy, Kurt Volker, instead worked alongside Mr. Trump’s personal lawyer, Rudolph W. Giuliani, not to negotiate matters of war and peace but rather to request that Mr. Zelensky investigate Mr. Trump’s political opponent, Joseph R. Biden Jr. The requests led ultimately to Mr. Trump’s infamous phone call asking Mr. Zelensky to “do us a favor” and hinting about withholding military aid for Ukraine if he did not.

One result has been distrust by Mr. Zelensky and his top officials of any dealings beyond those directly with the White House, and some disdain for the U.S. foreign policy establishment, as seen in his criticism of American moves to remove diplomats from Ukraine.

Early in his tenure, Mr. Zelensky had floated ideas of resolving the conflict with Russia by wielding Ukraine’s soft power as the largest democracy in the former Soviet Union.

But not long after his election, he had also hinted at a stubborn streak. In Ukraine’s dealings with Russia, he had suggested, the country wouldn’t bend. He promoted the establishment of a Ukraine-based, Russian-language television station to broadcast into breakaway areas in the east that could also be accessible online in Russia.

“Ukraine will not give up on its mission to serve as an example of democracy for post-Soviet countries,” he said in his first speech on Russian policy after his election in 2019. Ukraine would resist, and accept help wherever it could, from “everyone who is ready to fight side by side with us for our freedom and for yours.”