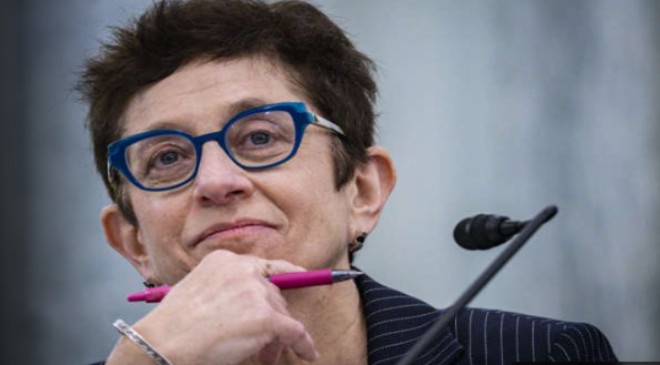 President Joe Biden’s pick to fill the vacant seat on the five-member Federal Communications Commission pushed back against Republican lawmakers during her second confirmation hearing before the Senate Commerce Committee on Wednesday, stating she has been the subject of “unrelenting, unfair, and outright false criticism and scrutiny.”

Republicans on the committee and industry lobbyists have raised issues with Gigi Sohn’s nomination that have delayed a vote. Sohn, who has spent 30 years as a public interest advocate, has attracted opposition from several Republicans, who’ve painted her as an extreme partisan.

Sohn’s confirmation as the fifth member of the FCC is important because it would break a 2-2 deadlock on the commission between Republicans and Democrats. If Sohn manages to make it through the committee and get approved by the full Senate, her confirmation would pave the way for the restoration of Obama-era net neutrality protections and for the agency to act on other matters.

Sohn acknowledged Wednesday during the hearing that the criticism and attacks against her led by Republicans are more about delaying the vote on her nomination and keeping the commission deadlocked than it is about her.

“I realize that this isn’t all about me,” she said. “It’s about some wanting to stop the FCC from doing its important work”

Nominated to the FCC in October, Sohn had her first confirmation hearing before the Senate Commerce Committee in December. She has been waiting for more than a month for the committee to hold a vote. In January, Sen. Roger Wicker, a Republican from Mississippi and the ranking member of the committee, called for a new hearing on Sohn to look specifically at her time on the board of Locast, which streamed broadcast TV signals and was shut down after losing a copyright infringement lawsuit mounted by major broadcasters. A vote on her nomination was called off at the last minute last week after Sen. Ben Ray Luján, a Democrat from New Mexico, suffered a stroke.

Wicker, who received a confidential copy of the settlement agreement, said he had concerns that Sohn would be financially liable to companies she would regulate. Sohn testified Wednesday that she has no financial liability as part of that settlement, which had been negotiated by Sports Fans Coalition of New York, the nonprofit that owned Locast, and the broadcasters.  Still, Wicker has taken issue with other aspects of the agreement, which he claimed Sohn deliberately withheld from the committee when previously testified.

“Ms. Sohn has not been forthcoming on this settlement,” Wicker said. “This raises questions as to what else she is not revealing about this litigation.”

Sohn testified that the confidential settlement barred her from speaking publicly about details of the settlement.

After Wicker had made his concerns known in January, Sohn said she would voluntarily recuse herself from certain matters associated with issues identified in the Locast lawsuit, a move that has been criticized by the cable industry’s lobbying group.

Because of the strong opposition from Republicans, every Democrat on the committee is needed to vote in favor of Sohn’s nomination to move it to the full Senate. But with Luján unable to vote until his return, Sohn’s nomination will likely continue to be on hold.

The FCC’s deadlock since Biden took office a year ago has left the agency unable to act on controversial issues like media ownership or a vote to bring back net neutrality. If Sohn is confirmed by the Senate, the Democrats will have their majority and will be poised to fulfill Biden’s promise to get net neutrality regulations back on the books.

Sen. Tammy Baldwin, a Democrat from Wisconsin, noted the consequences of the process dragging.

“Every day that [Sohn’s] confirmation is delayed is a day when the FCC cannot fully discharge the important responsibilities that we have given it,” she said

The next era of net neutrality

Net neutrality is the principle that all traffic on the internet should be treated equally, regardless of whether you’re checking Facebook, posting pictures to Instagram or streaming movies from Netflix or Prime Video. It also means companies like Comcast, which owns NBCUniversal, can’t favor their own content over that of a competitor.

Supporters of net neutrality say rules are necessary to ensure broadband companies aren’t taking advantage of their power over the infrastructure that delivers content to your internet-enabled TVs, laptops, tablets and smartphones. But broadband companies and Republicans in Congress and on the FCC say the old rules gave the agency too much power, stifling broadband investment.

The result for the past decade has been a ping-ponging of federal net neutrality regulations based on the political party in charge.

With a 3-2 majority, restoring net neutrality rules that Republicans dismantled in 2017 will likely be the No. 1 priority on Democrats’ agenda. Chairwoman Jessica Rosenworcel, who’s now in her third term on the FCC, was a commissioner who voted for the 2015 rules. She also voted against the repeal in 2017 and was outspoken about her opposition. Sohn has spent much of her career advocating for net neutrality protections. As an adviser to Wheeler, she helped craft the 2015 rules.

The real question is how far the agency will go in terms of reestablishing the rules. In addition to prohibiting broadband companies from blocking or slowing down access to certain sites or services, the Democrats on the FCC are likely to see re-establishing the agency’s Title II authority over broadband as its most important objective in a rewrite of the rules. Under the 2015 rules, the agency intentionally limited some of that authority in an effort to appease the broadband industry. Now there’s a question of whether the Biden FCC will do the same in writing a new set of rules.

Sohn’s critics worry she’ll push for broader changes, such as rate regulation. Wicker emphasized this concern during Sohn’s confirmation hearing in December. He said he prefers a light-touch approach to regulation.

Sohn said she agrees that “light touch is better.” But she added that since the repeal of net neutrality in 2017 the FCC has had no authority over broadband. And that’s a problem.

“What I’m concerned about … is that we have no touch,” she said. She added that the net neutrality debate of today is not just about preventing internet service providers from blocking and throttling access to content.

“It’s about whether broadband, which we all agree is an essential service, should have some government oversight,” she said. “And right now it doesn’t.”

But when it comes to concerns that Sohn would push for the FCC to set broadband prices, Sohn stated in December and reiterated on Wednesday at her second hearing that she would not support FCC rate regulation.

“At the last hearing, I expressly disavowed any support for the FCC implementing rate regulation,” she said. “The FCC tried to do it with cable in the ’90s, and it didn’t work out well…so no, I would not support it.”

Though Democrats will be eager to get started, the process to reinstate net neutrality and reestablish FCC authority won’t be quick. Once Democrats gain a majority, they’ll have to issue a notice of proposed rulemaking and open the proposal for public comment. All told, new rules wouldn’t likely be in place for at least a year.

Net neutrality isn’t the only concern that some Republicans have had with Sohn. During her Senate Commerce Committee hearing in December and again at her hearing Wednesday, several Republican senators took her to task for statements she had made on Twitter, including a 2018 tweet in which she questioned whether Sinclair Broadcast Group should have a broadcast license and another tweet in 2020 in which she called Fox News “state-sponsored propaganda.”

Sen. Dan Sullivan a Republican from Alaska, said he was “very disturbed” by these tweets.

“I don’t see how you can be unbiased,” he added.

Sohn said her opinions she voiced in her capacity as a public interest advocate would have no bearing on her role as an FCC commissioner, although she acknowledged she wished her tone had been less sharp.

Democrats on the committee, including Sens. Richard Blumenthal of Connecticut and Ed Markey of Massachusetts, defended Sohn and called claims she would be biased a “double standard” considering the committee has in the past approved nominees who have worked for companies the FCC regulates. Specifically, they pointed to former FCC Chair Ajit Pai, a Republican, who had served under former President Donald Trump.

“If [Ajit Pai] was qualified to be on the FCC, then Ms. Sohn is certainly qualified to be on the FCC, having spent more than 30 years working for the public interest of telecommunications policy,” Markey said. “And I would note that Chairman Pai did not recuse himself from any telecommunications issues, even though he had worked for Verizon before he arrived at the Commission.”

In spite of Republican criticism, some conservative broadcasters have defended Sohn. Newsmax CEO Chris Ruddy put out a statement saying he supported both of Biden’s nominees for the FCC. One America News Network President Charles Herring also endorsed Sohn.

Sohn has repeatedly said she believes she’s “been characterized very unfairly as being anti conservative speech. My record says otherwise.”

It’s a sentiment others who’ve worked with Sohn have also expressed.

“I think there’s this mischaracterization of Gigi,” said Greg Guice, Public Knowledge’s director of government affairs. Guice said he’s known Sohn for 18 years. “She is oriented towards advocating for good policy. She has a very good network of people on both sides of the aisle, and she really listens to both sides.”