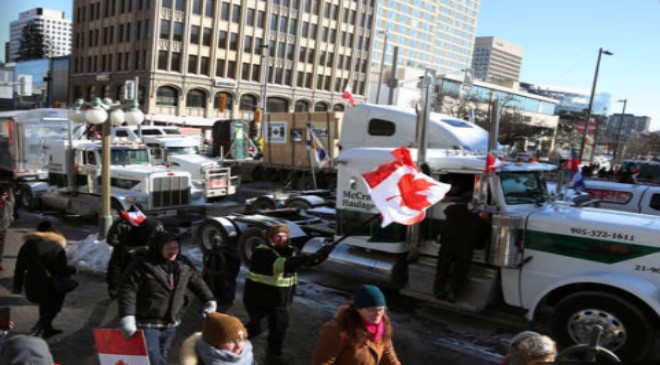 (Bloomberg) — Hong Kong is set to report a record of over 600 infections as cases double every three days, putting pressure on the government to ramp up restrictions. Australia will allow double-vaccinated visa holders to enter the country from Feb. 21, ending about two years of strict international border controls.

China locked down a city of 3.6 million people, and a top epidemiologist said the country has no plans to adjust its zero-Covid policy. Beijing reported new infections among arrivals for the Winter Olympics.

Canada’s capital Ottawa declared a state of emergency as police struggled to rein in protests largely among truckers against vaccine mandates. A group of demonstrators have also blocked roads and targeted businesses in the Australian capital of Canberra.

Indonesia has tightened mobility restrictions in Jakarta, Bandung and Bali to the second-highest level as omicron cases continued to spread rapidly. The restrictions, which include limiting capacity at public places and reducing operating hours for cafes and restaurants, will be implemented for one week, according to Luhut Panjaitan, a cabinet minister who oversees the nation’s pandemic response in Java and Bali.

India’s drug regulator approved the use of Sputnik Light to boost vaccination efforts, the federal health minister tweeted late Sunday. The ninth vaccine added to India’s list of inoculations comes as the country continues its downward trend in infections, reporting 83,876 new cases on Monday, the lowest since Jan. 5.

Australia will allow double-vaccinated visa holders to enter the country from Feb. 21, ending around two years of strict international border controls introduced to stem the spread of Covid-19.

The announcement is the final step in a gradual unwinding of international border restrictions, which kicked off in November. Still, Western Australia remains closed to the rest of the country, after delaying its domestic border reopening.

The decision to allow vaccinated international arrivals comes as Covid infections, hospitalizations and intensive care admissions trend down in most parts of the country.

Hong Kong is set to report a record of over 600 coronavirus infections on Monday as cases double every three days, putting pressure on the government to ramp up restrictions as it holds fast to the goal of eliminating the virus.

The surge has been accompanied by a jump in untraceable infections, suggesting a significant number of silent chains of transmission in the community.

Hong Kong’s pursuit of Covid Zero has seen its health-care infrastructure straining under the pressure of stringent tracking and isolation measures that have sent thousands of people into quarantine or hospital. The government has already signaled that it might tighten social-distancing measures

A southwestern Chinese border city was locked down after mass testing identified nearly 100 people with Covid, yet another outbreak that’s extending the country’s protracted battle to bring its Covid infections back to zero.

A total of 98 people tested positive on Sunday in Baise, a city of 3.6 million people next to Vietnam in the southwestern Chinese province of Guangxi. Travel was banned within the city and to the rest of China to prevent the virus from spreading further. All residents were asked to stay at home.

China has no plans to adjust its zero-Covid-tolerance policy for the time being, Wu Zunyou, chief epidemiologist with the Chinese Center for Disease Control and Prevention, told the Global Times in an interview.

A group of anti-vaccination demonstrators and conspiracy theorists have blocked roads and targeted businesses in the Australian capital of Canberra ahead of the return of federal parliament on Tuesday.

Hundreds of cars and trucks waving Australian flags, military insignia and campaign banners for former U.S. President Donald Trump descended on the city over the past week to call for the end to vaccination requirements in businesses and places of employment.

The protests in Canberra have echoed similar demonstrations in the Canadian capital Ottawa.

The Philippines started giving Covid-19 shots to children aged 5 to 11, after receiving 780,000 Pfizer doses last week. The Southeast Asian nation aims to inoculate 15.5 million from this age group, as economic managers see allowing more activities for kids and their families as key to reviving consumer demand.

South Korea’s daily cases could increase to up to 130,000-170,000 at the end of February with the surge of the omicron variant, the Korea Disease Control and Prevention Agency said. The numbers are based on forecast modeling conducted by experts.

President Moon Jae-in said it is a serious situation as it’s difficult to predict how much the number of confirmed cases will increase and when the peak will be. But he said there is no need to be too concerned about the current situation. South Korea confirmed 35,286 more cases on Monday.

The ministry will encourage people to live with the virus rather than cope with lockdowns, the newspaper reported. Opas didn’t give details of measures that may be relaxed.

Japanese Prime Minister Fumio Kishida set a target of speeding booster vaccinations to a million shots a day by the end of the month, as two new polls showed his support falling.

While most of the population has received two doses of a vaccine, only about 5% has received a third shot, by far the lowest among advanced nations.

Canada’s capital declared a state of emergency Sunday as police struggled to rein in ongoing protests against vaccine mandates.

Ottawa Mayor Jim Watson, who declared the emergency, said in a statement that the increasingly rowdy demonstrations posed a “serious danger and threat to the safety and security of residents.” Hundreds of trucks continued to occupy the downtown area near Canada’s parliament with no sign that the protesters planned to leave.

The protests started in reaction to Canadian and U.S. laws that went into effect in January, requiring truckers crossing the border to be fully vaccinated. They have since morphed into a rally against Covid restrictions more broadly.

The Reserve Bank of India’s monetary policy committee will now meet Feb. 8-10, the authority said in a statement late Sunday. Its decision will be announced Thursday.

Mangeshkar, known as the “Nightingale of India,” received her home country’s highest civilian award during a career spanning more than six decades, as well as love and respect for her music from across the subcontinent. She had been hospitalized since Jan. 8 after testing positive.

Most Read from Bloomberg Businessweek

ath of celebrated singer Lata Mangeshkar after being diagnosed with Covid-19. She was 92.