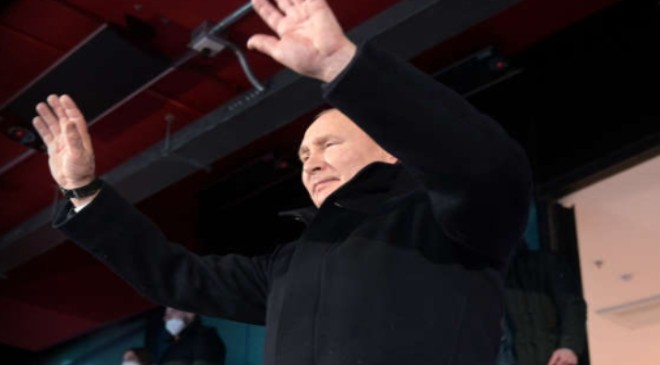 As the diplomatic standoff between the West and Russia over Ukraine deepens, Russian President Vladimir Putin found a friendly audience in Chinese President Xi Jinping Friday, when the two leaders affirmed mutual grievances about the U.S.-led international order.

The significance of Putin and Xi’s meeting on the eve of the Beijing Winter Olympics was not lost on the United States, and Daniel Kritenbrink, the top U.S. diplomat for East Asia, said that Moscow and Beijing have grown more closely aligned. But if Russia chooses to invade Ukraine again, the move could “embarrass Beijing” because “it suggests that China is willing to tolerate or tacitly support Russia’s efforts to coerce Ukraine,” he told reporters Friday.

Ukraine was not mentioned in a sweeping joint document issued by Moscow and Beijing that framed their geopolitical ambitions — experts suggest the omission means China won’t give potential Russian aggression a blank check — but the statement complained about U.S.-led partnerships in the Asia-Pacific.

The declaration also did not mention the “Quad” group of democracies — the United States, Japan, India and Australia. But Kritenbrink indicated leaders of the four countries would address the Ukraine crisis at a summit later this spring “given the seriousness of the issue and the threat it poses to the rules-based global order.”

The already-tense war of words between the West and Moscow escalated further Friday. Earlier this week, the Biden administration warned that Russia is considering filming a fake attack against Russian territory or Russian-speaking people by Ukrainian forces as a pretext to invade its neighbor. The resulting propaganda footage could include “graphic scenes of a staged false explosion with corpses,” U.S. officials said.Wetlands and radioactive soil: How Ukraine’s geography could influence a Russian invasion

The allegations — which Washington has not provided substantial evidence for — have drawn fierce denials from Moscow. On Friday, the Russian Embassy in Washington released a transcript of an exchange between Ambassador Anatoly Antonov and Newsweek, in which the diplomat said the U.S. accusations could be used as an “alibi” for a possible Western-backed military operation in Ukraine’s contested Donbas region. Anti-Kyiv separatists there have the backing of Moscow.

“This lie is part of the information war against Russia,” Antonov said, without presenting proof. “Washington has been provoking the whole world for several months with statements that Ukraine is about to become a victim of ‘Russian aggression.’”

In recent months, the Kremlin has massed more than 100,000 troops and heavy weaponry around smaller Ukraine, from which it annexed Crimea in 2014. The threat of renewed Russian aggression has prompted the West to rush military equipment to Ukraine, which is not part of NATO, and bolster troop numbers on the military alliance’s eastern flank.

As the United States deploys some 3,000 U.S. troops to Europe as a sign of reassurance for NATO allies, German Chancellor Olaf Scholz is walking a tightrope between standing unified with Washington and navigating Berlin’s close economic ties with Moscow.

Scholz, who took over from the crisis-vetted Angela Merkel, is headed for the United States over the weekend and will meet President Biden on Monday. The two leaders will discuss their “shared commitment to both ongoing diplomacy and joint efforts” on Ukraine, White House press secretary Jen Psaki said. Scholz is also set to visit Kyiv and Moscow in mid February.

For the new chancellor, steering his country’s Russia policy has meant trying to helm a three-party coalition, negotiating with pro-Russian voices within his own party and navigating questions over the Nord Stream 2 gas pipeline that would deepen Berlin’s reliance on Moscow for energy.

In a sign of close ties between senior members of Scholz’s left-of-center Social Democrats and the Kremlin, former chancellor Gerhard Schröder was nominated to join the board of Gazprom, a Russian state-owned energy giant, the company announced Friday.

“Germany’s Social Democrats have not ever come to terms with their position on Russia,” Mathieu von Rohr, a prominent German foreign affairs commentator, said on a recent Atlantic Council podcast. “The German position has been weak, indecisive from my point of view, and that has been a problem for the entire Western alliance.”

Germany has been reluctant to export arms to Ukraine, much to the consternation of Kyiv, though Scholz has recently indicated that “all options” — including the controversial Nord Stream 2 pipeline — are on the table for sanctions in the case of a renewed Russian invasion.

Meanwhile, Russia continues to send forces near Ukraine’s border, with the buildup increasing by 6,000 ground troops this week, according to a Ukrainian military assessment shared with the Military Times. But officials in Kyiv have said for weeks that such forces are not likely to be enough for Putin to mount a full-scale invasion of Ukraine.

The Kremlin continues to deny that it has plans to attack Ukraine. The Russian foreign ministry on Friday attacked Western leaders such as British Prime Minister Boris Johnson for issuing warnings of Russian aggression, saying that they “provoke acrid laughter and jokes … in Russia” and are “impossible” to take seriously, Russian news agency Tass reported.