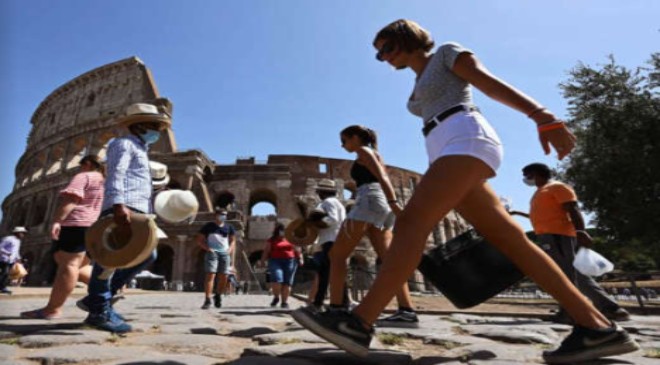 If you’re planning to travel to Italy, here’s what you’ll need to know and expect if you want to visit during the Covid-19 pandemic.

Italy renewed its state of emergency status on December 14, and will remain so until at least March 31. Although the country has emerged from a third-wave lockdown, case numbers are being continuously monitored, and regions are following a traffic light-style system with varying restrictions dependent on hospital capacity and infection rates.

New restrictions on entry have been brought in, including testing requirements for EU arrivals for the first time.

Entry is largely limited to residents of the European Union, plus a select list of non-EU countries, including the United States, Canada, Japan and the United Kingdom. The entry regulations differ depending on a traveler’s vaccination status and whether they’ve recently recovered from Covid.

On November 26, Italy banned arrivals from South Africa and seven other countries in Southern Africa, following the discovery of the Omicron coronavirus variant.

Since December 6, a tightening of rules means it is now difficult for unvaccinated people to carry out day-to-day activities. And from December 23, masks must be worn at all times, including outside.

What’s on offer in Italy

This is one of Europe’s big hitters, known for its historic cities of art such as Florence, one-off wonders such as Venice and the seat of the Roman Catholic Church in Rome.

Italy’s borders have been open to visitors for most of 2021, with some restrictions in place. The entry regulations were updated on December 16, and are valid until at least January 31.

The rest of the world is classified as List E. Only essential travel is allowed from these destinations.

On November 26, following the discovery of the Omicron variant, Italy banned travel from eight southern African countries: South Africa, Lesotho, Botswana, Malawi, Zimbabwe, Mozambique, Namibia and Eswatini until further notice. This travel ban was renewed on December 14, and will run until at least January 31.

What are the restrictions?

As of December 23, anyone flying to or from Italy must wear an FFP2 mask — for more information, see below.

Regardless of their vaccination status, all visitors must fill in a self-declaration form. Additionally, the following requirements must be met, depending on where you are arriving from.

All fully vaccinated (including boosted) arrivals from List C (EU countries) must present a negative test result, taken within 24 hours (antigen) or 48 hours (PCR) of departure, in addition to their vaccination certificate.

Non-vaccinated and partially vaccinated EU arrivals must additionally quarantine for five days on arrival, and then test negative before exiting quarantine.

Non-vaccinated children under 12 do not have to quarantine, as long as they are traveling with fully vaccinated adults.

Travelers from Canada, Japan and the US could show proof of recovery from Covid-19, instead of proof of vaccination.

Those who do not present the correct evidence — or unvaccinated arrivals — must quarantine for five days, and test at the start and end of quarantine.

Wherever they are arriving from, children under six years old do not have to take a test. Furthermore, unvaccinated kids follow the rules their parents are following — in other words, if their accompanying parent does not have to quarantine, neither does the child.

As the first hit European country, Italy has been through a lot. Restrictions have consistently brought things under control, with Italy holding out longer than European neighbors in each subsequent wave. However, the winter waves of 2020-21 and 2021-22 have taken huge tolls.

Italy holds Europe’s second highest death toll (after the UK), passing the milestone of 100,000 deaths on March 8. Nearly 7.8 million people have been infected to date, with the death toll at 139,559 as of January 12. With the arrival of the Omicron variant, numbers are soaring, with each week over the past month breaking the previous record. In the week leading up to January 12, over 1.2 new infections were recorded, beating the previous record of 1.1 million the previous week, and 681,000 between Christmas and New Year. Before Omicron, the record infection rate for the pandemic was 248,000 infections in a week, registered in November 2020. Around 90% of the adult population has now been fully vaccinated, and children are now being vaccinated as well. A vaccine mandate for the over-50s was announced on January 6. All over-18s can now receive a booster dose four months after their second dose.

What can visitors expect

Italian regions are currently graded by their infection and hospitalization rates, running from white (lowest risk) through yellow and amber to red (highest risk). From the end of August to early December, almost all regions were designated white. However, half the country is now yellow.

As of January 7, Calabria, Friuli Venezia Giulia, Lazio, Liguria, Lombardy, Marche, Piedmont, Sicily, Veneto and the autonomous provinces of Bolzano and Trento are yellow. The rest of the country is currently white, with the next update due January 17, when Calabria and Liguria look increasingly likely to turn orange. Several towns within regions are already orange, including Padova in Veneto.

With the fourth wave picking up pace, the outdoor mask mandates put in place in major cities were superseded on December 23 by a nationwide mandate. This means that you must wear a mask at all times, even when walking outside in the street, or risk fines of around $450.

The ruling of December 23 also mandates safer FFP2 masks in certain situations: on public transport, and during any kind of performance whether indoors or outdoors — cinemas, theaters, music venues and sporting events. Eating and drinking inside at these events is also banned. Flights to and from Italy now also require FFP2 masks.

Any kind of event, party or concert that involves crowding in open spaces are now banned, from December 24 to January 31. Nightclubs have also been closed.

Social distancing restrictions remain in place, including on public transport. Only high-speed trains are not subject to social distancing rules, since anyone accessing them must hold a green pass (see below). Currently, green passes are checked onboard but a new decree signed November 15 states that stations with barriers — currently Rome, Milan and Florence — will perform checks before allowing passengers to board. Additionally, the authorities will be given the authority to halt any train on which a passenger is showing any symptoms of Covid-19.

Only two people may sit in the back of a taxi, if they are part of the same family.

Previous restrictions on travel between regions have also been lifted — at least, between white and yellow regions. If traveling to, or coming from, an orange or red region, essential reasons must be proven.

White zones are almost back to normal, qualifying as extremely low risk — where there are under 50 cases per 100,000 inhabitants. These areas are exempt from restrictions, but regions can bring in their own rules. So far, none has done so.

In yellow zones, bars and restaurants can stay open throughout the day, but only for outdoor consumption. Indoor dining restarted June 1. Diners must be home for the 11 p.m. curfew.

In yellow, shops are still open. People can have guests at home — up to four adults, plus an unlimited number of children. Trips to second homes are allowed, and sports have resumed — you can now have up to 1,000 spectators outside, and 500 inside, socially distanced. Museums can reopen but on weekends and holidays tickets must be booked at least one day in advance. There is a maximum of four guests per table in a restaurant.

In orange zones, it is up to local authorities as to whether people can have home visits. Trips to second homes are allowed, though without mixing with others. Restaurants offer takeout only and people can move freely within their own towns, but cannot leave their area unless for work or an emergency.

In red zones (highest risk), all shops are closed other than grocery stores and pharmacies. People may only leave their homes for work, health reasons, to go to a place of worship or to take exercise once a day.

Since August 6, a “certificazione verde,” or green pass, has been needed to enter cultural sites such as museums or galleries, entertainment and sports venues, theme parks, spas, and to eat indoors.

This was extended to included domestic flights, high-speed train travel between regions as well as sea travel on September 1.

On January 6, it was announced that the green pass mandate would be extended to any nonessential shops and services, including hairdressers, post offices and shopping centers.

Any employee in Italy must also hold a green pass.

On December 6, a “super green pass” was introduced. This can only be obtained through vaccination or previous infection, but not through testing negative.

Currently, this super green pass is required to eat indoors and outdoors in bars and restaurants, as well as to access entertainment venues, museums and exhibitions, gyms, nightclubs, theme parks, ski lifts, pools, wellness centers, spas and stadiums. Hotels and public transport also mandate the new pass, as do events such as fairs, festivals and conferences.

From February 1, the validity of a green pass will be reduced from nine months to six.

Those vaccinated in other countries are not eligible for the Italian pass, but those with EU vaccination passports will be fine, as there is a reciprocal agreement.

On July 29, the Italian government announced that vaccination certificates from the following countries would also be accepted in lieu of a green pass: Canada, Israel, Japan, UK and US. Those holding a certificate with a QR code can normally have their passes read as an Italian one. Check whether yours is valid by downloading the VerificaC19 app. Travelers from the UK should note that English and Welsh QR codes can be read, but Scottish and Northern Irish certificates cannot be. You should take a paper copy of your certificate if your QR code is not readable.