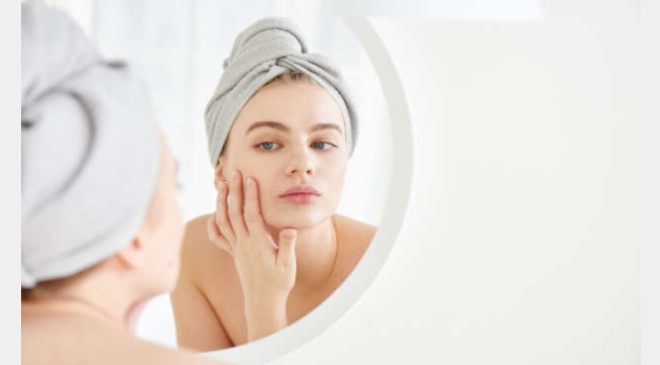 If You Notice This on Your Skin, Get Your Kidneys Checked, Experts Warn

During harsh winters, you may be someone who pays extra attention to keeping their skin healthy and moisturized. But regardless of how intense your skincare routine may be, you may still feel like it’s not getting the job done. In some cases, this could be indicative of a larger issue: Experts say that certain problems with your skin could be due to kidney disease. Since early kidney disease doesn’t come with many symptoms, as noted by the National Kidney Foundation (NFK), it has been dubbed a “silent killer.” But paying attention to your skin may help you detect it before it progresses. To find out which kidney disease symptom to look out for on your skin

Dry and itchy skin is considered an early sign of kidney disease.

Kidney disease affects more than 37 million people in the country, according to the NFK,  but symptoms of it can progress with “little to no warning.”  This can essentially result in even more dire conditions like chronic kidney disease (CKD) or end-stage renal disease (ESRD).Despite the fact that it’s not easy to catch kidney disease in its early stage, there are still signs you can look out for. When kidneys are healthy, one of their main jobs is to “help keep bones strong and work to maintain the right amount of minerals in your blood.” However, when your kidneys can’t manage the number of minerals and nutrients that your body needs, this can result in dry or itchy skin.

Dry and itchy skin is an extremely common symptom of advanced chronic kidney disease (ACKD). As noted by Kidney Care UK, nearly 50 percent of patients with ACKD experience a desire to itch, also known as pruritus.

This itching can most often become more prevalent when kidney function worsens. In a 2010 study published in the Clinical Journal of the American Society of Nephrology, researchers studied 103 U.S. patients who had uraemic pruritus—itching that’s specifically due to CKD—and were on dialysis. In questionaries, participants were asked how often they were bothered by their itching. Some aspects they could go into detail about included, “the persistence/recurrence of [their] itching,” “feeling embarrassed about [their] itching,” and “the appearance of [their] skin from scratching.”

Aside from itching, the Mayo Clinic notes that those with CKD can experience nausea, vomiting, loss of appetite, and fatigue. Contacting your doctor about these signs can also help prevent early kidney disease from developing into kidney failure.

Whether your symptoms are mild or major, pruritus can have a big impact on your quality of life. In a 2019 study published in the American Society of Nephrology, researchers examined 3,780 patients with CKD who answered this question: “During the past two weeks, to what extent were you bothered by your itching skin?” Responses, ranging from “not at all” to “extremely bothered,” were then used to define which patients had mild to extreme pruritus.

Findings not only showed that 24 percent of participants had moderate-to-extreme pruritus, but they detailed that patients with pruritus indicated a poorer quality of mental and physical health than patients without pruritus. Participants with itchy skin also had a greater chance of experiencing restless sleep and depression.

“One of the main goals of managing chronic disease is alleviating symptoms; however, this is only possible when we are aware of the suffering patients endure,” study author Nidhi Sukul, MD, said in a press release. “This research gives us a uniquely international look at how important it is to ask our patients with chronic kidney disease if and how they are affected by pruritus.”

There are many other reasons why you could have dry skin.

Although pruritus could be related to kidney disease, there can be many other reasons for it. According to the Cleveland Clinic, itchy skin can often occur in patients with allergic diseases, such as hay fever, asthma, and eczema. Most commonly, pruritus can simply be due to dry skin, which occurs when your skin isn’t producing enough moisture.

To determine the cause of your itching, be sure to reach out to your doctor. Allergy tests, blood tests, image tests, and skin biopsy are some of the few things that can help diagnose pruritus, per the Cleveland Clinic.