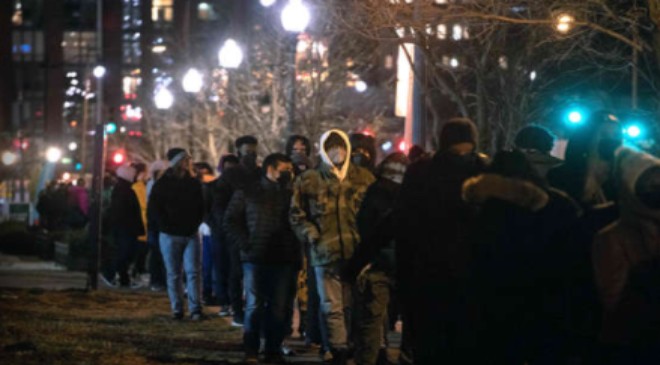 The omicron variant of the coronavirus has swept the United States in a matter of weeks, reshaping a pandemic now heading toward its third year and leading some experts to expect record-high cases and hospitalizations.

Scientists are racing to learn more about this new variant, which appears more resistant to vaccines and is even faster-spreading than the delta variant that sent infections spiking earlier this year. Public health officials say that getting a booster shot is the No. 1 thing the vaccinated can do to protect against severe illness and, to a lesser extent, infections.

But how should omicron factor into your plans after vaccination? Infectious-disease experts give a range of answers.What to know about the omicron variant of the coronavirus

Some think it’s best to skip the New Year’s Eve party, as the country weathers a new wave of disease. Others underscore that Americans must “live with the virus” — especially as vaccines seems to protect well against the worst illness but are less effective at stopping milder cases of omicron.

“The hiding-in-our-basement-behind-the-pile-of-sandbags moment has come and gone,” said Andrew Noymer, associate professor of population health and disease prevention at the University of California at Irvine. “If the rationale is that there’s covid outside the door, well we’re going to be hiding in our basement forever because there’s going to be covid next year, and the year after that.”

“For so many of us — I don’t necessarily think we need to cancel plans,” echoed Darlene Bhavnani, an assistant professor in the department of population health at University of Texas at Austin’s Dell Medical School. “We can do this safely if we take advantage of the tools we have.”

Different people, they all acknowledge, will balance the risks and rewards of each activity differently.

Why is omicron different?

Omicron was detected in November and quickly sparked concerns among scientists. It had a lot of mutations, some of which suggested it would evade the protective antibodies that vaccines generate. It also seemed poised to outcompete delta, the variant that previously dominated around the world.

California was the first to report a U.S. case of omicron, on Dec. 1. By the second full week of December, omicron accounted for 73 percent of new U.S. coronavirus cases, according to modeling from the Centers for Disease Control and Prevention.

How well do vaccines and boosters protect from omicron?

People who have been vaccinated and boosted with mRNA vaccines from Pfizer or Moderna will probably be well-protected from serious illness and death, researchers said. Even in the face of omicron.

A study from South Africa found that the two-dose Pfizer-BioNTech vaccine provided 33 percent protection against infection, far less than for other variants. Protection against illness requiring hospitalization dropped from more than 90 percent against delta to 70 percent, which the researchers said was still “very good.”

How boosters change the picture is not totally clear, scientists said, but the evidence so far is encouraging. Data from the United Kingdom showed that a Pfizer-BioNTech booster shot restored protection against symptomatic illness to about 75 percent. Researchers expect boosters to amp up protection against hospitalization, too.

The outlook is fuzzier for the minority of Americans who initially got vaccinated with the one-dose Johnson and Johnson shot. The CDC recently recommended mRNA shots over the J&J vaccine, citing a very rare but potentially fatal blood clot issue. J&J’s shot seems much less potent against omicron infections, researchers have said, but it may still ward off severe disease.

People who got J&J and then got boosted should retain significant protection against serious covid-19, said Arthur Reingold, division head of epidemiology at the University of California at Berkeley. But experts all cautioned the data on omicron and various vaccines are still emerging.

The hope, Reingold said, is that mRNA vaccines remain “pretty potent in terms of preventing infection. But whether that’s 50 percent or 70 percent or 80 percent, I think we just don’t know yet.”

Everyone has to “fathom that none of us is going to live the next 30 years without getting a form of covid some time,” said Noymer. When that happens, experts said, you’ll want to be well-vaccinated.

I’m vaccinated and boosted. Should I still go out to a party? A concert? A restaurant?

The vaccinated and boosted should be balancing risk and reward, Noymer said. Ask yourself: Does the enjoyment you’ll get out of a concert, for example, make the chance of infection worth it?

Noymer said at this point, he feels comfortable continuing to eat at restaurants. “I would probably be willing to return to only eating at home if the situation calls for it. Before the winter is over, there may be a 4-6 week period I eschew dining out,” he said, but he’s not there yet.

Neha Nanda from the Keck School of Medicine at the University of Southern California suggested tweaking plans for a New Year’s party to make them more covid-safe, rather than canceling — maybe by checking that people have gotten boosters or asking people to get rapid-tested just before the event.

“Emotional well-being is extremely important,” she said. “At the end of the day, people have to see each other.”

Others are being more cautious, at least for a while. A. Marm Kilpatrick, a professor at the University of California at Santa Cruz, pointed to science writer Ed Yong’s recent article in the Atlantic: “I Canceled My Birthday Party Because of Omicron.”

Everyone would have been vaccinated and most would be boosted, Yong wrote. His sense of personal risk had not changed much with omicron. But if the virus spread at his party, it could derail people’s plans to spend Christmas with their families — forcing them into quarantine or exposing loved ones who may be higher-risk for severe illness.

Kilpatrick acknowledges that staying home is a luxury out of reach to many. Still, he wants to keep his own contribution to the transmission as low as possible. He also worries about long covid and wants to see more data on it before letting his guard down.Long covid is destroying careers, leaving economic distress in its wake

He stopped going to indoor dinner parties with friends. He opted not to carpool. He turned down an invite to go see the new Spider-Man film in theaters. “I’m basically just avoiding indoor spaces, you know, with non-household members,” said Kilpatrick

Carlos del Rio, a professor at the Emory University School of Medicine, advises people especially vulnerable to the virus — such as the elderly and immunocompromised — to avoid gatherings, even if they are vaccinated and boosted. “I wouldn’t play Russian roulette … omicron’s a different beast. Different ballgame.”

“We are in a critical situation that you really don’t want to become a patient in a hospital right now and that you need to do whatever it takes to prevent you from getting infected,” he said.

Having an extra-vulnerable person in your household also changes your risk calculus for going out.

For those seeing high-risk family members over the holidays, experts recommended testing beforehand; avoiding activities that could expose you to the coronavirus in the week or two leading up to the visit, if you can; and making sure you travel as safely as possible, wearing a well-fitting mask.

Self-testing before an indoor get-together is “especially important before gathering with unvaccinated children, older individuals, those who are immunocompromised, or individuals at risk of severe disease,” the CDC says.

I’m going out. What precautions can I take?

Testing and masking can help you minimize your virus exposure.

Experts urged against cloth masks, recommending surgical masks or — even better — KN95s. But they said the most important thing is finding a mask that fits your face closely, so that less air escapes out the side. You can also double-mask to boost your protection.

Noymer suggested another risk-reward calculation for mask-wearing: There’s no bonus for going unmasked in the mall, he said, but a very good reason to take them off when you’re dining at a restaurant.

Especially in a season of gathering, testing is a critical tool that we “haven’t really had a lot of access to in previous holiday seasons,” said Bhavnani from the University of Texas. If you plan to test ahead of a gathering or event, she suggested doing so “as close to the event as possible.”

“I had a group of people here in my house yesterday, a small group of people, but everybody got tested in their car before they came to the house,” del Rio said.

Rapid tests that return results in 15 minutes are available in drugstores but many be hard to come by as demand spikes. Unlike slower, publicly-provided PCR testing, they typically cost $20 to $35 per two-pack and are not accessible to everyone — though the Biden administration plans to make more free.

Bhavnani recommended testing early and immediately if you are feeling any symptoms, even if you think they may be allergy or flu symptoms. Experts also advise testing five days after close contact with someone who has the virus.

What if I’m a parent of young children who cannot be vaccinated yet?

Children under 5 are not yet eligible to be vaccinated. As of mid-December, children 4 or younger accounted for a small fraction of U.S. covid-19 deaths — 236 out of nearly 800,000, or roughly 0.03 of 1 percent, according to the CDC. The virus has proven far more severe for adults, and risks increases with age.

Despite that, experts acknowledged the real fears that parents have about exposing young children. Covid-19 can be serious at any age.

Noting her unvaccinated children, doctor Leana S. Wen wrote in The Post: “My family will still take additional precautions; we won’t dine inside restaurants or bring the kids to unmasked holiday events.” But everyone’s situation is different, she said.

Bhavnani encouraged gathering outdoors when possible and recommended testing children as a way to curb spread.

What if I’ve already gotten covid-19?

Reinfections seem to be more common with the omicron, according to researchers in South Africa and the United Kingdom, though scientists are still learning more.

A small study published this month — which did not look at omicron — suggested that breakthrough infections in vaccinated people may generate “super immunity,” as senior author Fikadu Tafesse of Oregon Health & Science University put it.

Despite the lack of omicron-specific data, Tafesse said, “based on the results of this study we would anticipate that breakthrough infections from the omicron variant will generate a similarly strong immune response among vaccinated people.”

Tests generally do not tell you what variant infected you.