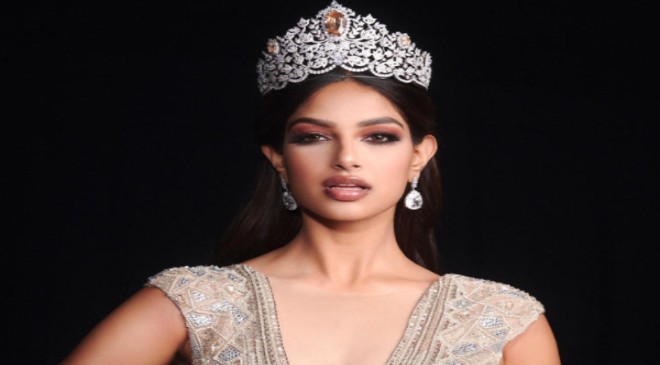 The new Miss Universe Harnaaz Sandhu has dreamed of taking the crown for years, and she told Insider that its critics “need to understand that beauty pageants are not about beauty.”

“It’s about personality,” she continued. “It’s about having courage to bring differences in society, and having the courage to represent yourself and know you’re strong enough to go with your opinions in front of the whole universe.”

Sandhu, 21, first got social media talking on Sunday when host

Many viewers on Twitter slammed Harvey’s request, asking why Sandhu hadn’t been given a chance to share more about herself when other Miss Universe contestants got to speak about their careers or philanthropies. But Sandhu told Insider that she didn’t agree with the criticism.

“We are here to celebrate ourselves,” she said. “It’s not about being the perfect beauty pageant girl. It’s about being yourself on the stage, and I think it takes huge courage to do something like that.”

“Honestly, my heart breaks to see how nature is going through a lot of problems, and it’s all due to our irresponsible behavior,” she said during the question round. “This is the time to take actions and talk less, because each action could either kill or save nature. Prevent and protect is better than repent and repair, and this is what I’m trying to convince you guys today.”

Sandhu began competing in pageants when she was 17, and only had 30 days to prepare for Miss Universe.

“We waited for 21 years to bring the crown back and my heart is filled with pride,” she said. “This is the purpose of my life. I want to make my country proud and I want to represent my country.”

Sandhu told Insider that she now plans to focus on the pageant’s motto of uniting women all around the world, as well as propel her own platform to break the stigma and silence around women’s health and menstrual hygiene.

“Women in my community still feel uncomfortable talking about their health because they’re taught that their health is not a priority,” Sandhu said. “I think everyone deserves to be treated equally. Now it’s my time to bring differences in society and break the stigma.”

“Every single day I’m going to do my best to inspire people,” she added. “Given the chance, women can conquer anything in this world because they have the power to paint the future. And they are the masters of their own life.” Read the original article on Insider