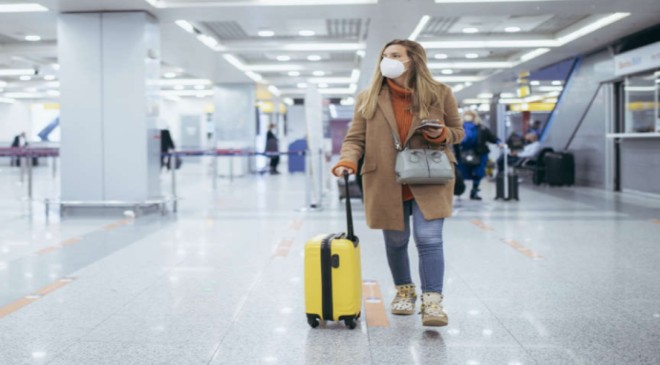 Never Do This When Your Flight Is Delayed, Experts Warn

No matter how many times you’ve double- and triple-checked to make sure you have everything in order for your upcoming flight, flight delays are out of your hands. Your plane could be held up for a number of reasons, from bad weather to a staffing shortage. And some carriers are simply more prone to delays than others. But no matter what airline you’re flying with, there is one thing you should never do when your flight has been delayed. Read on to find out what common mistake to avoid the next time you’re traveling

Don’t arrive later than your flight’s original time, even if the plane is delayed.

A flight delay might prompt you to drag your feet in terms of getting to the airport, but travel experts strongly advise against this. Maria LaDuca, the owner of luxury travel firm The Agency Chic, says that when flying, you should “always arrive at the gate before your scheduled departure time, regardless if there is a delay.” According to LaDuca, many airlines include this same guidance on their websites.

“If your flight is delayed, please arrive at the airport to check-in based on your originally scheduled departure time,” American Airlines states on its website. “Check-in will continue to close at the usual time. If you arrive after check-in has closed you will not be able to fly.”

The reason you want to arrive to the airport before your flight’s original time is because “flight delays are usually not reliable estimates,” says Becky Moore, a travel expert and founder of travel resource GlobalGrasshopper. Flights can be delayed for various reasons, and how quickly these issues are resolved can vary quite a bit.

According to LaDuca, airlines delays can occur for many reasons, including bad weather and mechanical problems, along with physical plane and staff delays from another airport. Airlines will give an estimated time based on how long they believe these issues will take to fix, but these problems can always be sorted out earlier than expected.

“You never know when the delay could be shortened,” Eva Lerma, a travel counselor and co-founder of MyTravelTripod, warns, adding that airlines reserve the right to move up or cancel delays if the situation has changed.

You should be arriving hours earlier than your scheduled departure time.

“Arrive as early as you can,” Moore advises. “According to the Transportation Security Administration’s (TSA) website, passengers are not allowed to board the aircraft more than 30 minutes after the aircraft’s scheduled departure time.”

You might want to allow yourself even more time at the airport during the holidays.

If you’re traveling for the holidays this year, experts say following this timeline for airport arrival is “critical” right now, and you may want to consider allotting yourself even more than two or three hours. A combination of high demand for travel, airline staffing shortages, and long security lines can lengthen the amount of time between when you arrive at the airport and when you get to your gate.

“Passengers should not cut it close or they could definitely miss their flight. We want to avoid any backlog at the TSA passenger screening checkpoint,” Thomas R. Stoudt, executive director of the Lehigh-Northampton Airport Authority in Pennsylvania’s Lehigh Valley, told The Morning Call.

A pilot shortage might already be occurring, as Delta Air Lines recently had to cut flights due to a lack of available pilots. And holiday travel demand has been well documented, with two million people traveling through airports over Thanksgiving weekend this year, according to the TSA. Christmas is expected to turn out a similar crowd.

“People aren’t going to forgo being home for the holidays for a second year in a row,” Narendra Khatri, principal of Insubuy, a travel insurance company, told The Washington Post. “Expect airports and flights to be more packed than ever around Thanksgiving and Christmas. This means more flight delays, cancellations, and long layovers.”