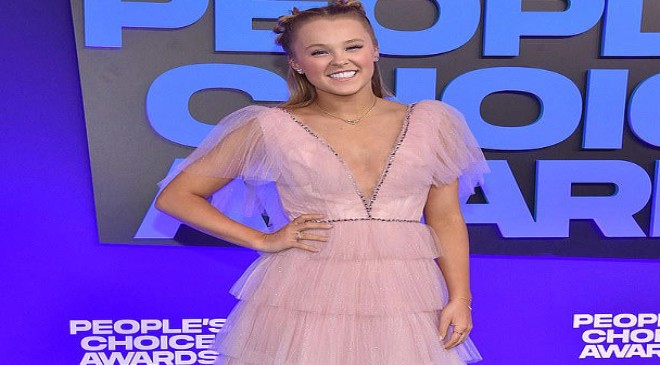 Jojo Siwa wore a very classy ensemble as she walked the red carpet at the 2021 People’s Choice Awards.

The Dance Moms star, 18, wore a gorgeous pink gown with a deep V that ended in the middle of her chest.

Her clothing and makeup were more toned down than her usual out-there rainbow attire and sparkling makeup.

Siwa’s hair was tied up in its trademark braids, and she stood tall on her skin-colored stilettos.

She accessorized with a pair of small stud earrings and a thin silver necklace.

The J Team star was spotted taking pictures with former NBA star Iman Shumpert, who just defeated her in Dancing With The Stars.

The 2021 People’s Choice Awards are kicking off tonight at the Barker Hangar in Santa Monica, California.

It’s famous for being the only awards show of the season that is entirely voted for by the fans.

Honoring the biggest celebrities of the year across 40 different categories, the annual bash managed to always pull in an A-List crowd.

‘I can’t believe I get to host the PCAs! I’m beyond blessed to be nominated twice and part of two more nominations for SNL,’ he said.

‘Good times indeed. Congrats to all the nominees – we already won!’

Kenan also told E! this month this he is most excited to see Halle Berry accept the People’s Icon Award at the star-studded bash.

‘I think it’s going to be Halle Berry’s night. It’s such an iconic award that she’s winning, and it’s being presented by Cardi B, so that’s a lot of high energy already.’

Meanwhile, not only is Kim Kardashian West a PCA nominee, she’s already a winner.

It was announced earlier this month that the SKIMS mogul will receive the Fashion Icon Award at the event.

‘For nearly two decades, Kim Kardashian West’s style evolution has disrupted and influenced trends on a global level and cemented herself as a force to be reckoned with within the fashion industry,” said Jen Neal, Executive Vice President at E! News.

‘For being a cultural inspiration, trailblazer and so much more, we can’t wait to honor Kim with this year’s People’s Fashion Icon Award.’