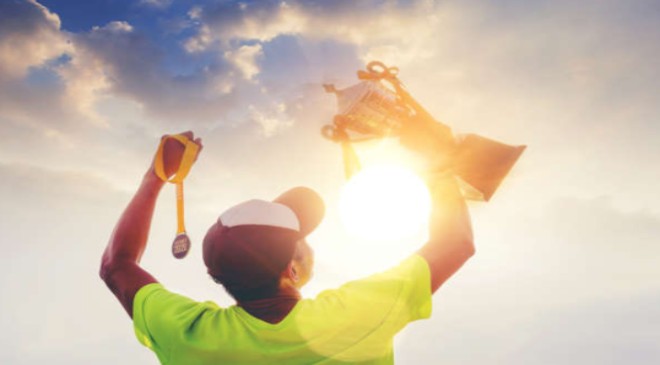 This Zodiac Sign Is the Most Competitive, According to Data

Whether you’re playing football with your friends or participating in an intense trivia night, you might be someone who’s always in it to win it. There are also times where a little competition can be good for you. Some people thrive on competition, which helps them perform better both in the workplace and in their personal lives. But while everyone behaves differently in a contest, some competitors are much more ruthless than others. Research conducted by RunRepeat—a review and ranking site that helps athletes find the best shoes—shows that one zodiac sign is very focused on winning and has a higher chance of taking home that big prize, astrologically speaking.

At the end of the day, astrology isn’t science, so you may not put much stock into this ranking—but here’s how the data was compiled: In the 2021 study, RunRepeat looked at the birthdays of 16,027 medalists from 28 Summer Olympic games and 23 Winter Olympic games, all of which took place between 1896 and 2018. Results from team events and competitions were not included. The company’s data details how many athletes of each zodiac sign were examined, and the total number of medals these athletes won. Wondering how competitive your zodiac sign is? Read on to find out.

Coming in as the least competitive of all zodiac signs, 510 Leo athletes in the study have a total of 681 medals combined. But while they may not be major winners, Leos don’t seem to let this bring them down, as they’re confident, protective, and welcoming, per Cosmopolitan.

Out of 531 athletes, Scorpios have 696 medals. This water sign is still a force to be reckoned with, however, despite how uncompetitive they are. Allure notes that Scorpios not only “lie in wait and strike when least expected,” but they are very intuitive and passionate. They will also work long and hard to achieve their goals, refusing to let anything get in their way.

The 518 Taureans in this study received a total of 713 Olympic medals. Because of the laid-back lives they live, per Cosmopolitan, it’s no surprise that these athletes don’t have the biggest competitive side. In fact, if this earth sign lost any game, it probably wouldn’t faze them.

“They are soothing, stoic, chilled, and happy in their own skin,” Cosmopolitan says. “There is no drama or tension in their default state of mind or mood.”

Only slightly more competitive than Taureans, Libras have won 724 medals, out of 529 athletes. While they aren’t big on competition, they are big on learning new things. According to Allure, this air sign has great taste and is very intellectual. They’re also very focused on finding the fairest solution to any problem, so they won’t let any aggression or competition get to them in the process.

Among Cancers, 576 athletes won 741 medals at the Olympics. This water sign likes to appreciate all the good things that they have in their lives, per InStyle. Clearly, Cancers don’t make for sore losers. However, that doesn’t mean that they don’t have a sensitive side.

“Whether they’re worked up or drowning in their feelings, often as a result of feeling that their giving nature has been taken advantage of, they’ll be quick to retreat into their shell,” InStyle notes.

The 551 Geminis in the study are only a bit more competitive than Cancers, as they have a total of 744 medals. Geminis like to keep busy, per Allure, with many different passions and hobbies. They are big on trying new things, so it’s very unlikely that they’ll be frightened by any type of competition.

With 551 athletes netting 780 medals, Virgos fall somewhere in the middle when it comes to their competitiveness. This earth sign is anything but average, however. As noted by InStyle, they have killer organizational skills and always pay attention to details, which are highly valuable skills in any situation.

“They are the brainy A students of the zodiac, quick to share what they know to steer the ship in the right direction,” InStyle says.

RunRepeat found that 597 Aries won 797 medals. Along with their bravery and strength, Aries know how to get everyone’s attention, according to Cosmopolitan. This fire sign also has a very passionate nature, which is ultimately what makes them so competitive.

“Steer away from the mini-golf, Monopoly, playing cards or even that harmless little pub quiz machine because whatever is presented as a challenge to an Aries immediately becomes a battle to the DEATH,” Cosmopolitan warns.

Coming in at fourth place on this list, 576 Pieces have 806 medals. Pisces let their emotions run wild, as they’re known for being compassionate, empathic, romantic, and sensitive, as noted by InStyle. This isn’t necessarily a bad thing, though, since emotions are what makes Pisces “excel at a wide variety of forms of creative self-expression.” There’s a good chance they’ll be coming in at first place if you go head-to-head.

Out of 609 athletes, Sagittarians have won 824 medals. This zodiac sign is big on honesty, as noted by Cosmopolitan, with no intention of holding anything back when speaking their minds. They’re spontaneous, funny, smart, and ready to be successful.

“Physically adept, competitive, and outdoorsy, most Saggies are built to play sports,” Cosmopolitan says. “They thrive on the challenge of winning (that Fire sign streak), and they enjoy the team-building (their open and friendly personality makes them a hit with most other players).”

With the second-highest number of wins, 642 Aquarians have 829 medals. Aquarians are innovative and “revolutionary thinkers,” per Allure. They thrive to make the world a better place and won’t let anything stop them in the process, including a little bit of competition.

“These air signs despise authority and anything that represents conventionality,” Allure says. “Free-spirited and eccentric, they can often be identified by their offbeat fashion sensibilities, unusual hobbies, and nonconformist attitude.”

RunRepeat discovered that Capricorns are the ones to beat, as 854 athletes have won 1,202 medals. Results also showed that the combined average of medals for all other zodiac signs is 757, and Capricorns earned 58.6 percent more medals than that. They are extremely career-driven, per InStyle, and pour their hearts and souls into their work. It’s obvious they’re the ones to watch, as they have every intention of bringing home the gold.

“They also see the world through a pragmatic lens that lends itself to getting and staying organized, and are constantly striving to be on their A-game and be respected by colleagues and friends alike,” InStyle says.