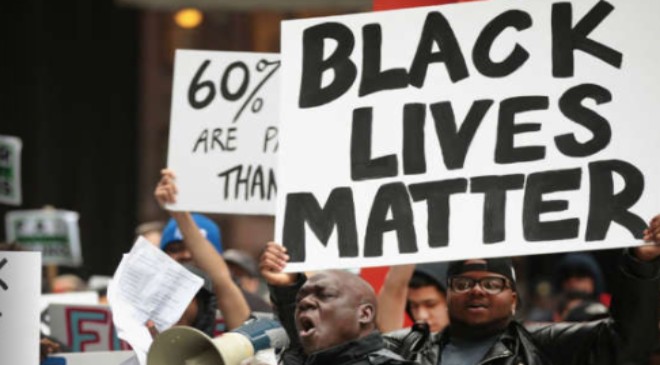 Americans are evenly divided when it comes to support for Black Lives Matter, according to a new poll.

The survey, conducted by Civiqs, a nonpartisan online survey organization that is associated with the progressive media group Daily Kos, found that on Monday 44 percent of Americans said they support the Black Lives Matter movement, and another 44 percent said they oppose the campaign.

Eleven percent of respondents said they do not support or oppose the drive, and one percent said they remain unsure.

The Black Lives Movement was formed in 2013 in response to the acquittal of George Zimmerman, who was charged with murdering Trayvon Martin. Zimmerman, a neighborhood watch captain in Sanford, Florida, shot the 17-year-old Black high school student, claiming that he did so as a form of self-defense.

Civiqs has been tracking support for the Black Lives Matter movement since April 2017, which has shifted over the past four and a half years.

Support reached an all-time high between May and June of 2020, the same time the country was reacting to the death of George Floyd, who was killed after former Minneapolis police officer Derek Chauvin knelt on his neck for roughly nine minutes.

Chauvin was later found guilty on all three criminal counts he was facing in the case.

Backing for the movement spiked to a record-high of 52 percent on June 1, 2020, according to the poll, after teetering around 41 percent for months.

The movement saw its lowest support between July and August of 2018, which was around the same time of the Charlottesville rally.

Support has been on a steady decline since. Civiqs did not perceive a significant spike in support following the police-involved shooting of 29-year-old Black man Jacob Blake, which sparked protests in Kenosha, Wis., or after Chauvin’s conviction was handed down by a jury.

Broken down by race, Black or African American individuals showed the strongest support for the movement on Monday, with 82 percent backing it and seven percent in opposition.

For comparison, only 35 percent of white individuals said they support the movement with 53 percent saying they oppose it.

Fifty-seven percent of Hispanic/Latino respondents said they support the movement, while 29 percent say they oppose it.

When it comes to political parties, Democrats overwhelmingly said they support the Black Lives Matter movement compared to Republicans and Independents.

Monday’s poll found that 85 percent of Democrats support the campaign, followed by Independents at 36 percent and Republicans at just three percent.