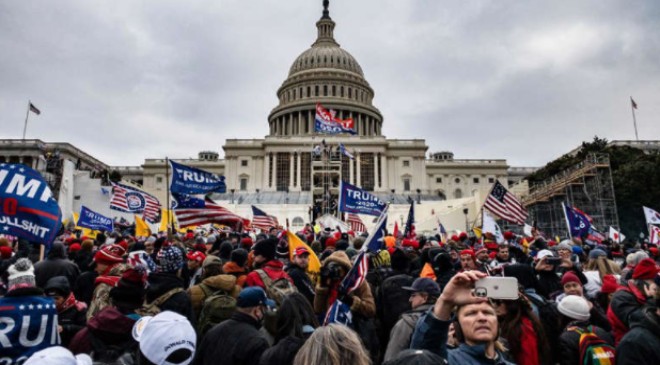 Donald Trump is acting like an ex-President with a constitutional crime to hide as the cover-up of his assault on democracy gathers pace alongside his political comeback.

The twice-impeached 45th President’s continuing influence on politics, popular culture and national life is broadening on multiple fronts and appears undimmed by his ban from social media platforms. His behavior is mirroring the conduct he showed in office: a driving desire to avoid accountability, a challenge to the US system of checks and balances, a willingness to exploit racial and cultural divides, and an eye for a political opening that could boost his own profile, like an apparent tele-rally on the eve of Virginia’s gubernatorial election. The high-stakes election in a state Trump lost by 10 points last year will be closely watched as an indicator of the political environment heading into the 2022 midterms.

A just-revealed list of documents that Trump wishes to prevent the House select committee probing January 6 from seeing — and over which President Joe Biden has refused to assert executive privilege — in itself offers a darkly suggestive picture of Trump’s activities leading up to the mob attack by his supporters on the US Capitol.

If the committee gets its hands on call logs, memos from senior White House staff and entries from the then-President’s schedule, it will be able to create a much fuller picture than is already known about how far Trump directed events, the depth of his effort to steal the election from Biden and how little he did to stop the January 6 riot once it started.

“In 2021, for the first time since the Civil War, the Nation did not experience a peaceful transfer of power,” the House Committee wrote. “The Select Committee has reasonably concluded that it needs the documents of the then-President who helped foment the breakdown in the rule of law. … It is difficult to imagine a more critical subject for Congressional investigation.”

While Trump perpetually tries to evade the consequences of his actions, his latest campaign of obstruction is closely linked with his increasing political activity heading into the midterm elections and a possible 2024 presidential campaign. If the committee were to produce a damning report of Trump’s conduct, it would form a powerful public record of an attempt by an ex-President to destroy America’s democratic heritage as he apparently seeks the office again. There is every reason to believe that in a new White House term, and feeling validated, Trump would pose an even greater threat to democratic governance.

Hiding the truth of January 6

The lengths to which Trump is prepared to go to prevent Americans from learning the full truth about the Capitol insurrection came to light in late night court filings on Friday and early Saturday. The National Archives for the first time revealed details in a sworn declaration about the trove of documents Trump wants kept secret.

Among the 700 pages of documents are handwritten memos from then White House chief of staff Mark Meadows, logs of calls by the then-President and then-Vice President Mike Pence and White House visitor records.

In the Meadows documents alone, there are three handwritten notes about the events of January 6 and two pages listing briefings and telephone calls about the Electoral College certification, the archivist said.

The papers could also shed new light on the role of conservative lawyer John Eastman, who drafted a six-step plan for how Pence could have certified the election in favor of Trump, rather than the rightful winner on January 6.

Eastman proposed Pence throwing out the votes of enough states that Biden won so that the presidential election would be decided by the House, where each state gets a single vote and Republicans controlled more state delegations.

Eastman said on former White House official Steve Bannon’s radio show in January that Pence could pull it off if he had the “courage and the spine” to do so, according to comments unearthed by CNN’s KFile. CNN reported last week that the January 6 committee would subpoena Eastman if he did not cooperate.

The conservative lawyer’s blueprint, which has been derided by many scholars but appears to have been taken seriously by Trump, has prompted some members of the January 6 committee to draft new legislation to head off such schemes in the future. The proposal could offer more specific instructions for when Congress can overturn a state’s slate of electors, and more clearly define the role the vice president plays in counting the votes, CNN’s Jeremy Herb and Pamela Brown reported. Drafting a law would also provide the committee with a “legislative purpose,” that could potentially strengthen its case — both against Trump’s sweeping executive privilege assertions and against Bannon, who has already been cited for criminal contempt of Congress for ignoring a subpoena and could be prosecuted by the Justice Department.

‘It’s just me and Liz Cheney’

The concept of executive privilege is meant to provide presidents a guarantee that they can receive confidential advice on matters of state from senior officials. However, Trump appears to be using the doctrine to cover-up details of his own role in trying to stage a coup, so the claim that he is seeking to protect the office of the presidency itself rings rather hollow. But even if the House select committee does draft legislation, its prospects are uncertain. It could potentially pass the Democratic-led House, but its chances of surviving a likely GOP filibuster in the Senate — where only seven Republican senators voted to convict Trump in his second impeachment trial over January 6 — appear slim.

Such GOP appeasement of Trump’s autocratic instincts was cited on Sunday by Illinois Rep. Adam Kinzinger — a rare Republican critic of Trump and one of just two Republicans on the January 6 committee — as one of the reasons why he decided not to run for reelection.

“You ultimately come to the realization that basically it’s me, Liz Cheney, and a few others that are telling the truth, and they’re about 190 people in the Republican Party that aren’t going to say a word,” Kinzinger said on ABC’s “This Week.”

“And there’s a leader of the Republican caucus that is embracing Donald Trump with all he can,” Kinzinger said, referring to House Minority Leader Kevin McCarthy, who has anchored his party’s hopes of winning back the House next year and becoming speaker, on Trump.

The latest developments in the January 6 investigation were not the weekend’s only indicators of Trump’s hold over his party and the influence his tumultuous time in the Oval Office still holds over the country.

He is apparently planning to vault himself on Monday into the Virginia governor’s race with a tele-rally on behalf of Republican candidate Glenn Youngkin, who has run a well-pitched campaign that all but ignores the ex-President while sending coded cultural and racial messages to his supporters. Youngkin hopes to make gains in the critical suburban areas around Washington, DC, where Trump is held in disdain. Trump’s maneuver appears to be a naked attempt to claim credit if Youngkin wins a neck-and-neck race in a state where Biden trounced the ex-President. But it might just give Democratic candidate Terry McAuliffe — who has had limited success with painting his rival as a Trump clone — an election eve boost.

“Trump wants to win here so he can announce for president for 2024. That’s the stakes of this election,” McAuliffe told supporters on Sunday. If McAuliffe — who served a previous term as governor — squeezes out a victory Tuesday, it might suggest that Trump remains a drag on swing state GOP candidates, even out of office. But Trump is likely to use a victory for Youngkin to bolster his false claims that vote counts in last year’s elections were tampered with and that he really won in states he easily lost.

In a new sign that his return to front-line politics is accelerating, Trump showed up in Atlanta on Saturday night for Game 4 of the World Series and, with the former first lady by his side, relished taking part in the controversial “Tomahawk chop” — a chant and gesture that is a longtime tradition at Braves games but has also been criticized as racist and offensive to Native Americans. Trump’s visit, alongside his personally recruited Georgia senate candidate Herschel Walker, underscored his willingness to embrace politically incorrect causes to send cultural signals to his base — a technique that is at the center of his political appeal.

His visit to the state also brought a reminder of some of his most notorious efforts to steal the 2020 election, including his January 2 call to Georgia Secretary of State Brad Raffensperger, a Republican, who disclosed on Sunday that he felt threatened by Trump’s pressure to find votes that would overturn his narrow loss in the state to Biden.

“And so you run down every single rabbit trail, none of it ever was supported by the facts. And so I was never concerned from the standpoint of that, but I heard the threat that he was making,” Raffensperger said on NBC’s “Meet the Press” Sunday.

The ex-President’s influence also hung over the G20 summit in Europe as foreign nations wonder how long Biden’s “America is Back” mantra will last if Trump runs for president in 2024. The current President on Sunday warned the world is “continuing to suffer from the very bad decisions President Trump made to pull out of” the Iran nuclear deal. Biden has struggled to get the Islamic Republic back to the negotiating table and the US now appears on the edge of another serious escalation with Tehran.