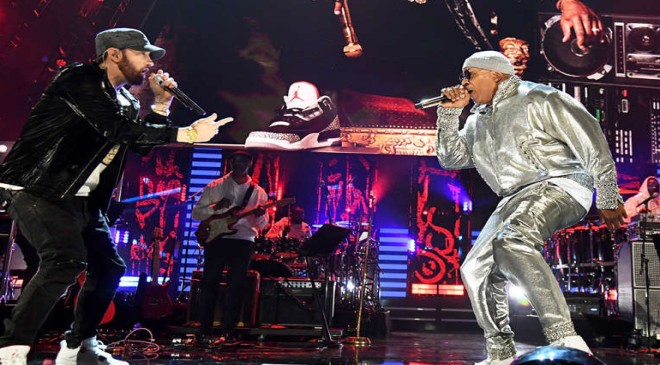 The sixth time’s the charm for LL Cool J. On Saturday, the rapper and actor was formally inducted into the 2021 Rock & Roll Hall of Fame — and celebrated by bringing along some special (and famous) friends.

Performing at Cleveland’s Rocket Mortgage FieldHouse arena, LL Cool J sang a medley featuring some of his well-known songs where he was joined by Jennifer Lopez and Eminem. Eminem took the stage with his friend for a rap battle-inspired performance of LL Cool J’s song “Rock the Bells” while Lopez made an appearance to duet on her No. 1 single “All I Have.”

“LOVE IS LIFE AND LIFE IS LIVING!!!” Lopez tweeted along with the photo. “I was honored to be a part of something very special for my friend @llcoolj tonight.”

The NCIS: Los Angeles actor posted his own celebratory photo on Instagram, sharing a side-by-side of “how it started” and “how it’s going” with a photo from early in his career alongside him posing at the induction ceremony.

“Day 1,” he captioned the photo, posted a few hours after the performance.

During the ceremony, the singer also received The Musical Excellence Award from Dr. Dre. In an interview with Rolling Stone following the announcement of his nomination, he expressed gratitude for being recognized for his musical achievements.

A filmed version of the special is set to air on Nov. 20 and will be available to stream watch on HBO and HBO Max.