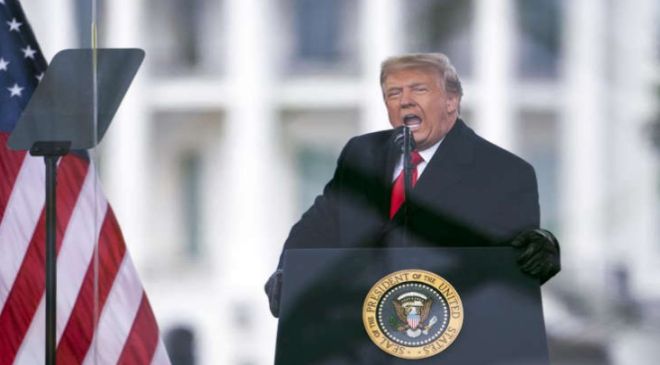 While the Capitol was under attack on Jan. 6, former President Donald Trump remained out of sight from the public and watched TV in the White House private dining room, ABC News’ chief Washington correspondent Jonathan Karl revealed on ABC’s “This Week.”

House Minority Leader Kevin McCarthy, R-Calif., called Trump to ask him to tell the rioters to leave the Capitol, Karl reports in his new book, “Betrayal: The Final Act of the Trump Show.”

McCarthy allegedly told Trump, “I just got evacuated from the Capitol! There were shots fired right off the House floor. You need to make this stop.”MORE: Jan. 6 committee to ‘swiftly consider’ criminal contempt for Steve Bannon, others who ignore subpoenas

A source familiar with the call between McCarthy and Trump said the former president pushed back, saying, “They are just more upset than you because they believe it more than you, Kevin,” referring to the lie that the election had been stolen.

The former president liked what he saw, boasted about the size of the crowd and argued with aides who wanted him to tell his supporters to stop rioting, according to Karl’s sources.

Two hours after the riot started, Trump finally acquiesced to recording a video statement. In the message posted to Twitter, he asked his supporters to go home but also praised them. “We love you. You are special,” Trump said in the video.

An aide present for the recording said, “Trump had to tape the message several times before they thought he got it right.”

In earlier versions he neglected to tell his supporters to leave the Capitol, according to Karl.

Last week, a Senate report documented alarming new details about the way Trump attempted to use the Justice Department to overturn the presidential election. Attorney General Bill Barr refused to go along, infuriating Trump when he said in early December there was no widespread fraud.

After Barr left office in mid-December, the report said Trump pressured Acting Attorney General Jeffrey Rosen to help steal the election but he too refused.

Rosen told senators he informed Trump that the Justice Department “can’t and won’t just flip a switch and change the election.”

In response, Trump asked that the DOJ “just say the election was corrupt and leave the rest to me and the [Republican] congressmen.”

In late December, Trump turned to Jeffrey Clark, a lawyer with no experience in election law, but who promised to declare without evidence that there was widespread voter fraud and to pressure contested states to reverse President Biden’s victory.

Clark also brought a new conspiracy theory to the cocktail of falsehoods. Two sources familiar with Clark’s actions said Trump “believed that wireless thermostats made in China for Google by a company called Nest Labs might have been used to manipulate voting machines in Georgia. The idea was nuts, but it intrigued Trump, who asked Director of National Intelligence John Ratcliffe to look into it.”

At a dramatic, three-hour Oval Office meeting on Jan. 3, Trump said he wanted to make Clark acting attorney general, according to Karl.

“One thing we know is you, Rosen, aren’t going to do anything to overturn the election, Trump said, according to Rosen’s congressional testimony.

Trump was then told every senior DOJ official would resign if he went through with his plan, as well as White House counsel Pat Cipollone, who said Trump’s plan amounted to “murder-suicide pact,” according to Karl.

“Betrayal: The Final Act of the Trump Show” will become available Nov. 16.