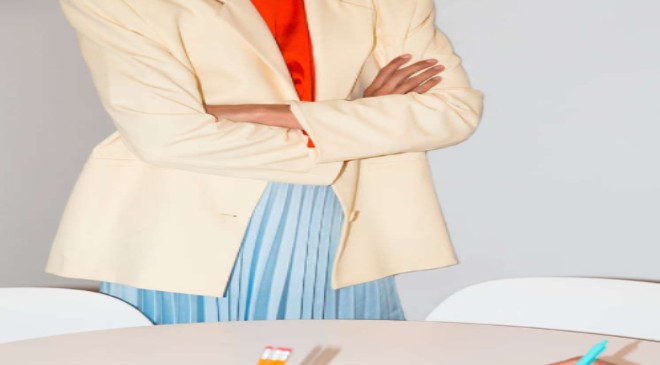 After 16 months of sitting mostly empty, offices in the U.S. are preparing to re-open their doors to employees. But, while corporate spaces have always been ruled by dress codes, a pandemic year at home will throw those strictures out the window. What will happen when workwear enters uncharted territory?

“I think workplaces are going to have to recalibrate and start to negotiate with their employees in a way that they never really had to before,” says Deirdre Clemente, a fashion historian and associate professor at University of Nevada, Las Vegas. “It’s going to be a very interesting time to see how these two groups [employers and workers] negotiate what is appropriate and not appropriate.”

Since March 2020, the standard dress code for people working from home has been casual — at best. The last time many workers set foot in an office was March 2020, and since then, working days have been full of activewear, T-shirts, and house dresses. Although many experts have recommended keeping up with daily routines, including getting dressed, one meeting is enough to make anyone want to switch a button-down for last night’s pajamas. Although it may seem like the post-vaccine landscape has ditched sweatpants for party dresses, the reality is many are not ready to give up the comfort of working from home — even if they’re not working from home.

Historically, office dress codes once played a pivotal role in the work environment, particularly for women. Since the early 20th century, when they joined the workforce in earnest, the way women dressed in the office has largely been dictated by the male gaze, according to Clemente, from the skirt length to the undergarments. “You were putting on these clothes and going into an environment that’s regulated by men, enforced often by women, because the women often reported to the head secretary,” says Clemente. “So you have women enforcing male standards of dress on other women.”

By the 1950s and 1960s, the unspoken rules became actual office policy, amid a time of political and social upheaval that had people questioning social norms and institutions. “You can’t really have the rise of written-down dress codes until you start to see people pushing back on what’s appropriate,” says Clemente. In the 1970s and 1980s, when women were taking the corporate world by storm, designers and brands like Anne Klein, Ann Taylor, and Donna Karan were servicing their needs with separates, rather than suits, to help women embrace their style while adhering to office policy and social norms. “It’s the versatility that had been coming for decades in other facets of our dress,” says Clemente.

Today, we are also pushing back on standards, perhaps even more than mid-century society.  From gender norms and pay inequity to the 9-to-5 workday, people are fighting for offices to be more flexible as they shift out of working from home. “Dress codes are becoming an antiquated way of the past, similar to the increasing irrelevance of the standard 40-hour workweek,” says Katherine Watts, Vice President of Women’s at StitchFix, a personal styling service. “As the workforce engages in more flexibility, so, too, should employers and how they think about dictating dress codes.”

Before the pandemic, industry “disruptors” were already pushing the boundaries of work dress. Startups and their leaders ditched suit-and-ties for Hanes T-shirts, jeans, and sneakers. Even corporate America was attempting to embrace more casual workwear. In 2019, Goldman Sachs sent an internal memo announcing the time was right “to move to firmwide flexible dress code” while urging its 36,000 employees to “exercise good judgment in this regard.” While the memo left a lot of room for interpretation, it still signaled a way out of the suits and pumps into business casual.

This new mindset will undoubtedly influence how retailers and brands approach workwear in the future.

For Lisa Sun, CEO of clothing label Gravitas, versatility is the future of workwear. She says the new office closet will be divided into two categories. First, she envisions women going back to the office in clothes that might not have passed muster at the office in pre-times, including athleisure pieces like sweatpants, tank tops, and T-shirt dresses. The other category of clothing we can expect to see more of are pieces that play into the desire of vaccinated Americans to finally dress up again. She says this part of the closet will be reserved for conferences, meetings, and events, but will still be an essential part of workwear as it becomes synonymous with celebration and special occasions.

“This transition will happen more as people fully go back to the office in the fall,” she says, adding that her customers are reaching for styles like the Elizabeth Top and Berta Jogger combo, which allow women to mix and match with other formal pieces to transition their look from Zoom to the conference room. “For now, you are still going with your athleisure and throwing on an old blazer.”

Our shopping habits bear out what Watts calls an “excitement for newness and dressing up again while maintaining comfortability.” She shares that there’s been a 60% uptick over the past year in requests for pieces like rompers and jumpsuits, while leggings and loungewear are down 55% and 60%, respectively. StitchFix is categorizing the new workwear as “business comfort.” “We expect to see workwear styles that are traditionally more form-fitting, like blazers and denim, to have more stretch post-pandemic, and even a looser fit,” says Watts.

Still, Clemente points out that it’s not going to be all elastic waistbands and cotton tunics. There will be pushback against this new loosened standard, and people will assert their individuality by coming to work in the spiffy looks of yesteryear. This time, in other words, it’s the rebels who will be wearing the designer suit.