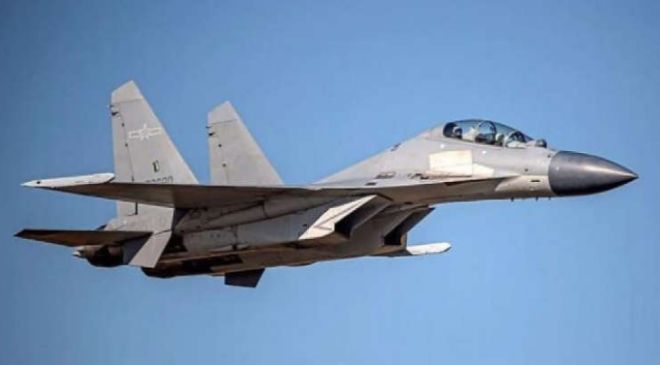 A map released earlier in the day by the ministry showed the incursions at the extreme southwestern part of Taiwan’s ADIZ. In response, the ministry said radio warnings were issued and air defense missile systems were deployed to monitor the activity.

In the radio warnings, the Taiwanese air force could be heard ordering the aircraft to “turn around and leave immediately” upon their entry into its ADIZ.

The incursions did not violate Taiwan’s sovereign airspace, which extends 12 nautical miles from its coast. The US Federal Aviation Administration defines an ADIZ as “a designated area of airspace over land or water within which a country requires the immediate and positive identification, location and air traffic control of aircraft in the interest of the country’s national security.”

Since the beginning of October, Taiwan has reported 149 incursions by Chinese warplanes into the ADIZ, statistics from the Defense Ministry showed.

After Taiwan reported record-breaking incursions over the weekend, its air force released a promotional video on Facebook which said it is determined to defend its airspace.

“When faced with our enemy’s aggression and provocation, we will never compromise,” the video said. “The determination to defend our sovereignty is unwavering.”

“The United States is very concerned by the People’s Republic of China’s provocative military activity near Taiwan, which is destabilizing, risks miscalculations, and undermines regional peace and stability. We urge Beijing to cease its military, diplomatic, and economic pressure and coercion against Taiwan,” State Department spokesman Ned Price said in a statement.

China’s Ministry of Foreign Affairs responded to the US statement by criticizing what it described as “irresponsible remarks.”

“The relevant remarks from the United States have seriously undermined the One-China Principle,” ministry spokeswoman Hua Chunying was quoted as saying in a press release on Monday night.

“In recent times, the United States has continued its negative actions in selling weapons to Taiwan and boosting its official military ties between the United States and Taiwan,” she said. “These provocative actions have damaged Sino-US relations and damaged regional peace and stability. China firmly opposes this and takes necessary countermeasures.”

Taiwan and mainland China have been governed separately since the end of a civil war more than seven decades ago, in which the defeated Nationalists fled to Taipei.

However, Beijing views Taiwan as an inseparable part of its territory — even though the Chinese Communist Party has never governed the democratic island of about 24 million people.

Chinese President Xi Jinping has refused to rule out military force to capture Taiwan if necessary.

In the past, analysts have said the flights likely serve several purposes for China, both demonstrating the strength of the PLA to a domestic audience and giving the Chinese military intelligence and skills it would need in any potential conflict involving Taiwan.

But even with the latest surge in Chinese flights near Taiwan, analysts say actual combat is unlikely.

“China needs levers to deter Taiwan from taking undesirable courses of action, especially independence-leaning initiatives,” said Lionel Fatton, a professor at Webster University in Switzerland. “For these levers to be potent, China must (1) have the (military) capabilities to activate them if needed, and (2) the threat to do so must be credible in the eyes of Taipei.”

“The recurrent air exercises are dedicated to send a clear message in this regard,” Fatton told CNN on Sunday.

“As long as Taiwan doesn’t take irreversible steps toward independence/greater autonomous presence on the international scene,” combat is unlikely, he added.