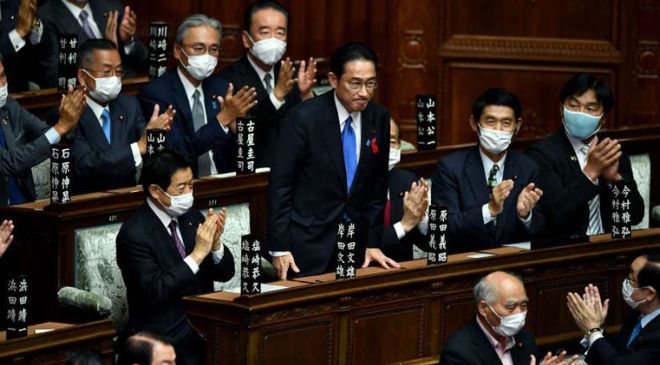 Japan’s Fumio Kishida took office as the country’s new Prime Minister on Monday, tasked with leading the world’s third-largest economy out of the coronavirus pandemic.

Kishida, 64, who was elected leader of the ruling Liberal Democratic Party (LDP) last week, was officially confirmed as the country’s 100th Prime Minster following a parliamentary vote — his elevation all but a given due to the LDP’s majority in the lower house.

A moderate liberal regarded as a stabilizing hand, Kishida inherits a Japan that has suffered surging Covid-19 infections, a stagnating economy, a rapidly aging population and increasing tensions with China.

Kishida served as the country’s foreign minister from 2012 to 2017, under Japan’s longest-serving Prime Minister, Shinzo Abe. He succeeds outgoing Prime Minister Yoshihide Suga, who announced earlier this month he would not run in his party’s leadership election following a turbulent term marked by a slump in public support as he struggled to contain the coronavirus.

What to expect from Kishida’s administration

Kishida has promised a “new capitalism” that includes narrowing the income gap and boosting consumer spending. He said the eponymous economic policies of Abe — known as “Abenomics” — failed to “trickle down” from the rich to the poor. He has also proposed a hefty recovery package worth “several tens of trillions” of yen to steer Japan’s economy out of its pandemic-induced slump.

“A deep feeling among the Japanese people that this gap between the haves and have-nots, the gap between wealth, wages and opportunity is increasing,” Henry said.

Kishida will also take on the country’s coronavirus response. Japan has vaccinated 60% of its population against Covid-19, and last week the country lifted its state of emergency amid a drop in infections. Social and business restrictions are gradually easing and Japan loosened entry restrictions for some visitors. But there are concerns the virus could make a resurgence over the winter months.

On foreign policy, Kishida has committed to “the realization of a free and open Indo-Pacific.” His predecessor Suga attended the first in-person meeting of the Quadrilateral Security Dialogue, known as “the Quad,” an informal strategic forum of the United States, Australia, Japan and India, in the US last month.

Kishida is expected to support a strong alliance with the US and other allies, and a key challenge will be balancing Japan’s deep economic ties with China and its concerns about Beijing’s growing military assertiveness in the region. Kishida also faces an increasingly aggressive North Korea.

The new Prime Minister said he also wants to take measures against the country’s declining birthrate, and believes nuclear energy should be considered as a clean energy option.

Analysts question whether Kishida will be a lasting leader, or whether Japan will return to a period of political instability similar to that of the pre-Abe era, when Japan cycled through six prime ministers in six years.

“There are so many complicated issues. And he is not the strongest leader in the ruling party of LDP. So I’m so concerned about the revolving prime minister system,” said Takeshi Niinami, economic advisor to former Prime Minister Suga and CEO of Japan’s beverage giant Suntory.