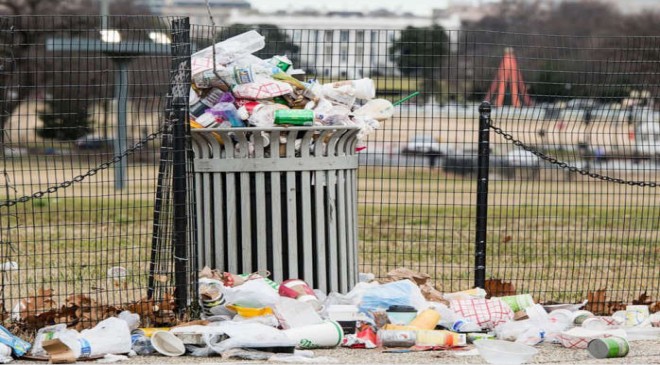 A possible government shutdown is looming as funding runs out at the end of the day Thursday, and Congress has yet to pass a temporary measure to keep the government going.

If one passes both the Senate and House it could be on President Joe Biden’s desk for his signature by Thursday.

But if Congress fails to act, a government shutdown could begin as early as Friday.

No, not everything. A full government shutdown would mean federal agencies close their doors or reduce their operations to only what is deemed essential. Programs and agencies that receive mandatory funding or are self-sufficient, such as the U.S. Postal Service, will continue to operate. Only those programs and agencies that are dependent on annual appropriations will be running with empty pockets.

Essential services necessary for public safety such as air traffic control and law enforcement will keep operating — though not necessarily at the same levels.

If essential services continue, why should I care?

During a shutdown, agencies are stripped to the bone, providing only what is necessary to protect life and property or what is required by law. Agency services most directly connected to the public are likely to cease or be severely delayed, seeing “tremendous disruption and uncertainty” as they adjust to reduced staff and operations, according to David Reich of the nonpartisan Center on Budget and Policy Priorities.

There could be delays in air travel with reductions in the Transportation Security Administration’s workforce. If you have any questions about your taxes, there won’t be anyone on the other end of the line at the Internal Revenue Service because it will not be continuing its customer service.

Will the CDC and FDA close – even though we’re in a pandemic?

No, but there might be delays. Among those agencies that typically see a reduction in operations are the Centers for Disease Control and Prevention, the Food and Drug Administration and the National Institutes of Health. While these agencies are integral to coronavirus vaccine distribution and combating the coronavirus, they will be continuing their pandemic-related functions at a much-reduced capacity.

The Department of Health and Human Services, the umbrella agency over the CDC, FDA and NIH, will be furloughing 43% of its employees, according to its shutdown contingency plan. Agencies are responsible for creating their own plans for how they will continue operating if money runs out.

Do we know for sure what services will stop?

Yes, and no. Last week, the White House budget office, the Office of Budget and Management, reminded senior agency officials to review and update their shutdown plans. Some agencies have released their plans outlining what is expected to continue and what will be put on hold.

But according to Maya MacGuineas, the president of the nonpartisan think tank Committee for a Responsible Federal Budget, it’s never clear until a shutdown which services will pass the absolutely necessary test.

“But one thing is for sure, a lot of people will go home and won’t be doing their jobs and that slows down the process of just about everything,” she said.

How many workers will be affected?

There are about 2.1 million civilian federal employees, according to the Congressional Research Service. During a shutdown, federal employees are either sent home or asked to work without pay.

For example, the Department of Defense is planning to reduce its civilian workforce by 55%, and the Environmental Protection Agency will be furloughing 99% of its employees.

For a small fraction of federal employees, their salaries are financed through funding other than appropriations.

Yet for the majority of the federal workforce, the essential employees left staffing agencies would be missing out on their paychecks.

Jacqueline Simon, public policy director of the American Federation of Government Employees, the largest union representing over 700,000 government workers, said that for many federal employees, the lack of a paycheck creates tremendous hardship.

“They have rent to pay. They have mortgages to pay, insurance payments, car payments, child support,” she said. “There is a myth that federal employees are all well paid professionals and that’s just not true.”

About a third of the employees the union represents fall into the category of people who make less than $40,000 a year and may not have the financial cushion to keep working without pay, Simon said.

Federal employees working through the shutdown get back pay, but that will not help them in the interim.

Will a shutdown affect the economy?

A government shutdown does not usually have widespread impacts on the economy unless they drone on for weeks. The 2018-2019 partial shutdown under the Trump administration resulted in economic losses of $1.2 billion each week; it was the longest in the nation’s history, lasting 35 days.

The longer a shutdown lasts, the more areas with high numbers of federal employees could see their local economies begin to suffer because those employees are not getting paid, according to Richard Kogan of the Center on Budget and Policy Priorities.

Government shutdowns create distrust with how the government functions and the uncertainty can impact the economy, MacGuineas said. Compounding the uncertainty is whether Congress is going to pass a raise or suspension to the debt ceiling so the U.S. does not default on its obligations, which is a separate and much more serious issue from the shutdown.