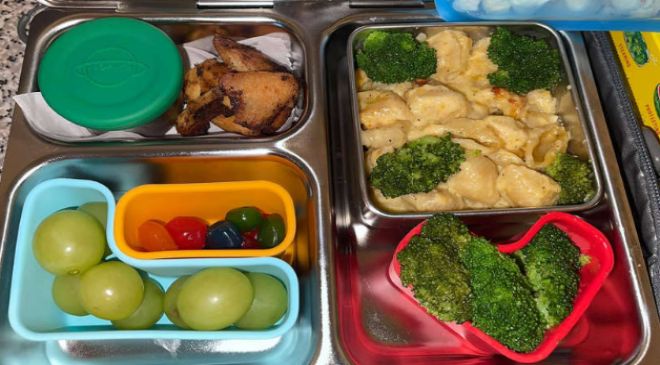 A mum has been left speechless after teachers told her to ‘simplify’ her daughter’s lunches because other children were growing jealous of the tasty selection.

The mum shared a post showing off her lunches online explaining her daughter, who is in kindergarten, is sent to school with leftovers, vegetables, fruit and yoghurt.

She is now struggling to come up with ‘simple’ ideas which will satisfy her daughter without further irritating her teachers.

I see some mamas sending lobster and seafood and very fancy, beautiful lunches. I think her teacher would just about have a heart attack if I did,’ she laughed.

She also explained she didn’t usually put much thought into what she packed, she instead just uses up whatever she has on hand.

The post attracted more than 1400 comments urging the mum to keep up the good work.

‘Those lunches look great and super kindergarten appropriate. Why should you feed your daughter less of what she likes just because other parents don’t pack good lunches,’ one woman said.

‘All I see is healthy prepared meals. You’re not even cutting the fruits

and veggies into special shapes lol. That teacher needs to calm down.’

‘They look like balanced, varied meals. And she is eating them which means you shouldn’t change a thing,’ another said.

Others said they felt the teacher was trying to fix the wrong part of the problem.

‘This looks like a teaching opportunity for the teacher. She can teach the kids how to react positively when they feel jealous of something another person has. This is definitely not your problem,’ one mum said.

Some mums said they wished their children would eat such healthy meals at school and not to worry about the jealousy.

‘Just because I make my daughter a ham sandwich doesn’t mean it’s made with any less love than this meal. But I would love if my daughter saw someone eating a lunch like this and asked me to make it,’ one mum said.

The woman eventually came to the conclusion she would continue sending the lunchboxes the same way.

‘She loves them as is. She clears the tray and tells me she ‘busted it down’,’ she said.

Most agreed the lunches weren’t ‘too fancy’ for the classroom and considered the teacher’s request ‘rude’.