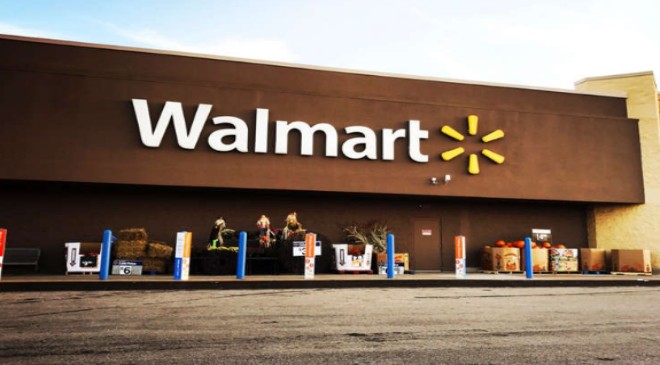 Walmart Is Running Out of This COVID Essential

Shopping during the pandemic has presented its fair share of challenges, even at generally reliable retailers like Walmart. The company experienced shortages for essential items such as toilet paper and bottled water in early 2020, and then again in November, as case numbers spiked once more. And now, as the Delta variant causes yet another surge of infections, shoppers in various areas have reported limited supplies for certain must-haves. In Pittsburgh, canned food was recently wiped out at one Walmart Supercenter, while toilet paper and cleaning supplies have been scarce at a Walmart in Casper, Wyoming. There’s one specific Walmart shortage, however, that’s a lot more widespread. Read on to find out what major COVID essential this big-box retailer is running out of across the board.

Walmart is running out of rapid at-home COVID tests online.

It appears that Walmart is selling out of its rapid at-home COVID tests. Currently, the retailer’s online store lists all four of its rapid tests as out of stock. The only coronavirus tests available on Walmart.com are PCR collection kits, which cost anywhere from $95 to $950. One rapid test, BinaxNOW, is also sold online at Walmart’s sister company, Sam’s Club, but it’s listed as out of stock there, too.

“We have seen significant demand for at-home COVID-19 testing kits and are working closely with our suppliers to meet this demand and get the needed product to our customers,” a Walmart spokesperson told Best Life. “We do anticipate increased availability of the product in the coming weeks.”

Other online stores do not have this item in stock either.

Walmart isn’t the only company experiencing a shortage of these tests. Walgreens’ online store lists two of its rapid at-home tests, QuickVue and BinaxNOW, as out of stock for shipping. The BinaxNOW test is also sold at Kroger.com, but it’s not in stock there either, and the QuickVue test is sold out on Amazon.

The shortage of these tests is a result of the U.S. failing to develop a market for at-home home tests big enough to handle the newfound demand brought on by the Delta variant, according to an investigation from Newsy.

“Right now with Delta is the first time you actually see any demand for these tests,” Sara Citrenbaum, a research specialist at rapidtests.org, told Newsy. “Last year we couldn’t convince places for the life of us to actually utilize these tests.”

Some stores have had to put a purchasing limit on these tests.

In late August, CVS made a move to stop customers from hoarding at-home COVID tests amid the increased demand. The retailer placed an in-store limit of four for the BinaxNOW test, QuickVue test, and a test from Ellume, and an online limit of six each, Bloomberg reported on Aug. 26.

This restriction was made “in order to serve our customers’ OTC testing needs, and due to high demand,” a CVS spokesperson told Bloomberg in an email, but CVS’ rapid tests are currently out of stock on its website. Rite Aid has also placed a purchasing limit of one for BinaxNOW’s two-count test, but this test is not currently available for purchase online.

Manufacturers for these tests say they’re working to ramp up production.

Hopefully, this shortage will be short-lived, as manufacturers work to up production to meet newfound demand. According to Newsy, Abbott, the maker of the BinaxNOW test, had such a surplus of its tests in May due to lack of demand that the company started to lay off employees and throw away test components that had reportedly expired before getting used. Now, they can’t keep up. Ellume told Bloomberg it was working to increase production, while Abbott told AARP that it has also started “scaling up manufacturing” recently.

“We’re hiring people and turning on parts of our manufacturing network that were idled or slowed when [testing] guidance changed and demand plunged,” an Abbott spokesperson told AARP. “While there will be some supply constraints over the coming weeks as we ramp back up, we are [pulling] resources from all over the company to help meet this unprecedented demand.”