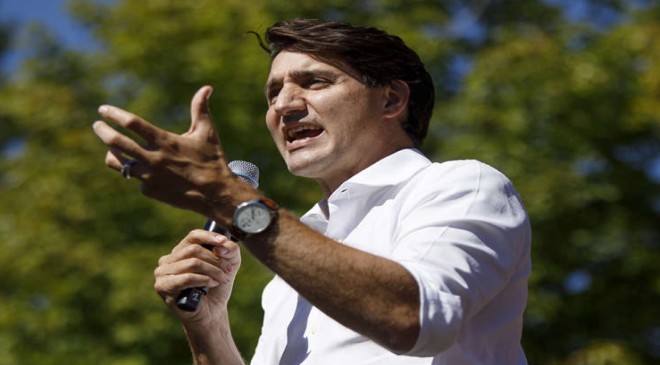 But staying on Biden’s radar will be key for Trudeau, as he resettles into the Prime Minister’s Office.

Canada’s election Monday capped a campaign that paid very little attention to foreign policy or the country’s vital relationship with the United States. Trudeau, however, did receive two late-campaign endorsements from Barack Obama and Hillary Clinton.

The few times U.S.-Canada ties surfaced during the 36-day campaign Trudeau found himself forced to defend how well he has nurtured his connection with Biden. Since the U.S. election, the leaders have met face to face just once, during June’s G-7 summit. They have yet to hold an official, in-the-flesh bilateral visit.

A journalist challenged Trudeau during a leaders debate earlier this month on his ability to get Biden on the phone to discuss key issues like the Covid-19 restrictions at the border.

“Did Mr. Biden forget about you?” the journalist asked Trudeau during the French-language contest after she noted the two leaders had only had three official calls since Biden became president last January.

“On the contrary, we spent a whole day in discussions as soon as he arrived,” Trudeau replied during the Radio-Canada event, noting their virtual meeting in February produced a bilateral “Roadmap for a Renewed U.S.-Canada Partnership.”

“It was one of his first meetings to establish precisely the course that we will take together. Relations with the United States are very good.”

The election result means Trudeau and Biden can quickly pick things back up.

Biden’s arrival and his personal connection with Trudeau have eased tensions at the top following four tumultuous years in the relationship under the Trump administration.

But Trudeau has come under fire from critics who charge that he is allowing Canada to be an afterthought for the U.S. president.

For example, the prime minister was forced to explain at a campaign stop why Canada was not part of AUKUS, the new defense and technology-sharing group comprising the U.S., U.K. and Australia.

Trudeau told reporters AUKUS was about nuclear submarines and argued that Canada, unlike Australia, is “not currently or any time soon in the market” for them. He stressed that Canada continues to be a strong member of the Five Eyes intelligence alliance, which includes the AUKUS countries as well as New Zealand.

Trudeau’s Liberal platform contains only a few references to the United States, including pledges to launch a “Canada-U.S. Battery Alliance” to help build a supply chain for electric vehicle production, collaborate on border carbon adjustments and cooperate on NORAD’s modernization.

But there are a host of important issues that need resolution between the two neighbors — here are nine key areas to watch as Trudeau forms a new government.

Relationship status: Biden’s arrival in the White House raised questions whether the Democrat could revive what was touted as a “bromance” between Trudeau and Obama.

Maryscott Greenwood, CEO of the Canadian American Business Council, told POLITICO she doesn’t buy the argument that things have been frosty between Trudeau and Biden. After Biden was sworn in, she said the first call Biden took was from Trudeau, and he held his first official bilateral meeting with the Canadian leader.

Greenwood noted, however, that there are questions to ask about the status of the commitments in the leaders’ roadmap. The blueprint lays out about dozens of items — from economic recovery, to climate change, to supply chain resiliency.

Biden has been focused on Covid-19, infrastructure and foreign policy, Greenwood added.

Border closure: One area where critics point to a potential disconnect has been the 5,525-mile border.

Canada lifted its Covid-19 restrictions at its frontier on Aug. 9 for fully vaccinated American travelers. But the Biden administration has yet to welcome Canadians at its land crossings.

In fact, the U.S. announced Monday it will extend its restrictions for another month until Oct. 21.

While U.S. politicians who represent border districts are putting the most heat on Biden to reopen the frontier, Trudeau has been pressed to explain why the two countries have taken different routes.

“I spoke often with Joe Biden about our borders to coordinate as much as possible,” Trudeau said during the Radio-Canada debate. “But it’s not up to the United States to tell us how we should manage our borders and our population. Nor is it up to us to tell Americans how to manage them.”

Climate: Climate policy will be a key area for collaboration — at the United Nations Climate Change Conference and beyond.

It’s top of mind for Biden, who will focus Tuesday on climate change and Covid-19 on when he makes his first presidential address to the United Nations General Assembly.

Trudeau will have just a little over a month to put together a cabinet before world leaders and their officials gather in Glasgow for the U.N. climate conference. The high-profile gathering offers the new Canadian government an opportunity to turn around the country’s reputation of being a climate laggard.

Trudeau’s platform emphasized many green pledges, including a vow to accelerate Canada’s G-20 commitment of eliminating fossil fuel subsidies by 2025. The Liberals say they will do it by 2023.

The Liberals also support a border carbon adjustment. Consultations in Canada are underway and are expected to continue into the fall.

But the Liberals shared little in terms of specifics on the eventual policy, from speed of implementation, scope and what to do with revenues. Canada’s finance department released a background paper last month.

Buy America: Mark Agnew, senior director of international policy for the Canadian Chamber of Commerce, told POLITICO recently that Biden has “doubled down” on Buy America with announcements throughout 2021.

Agnew said the Canadian business community is also keeping watch for any fallout related to a new role in the White House — “Made in America” director Celeste Drake. The White House’s supply chain reviews, some of which have already been published, is another area of possible concern, he said.

Trade: U.S.-Canada goods and services trade was worth an estimated $718 billion in 2019. That year, the U.S. bought $358 billion in imports from Canada and exported $360 billion north of the frontier.

The USMCA turned one year old earlier this summer and was celebrated at a trilateral gathering in Mexico City. Ahead of that event, United States Trade Representative Katherine Tai welcomed Canada’s International Trade Minister Mary Ng to Washington where they discussed softwood lumber, dairy and reform of the World Trade Organization.

Tai used the occasion to call the U.S.-Mexico-Canada Agreement “the rebirth of our commitment to each other in an ongoing way” and credited the USMCA for making the North American economy more competitive with China.

Softwood lumber remains an irritant between the two countries since the current agreement expired in 2015. Ng had said Canada wants to negotiate a new deal, and Tai has been under pressure to respond.

In a policy brief released last week, the Brookings Institution noted the ways the Covid pandemic has amplified the importance of regional economic relations. The paper identified a handful of priorities for the United States-Mexico-Canada trade deal, including climate, building resilient supply chains and expanding digital trade.

Critical minerals: In their February “roadmap,” Trudeau and Biden committed to build the necessary supply chains to make their countries global leaders in all aspects of battery development and production.

A bilateral critical minerals working group, made up of U.S. and Canadian federal departments and agencies, was active over the summer.

Pipelines: Biden and Trudeau were on different sides of Keystone XL’s cancellation. The two countries are also at odds over Enbridge Inc.’s Line 5 oil pipeline, which is at the heart of a legal dispute between the company and the state of Michigan.

Line 5 has been the subject of shutdown calls along its route in Michigan over environmental concerns, but Canada has called for the pipeline to continue pumping. Michigan recently halted court-ordered mediation with Enbridge.

China and the ‘Two Michaels’: Trudeau has been counting on Biden to help Canada find a way to resolve the prime minister’s top foreign policy issue: Freeing Michael Kovrig and Michael Spavor from Chinese detention.

The two Canadians have been behind bars in China for more than 1,000 days following arrests Trudeau has labeled “arbitrary.” Their cases are widely seen as connected to senior Huawei executive Meng Wanzhou’s battle in a Canadian court against a U.S. extradition request. Meng’s arrest has angered Beijing.

Trudeau uses every opportunity to press the issue with Biden, who made a commitment back in February to help the men.

Canadian property tax on foreigners: The Liberal platform says the party intends to move forward with the country’s first-ever national tax on vacant land and residential property owned by non-residents or non-Canadians.

The plan, first announced in last April’s budget, says the one percent tax is scheduled to come into force Jan. 1, 2022. Public consultations on the proposal closed last week.

The prospect of a tax caught the attention of Americans, especially those who own vacation property in Canada. Rep. Brian Higgins (D-N.Y.) has threatened to push for a retaliatory tax on Canadians with property in the U.S.