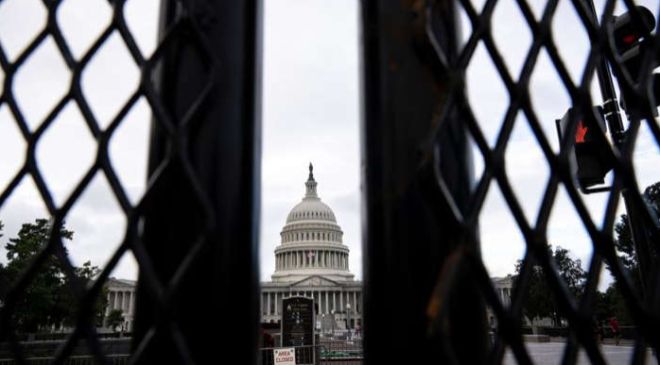 Washington DC has prepared for Saturday’s rally in support of those arrested for storming the Capitol on 6 January by mounting the kind of security operation it failed to put in place before the attempted coup.

The city has surrounded congressional buildings with reinforced fencing, called up large numbers of police officers and put the national guard on standby to prepare for the “Justice for J6” protest near the Capitol building.

But even amid warnings from the Department of Homeland Security about threats of violence, there were signs the demonstration may fall short of the impact its organisers hope for, as mainstream Republican politicians and some ardent pro-Trump groups distanced themselves from the rally.

The protest was called to demand the release of about 650 people charged with offences after thousands of Trump supporters smashed their way into the Capitol in an attempt to prevent members of Congress certifying the 2021 presidential election.

Four people died during the riot, including a woman shot by a police officer as she tried to get on to the floor of the House of Representatives. Brian Sicknick, a Capitol police officer attacked by the protesters, died the next day.

Nearly 60 people have pleaded guilty, mostly to relatively minor crimes including obstruction of official proceedings and illegally demonstrating in the Capitol.

Supporters have characterised them as “political prisoners” who were lawfully protesting at the urging of Donald Trump, who held a rally nearby at which he urged supporters to “fight like hell” to defend his claim to have won the 2020 election.

The organisers, Look Ahead America, said Saturday’s rally was not intended to demonstrate support for Trump and appealed for those attending not to wear political paraphernalia.

The group’s director, Matt Braynard, a former Trump campaign operative, told CNN it would be “a completely peaceful protest”.

Look Ahead America applied for a permit for 700 people to attend the protest. It remains to be seen if it will attract even that number after the demonstration was disparaged by some pro-Trump groups and mainstream Republicans who have spent the past few days distancing themselves from the protest.

Senator Lindsey Graham called on police to take a “firm line” with demonstrators.

“If anybody gets out of line, they need to whack ‘em,” he told the New York Times.

The Proud Boys and the Oath Keepers militia, whose members are among those facing some of the most serious charges over the 6 January attack, appear to be avoiding the event. A Proud Boys social media channel said the protest “sounds like bait” subject to government surveillance and warned members not to go.

Trump, who was impeached for inciting the riot but acquitted at trial in the Senate, has condemned prosecutions over 6 January.

“Our hearts and minds are with the people being persecuted so unfairly relating to the 6 January protest concerning the Rigged Presidential Election,” he said in a written statement.

Trump then declared: “In the end, however, JUSTICE WILL PREVAIL!”

The former president will not be attending the rally. He is scheduled to spend the day at a golf tournament in New Jersey.