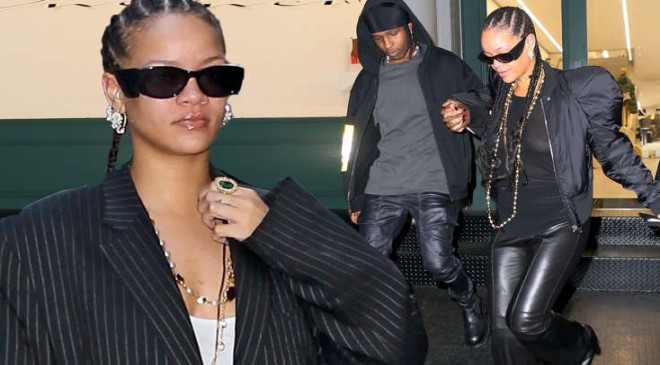 They arrived fashionably late to the star-studded Met Gala in rivaling blanket-inspired ensembles.

And Rihanna and her boyfriend A$AP Rocky continued their fashion parade on Friday afternoon in New York City.

The 33-year-old songstress and the 32-year-old rapper, who were captured holding hands, slipped into near identical faux leather trousers for their outing.

Rihanna’s had a dramatic flare to them, while A$AP Rocky’s mimicked the look of skinny jeans.

The Only Girl hitmaker paired her trendy trousers with a see-through top, opting to go braless beneath it.

She layered up her look with a bomber jacket featuring dramatic shoulder pads and added inches to her frame with a pair of platform boots.

Rihanna’s hair was styled in braids that flowed down onto her back and chest as she strolled beside her boyfriend.

She accessorized with a lengthy beaded necklace and shielded her eyes with a pair of designer shades.

Meanwhile, A$AP threw on a black T-shirt and a cozy hooded sweatshirt.

The Lana Del Rey collaborator finished off the look with some black rubber boots and his go-to pieces of jewelry.

Earlier in the day, Rihanna was spotted rocking a slightly different outfit, replacing her bomber with a blazer and her mesh top for a plain white tee.

She also happened to pound the pavement in a pair of white sneakers, instead of her retro kicks.

A$AP Rocky and Rihanna have been romantically linked since late 2020, following seven years of friendship.

And on Monday, the couple made their Met Gala debut, hitting the red carpet with the likes of Jennifer Lopez and Billie Eilish.

Rihanna modeled a billowing Balenciaga coat dress, while her rapper beau doted on her in an oversized blue, red, and yellow checker print wrap.

Ditching his wrap, which was designed by ERL, he unveiled his fashion-forward tuxedo.

The Met Gala made its return on Monday after being cancelled in 2020 amid the pandemic. This year it was pushed to September from its traditional slot on the first Sunday in May.

The theme was In America: A Lexicon of Fashion and the event featured a heavy-hitting contingent of celebrity co-chairs: actor Timothée Chalamet, musician Billie Eilish, poet Amanda Gorman and tennis star Naomi Osaka.