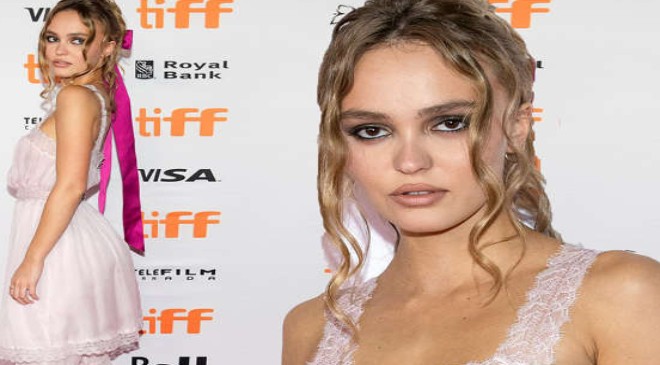 Lily-Rose Depp looked utterly gorgeous in a light pink dress while attending the premiere of her film Wolf at the Toronto International Film Festival.

As the 22-year-old French-American actress graced the red carpet, all eyes were on her chic ensemble and ethereal updo with curls hanging down.

Her tresses were secured with a long purple ribbon, for an extra touch of glamour, which complimented her subtle lip and dramatic smokey eye.

The daughter of Hollywood legend Johnny Depp, who has served as a Chanel brand ambassador for years, completed her look with black pumps.

During the event, she mingled with Jane Doolan, Jessie Fisk and director Nathalie Biancheri.

The storyline of the film will be centered around an individual named Jacob, who believes that he is actually a wolf, living in a facility with other people who do not identify as human.

When the character comes into contact with a romantic interest, he is forced to make a decision between his personal conviction and potential future as a human.

She is also currently set to appear in the upcoming Christmas-themed comedy feature, Silent Night.

The upcoming film will be centered around an extended family coming together for a holiday dinner in the countryside.

Camille Griffin, who is making her directorial debut with the feature, also wrote its screenplay.

As for her personal life, the model recently caused a media frenzy after she was spotted kissing actor Austin Butler during a trip to London in August.

Neither of the two has made any public comments regarding the steamy makeout session as of yet.

On Monday, she crossed paths with her ex-boyfriend Timothée Chalamet at the long-delayed Met Gala in New York City.

The former couple, who also starred in the 2019 movie The King together, famously made headlines when they were photographed kissing on a yacht in September 2019.