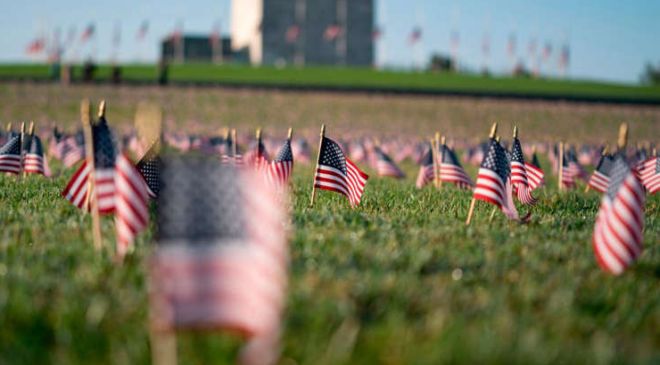 The United States has reached another grim milestone in its fight against the devastating Covid-19 pandemic: 1 in 500 Americans have died from coronavirus since the nation’s first reported infection.

As of Tuesday night, 663,913 people in the US have died of Covid-19, according to Johns Hopkins University data. According to the US Census Bureau, the US population as of April 2020 was 331.4 million.

It’s a sobering toll that comes as hospitals in the US are struggling to keep up with the volume of patients and more children are grappling with the virus. In hopes of managing the spread and preventing more unnecessary deaths, officials are implementing mandates for vaccinations in workplaces and masking in schools.

They’re fighting against daily case, hospitalization and death rates that jumped after the early summer as the highly contagious Delta variant became dominant.

The US averaged 1,805 new Covid-19 deaths each day over a week as of Tuesday — significantly higher than the low average of the year (218) reached July 5, according to Johns Hopkins.

With only 54% of the population fully vaccinated, the rate of people initiating vaccinations each day (more than 341,900) is a 4% drop from last week and 28% drop from a month earlier, according to Centers for Disease Control and Prevention data.

Health experts have hailed vaccinations as the best source of protection against the virus, noting that the majority of people hospitalized with and killed by Covid-19 are unvaccinated. In Pennsylvania, from January 1 to September 7, 97% of the state’s Covid-19 deaths were among unvaccinated people, Pennsylvania’s acting secretary of health said Tuesday.

Another layer of strong protection, experts say, is masking.

The CDC recommends people — even those fully vaccinated — wear masks indoors in areas with substantial or high community transmission. More than 99% of the population lives in a county with one of those designations.

In Ohio, where children’s hospitals are overwhelmed with Covid-19 and respiratory cases, Gov. Mike DeWine is encouraging schools to issue mask mandates since the state legislature has told him it would overturn any mandate he issued.

“Reasonable people may disagree about a lot, but we can all agree that we must keep our children in the classroom so they don’t fall behind and so their parents can go to work and not take time off to watch their kids at home,” DeWine said.

The combination of masks and vaccinations is the way to keep children in school, Dr. Anthony Fauci, director of the National Institute of Allergy and Infectious Diseases, told CNN on Tuesday.

“If you surround the kids with vaccinated people and you have everybody wear a mask, you can get a situation where the children will be relatively safe in school,” Fauci told CNN’s Jake Tapper.

A CDC ensemble forecast that uses 10 models from other researchers predicts Covid hospital admissions to decrease during the next four weeks for the first time since the June 23 report.

A total of 97,051 people are currently in hospitals with Covid-19, according to data from the US Department of Health and Human Services.

o manage the spread of the virus, many officials and experts have promoted vaccine mandates — but others are opposing such measures.

New York issued an order in August requiring all health care workers be vaccinated against Covid-19 by September 27. But on Monday, 17 Catholic and Baptist medical professionals filed a federal complaint seeking to prevent the state from enforcing the mandate, saying they oppose getting the vaccine for religious reasons.

Because the mandate does not require health care workers to receive their first dose of the vaccine until September 27, the judge’s order states the temporary restraining order “does not, as a practical matter, go into effect until that date.”

A hearing is scheduled for September 28.

“Governor Hochul is doing everything in her power to protect New Yorkers and combat the Delta variant by increasing vaccine rates across the State,” Crampton-Hays said.

In Los Angeles, despite a mandate that all city employees be inoculated against the virus, nearly a quarter of the police force is seeking an exemption, according to Mayor Eric Garcetti’s office. Those who are not vaccinated will be required to show evidence of weekly testing and a negative Covid-19 result if regularly reporting to work.

By November 1, Nevada workers who serve “vulnerable populations” must show proof of vaccination under a new emergency regulation passed Tuesday.

New hires must have at least one dose by their start date and must follow through on the required vaccination schedule to remain employed. Workers are allowed to ask for a medical or religious exemption.

Meanwhile, most American adults believe that the public health benefits of Covid-19 restrictions on activity are worth the economic and lifestyle costs they exact, a report released Wednesday by the Pew Research Center shows.

The Pew report also found about 80% of adults say they believe mask requirements on airplanes and public transportation are necessary to address the spread of the virus, and that international travel should be restricted.

On Friday, the US Food and Drug Administration will meet to discuss whether most Americans need a booster of their Covid-19 vaccine.

Unlike other meetings to discuss the vaccine, this one, with requests from Pfizer to authorize a third dose for most people, won’t be a slam dunk.

“This will be much messier than in December,” said Dr. William Schaffner, an infectious disease specialist at Vanderbilt University. The FDA committee was quick to recommend authorization of vaccines made by Pfizer and rival Moderna last December.

When the FDA’s Vaccines and Related Biological Products Advisory Committee meets Friday, it will be presented with dueling data, some of it suggesting there’s a need for boosters, but other pieces of data suggesting there is no such need.

On the other hand, an Israeli study found that over time, the vaccines’

power to keep people from getting very sick with Covid-19 diminished. Looking at illnesses in the second half of July, that study found that those who’d received their second dose of Pfizer’s vaccine in March were 70% more protected against severe disease than those who received the second shot in January.

President Joe Biden announced plans last month to begin administering booster doses next week. While she wouldn’t say directly if that date would be met, CDC Director Rochelle Walensky said Tuesday she is hopeful about the timeline to get doses administered.

If the booster does get approved, experts will still have to wait and see how much protection is added by the third dose.

“I would hope that that would sustain us for an extended period of time, but I don’t know that right now,” Fauci said. “We’re just going to have to do the boost, and then follow people long enough to determine what the durability of that protection is.”

Moderna on Wednesday said booster doses of its Covid-19 vaccine recharged waning antibody levels and boosters formulated to match variants also worked as expected, according to their research team.

The 80 volunteers were given two doses of Moderna’s vaccine. Their blood was tested six months later and they got a third shot.

Moderna has started its application for emergency use authorization of the third dose of its vaccine, but the FDA has not scheduled discussion of Moderna’s application.