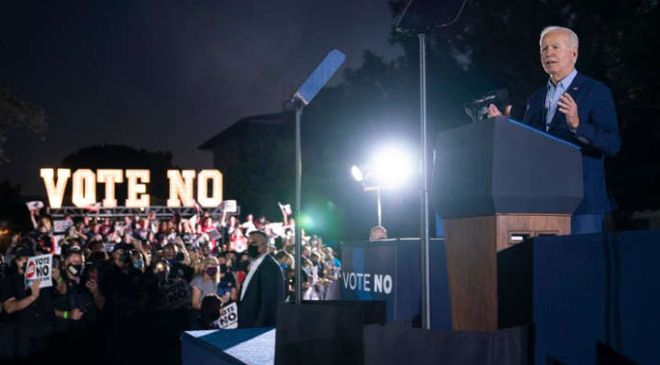 President Joe Biden on Monday offered his full-throated support of California Gov. Gavin Newsom as the pair attempted to thwart the recall effort against the Democratic governor by linking former President Donald Trump to the lead Republican candidate.

The President’s message on the eve of Election Day echoes the way Newsom has closed his campaign: By likening conservative talk radio host Larry Elder, the candidate most likely to replace Newsom if the recall is successful, to the former President, who lost California by nearly 30 percentage points in 2020.

“All of you know last year I got to run against the real Donald Trump,” Biden said, making the sign of the cross across his chest. “Well, this year, the leading Republican running for governor is the closest thing to a Trump clone that I have ever seen in your state.”

Biden added: “He is the clone of Donald Trump. Can you imagine him being governor of this state? You can’t let that happen.”

The event with Biden represents the crescendo of Newsom’s campaign strategy to nationalize the effort to recall him by calling on top Democratic leaders — from Vice President Kamala Harris to Sens. Bernie Sanders, Elizabeth Warren and Amy Klobuchar — to rally on his behalf. The anti-recall campaign also ran television ads featuring former President Barack Obama touting Newsom and a photo with Elder standing next to Trump.

Biden, speaking in California, also touted the importance of the recall election, arguing the results will reverberate beyond just the Golden State.

“The decision you’re about to make isn’t just going to have a huge impact on California, it’s going to reverberate around the nation, and quite frankly, not a joke, around the world,” Biden said.

The decision to nationalize the race against Elder has propelled Newsom’s campaign in the closing weeks of the recall, but it has also allowed him to focus less on thornier local issues like homelessness, drought and crime, all issues Elder has tried to use against Newsom.

Newsom continued this message against Elder shortly before the Democratic leader introduced Biden, Trump’s successor, to the stage.

“Does it surprise any of you that we have someone on the other side of this that is to the right of Donald Trump,” Newsom said.

Newsom continued, saying that while the 2020 was the “most important election in our lifetime,” Elder represented the fact that “Trumpism is still on the ballot in California.”

“We may have defeated Donald Trump, but we have not defeated Trumpism,” Newsom said.

Trump has not endorsed in the California recall, but Elder has run in line with many of Trump’s policies. And the former President has buttressed some of Elder’s baseless claims of voter fraud before the election is even decided.

For Newsom and his top operatives, the decision to talk about Trump was made to boost turnout. Democrats were worried earlier in the summer that the off-year, off-month recall election would surprise Democratic voters, potentially leading to depressed turnout among the party’s most reliable voters and helping Republican overcome their significant party registration disadvantage in the state.

A string of recent polls show Newsom and the anti-recall effort in a strong position headed into Election Day. The most recent survey from the Public Policy Institute of California finding that 58% of likely voters favor keeping Newsom in office, compared to 39% who would like to remove him.

The recall is primarily a vote-by-mail election, with every active voter in the state receiving a ballot in the mail before Election Day. And for those ballots to be counted, they must be returned either in person by the close of polls on Tuesday, or they must be postmarked by Election Day and received by county officials by September 21.

It’s those poll numbers, along with the ballots that have been returned, that have injected Newsom’s campaign with unmitigated confidence.

Clegg said that the Delta surge as a “real inflection moment in this campaign” that spurred voters to not only pay attention to the race, but each candidate’s position on Covid-19.

It was a turning point for us,” Clegg said of the Delta surge. “What Delta brought into clear, clear focus was what the stakes are in this election when one party has basically become an anti-science, anti-vaccine, anti-public health party.”