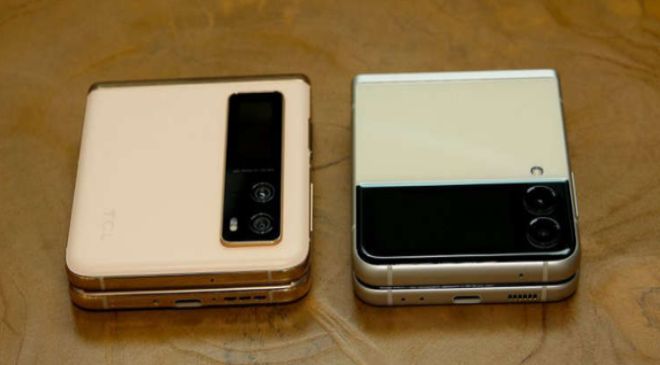 For over two years, TCL has been showing prototypes of possible foldable phones to reporters. One had a 10-inch screen that bent into thirds. Another featured a screen that wrapped around the wrist. Yet another had a large screen that closed like a book, one featured a screen you pulled out to expand it into a tablet and a more futuristic model included foldable and rollable displays in the same device.

And then there was a clamshell model that looked a lot like Samsung’s Galaxy Z Flip and Motorola’s Razr. That device, codenamed the Chicago Project, is the one TCL planned to launch early in the fourth quarter. It aimed to sell the phone for less than Samsung’s $1,000-and-higher foldables and Motorola’s $1,400 Razr. The Chinese giant had the foldable nearly done — and this week even shipped CNET one of the nearly finished prototypes to prove it was real — but ultimately decided to scrap it and start over.

Now TCL won’t launch its first foldable for at least 12 to 18 months, Stefan Streit, TCL’s chief marketing officer, said in an interview ahead of Friday’s announcement. And when it introduces the device, it won’t be Chicago but a revamped product. For now, hopes for a lower-cost foldable device will have to wait.

We could finish this product and bring it to the market, but this felt somehow … not right,” Streit said. “For us, this category is really, really important. We will bring products. We will bring a number of products.” Just not the first device TCL thought it’d launch.

While TCL has sold phones under the low-cost Alcatel brand for years — and for a brief period under the BlackBerry name — it has only been selling devices under its own TCL branding since early 2020. It’s among the top players in televisions, but TCL doesn’t have the recognition needed in mobile to pull in people willing to try a new product category like foldables. Even Samsung, the world’s biggest phone maker, is still in the early days of getting consumers to trust that foldables are durable enough to withstand normal daily use.

TCL decided to cancel the introduction of its first foldable because of several “commercial” factors — weakness of its brand, expensive components because of the pandemic and lack of carrier support, Streit said.

Perhaps most of all, the move by TCL is an acknowledgement that foldables may not be ready for mainstream users — at least not in huge volumes and at low prices.

Foldables remain a tiny part of the overall smartphone market. This year, vendors should sell about 7 million such devices, according to Strategy Analytics, while companies will sell 1.35 billion regular smartphones. That estimate from last month included potential TCL sales.

It’s not until Apple introduces its first foldables, possibly in the second half of 2023, that the devices start selling in higher numbers, Strategy Analytics analyst Ken Hyers said in August. His firm expects about 15 million foldables to be sold around the world in 2023 and more than double that amount the following year. In 2026, the number of foldables sold across the globe should hit nearly 170 million, Strategy Analytics said.

TCL had aimed to launch a fully featured foldable by the end of 2021 that cost less than the devices from Samsung, but the lowest price it could reach with its first device was $800, Streit said. Samsung’s new Z Flip 3 starts at $1,000, while its Z Fold 3 retails for $1,800.

Competing with the Z Flip 3

At the same time, some of Chicago’s specs aren’t as high-end as those in the Z Flip 3. The two devices look similar, but TCL’s foldable is a little thicker, a little wider and a little heavier. And the front screen is smaller at 1.1 inches diagonally versus 1.9 inches for the Z Flip 3. The interior screens are about the same size: 6.67 inches diagonally for TCL and 6.7 inches for Samsung.

Chicago isn’t water resistant like the Z Flip 3, and it’s likely not as sturdy, Streit said. It uses Qualcomm’s Snapdragon 765G processor, which isn’t as fast or as powerful as the Z Flip 3’s Snapdragon 888. Chicago also has a slower version of 5G and couldn’t be used on Verizon’s ultra-wide-band network. Its fastest download speed is 2.7 Gbps versus the Snapdragon 888’s peak of 7.5 Gbps.

Chicago would have been available in one color, “Pastel Gold,” which looks like a peach-color matte plastic body with gold metal detailing on the sides and edges of the hinge. When displayed next to Samsung’s cream-color Z Flip 3, it’s sometimes difficult to tell the devices apart.

One area where Chicago could have had an advantage over the Z Flip 3 is the part of the interior display where it folds in half. The crease in the prototype sent to CNET is less pronounced — both visually and when touching the display — than on the Z Flip 3. CNET’s Patrick Holland, who reviewed Samsung’s foldables, said the Z Flip 3’s crease doesn’t bother him, though it is noticeable when interacting with the middle of the screen.

TCL decided to cancel Chicago before Samsung’s August Unpacked event, Streit said. But seeing the Z Flip 3 cemented its decision, even though Chicago was finished except for tweaks to features like the software and the hinge.

“I’m using it every day,” Streit said of Chicago. “Nothing has changed” about how much TCL believes in foldables, he said, but market conditions need to improve before it launches a consumer device. For now, TCL has already started working on the foldable it hopes to actually sell.

That device, while similar to Chicago, will be thinner and sturdier, Streit said, but it will likely still be a clamshell, high-tech flip phone design.

“It’s … the most natural step from where we are coming from,”  he said.

The hope is that in late 2022 or early 2023, the market will be ready for a lower-cost foldable, Streit said. Component prices will likely be back to normal, TCL’s brand will be stronger, 5G will be broadly deployed so carriers can support other phones, consumers will be looking for new types of devices and prices will finally be low enough for wide adoption, he said.

“We feel like this … is the better time for TCL to then launch something which … hopefully brings it into more mass market segments,” Streit said.

For all of you curious about what might have been, here are the key specs: