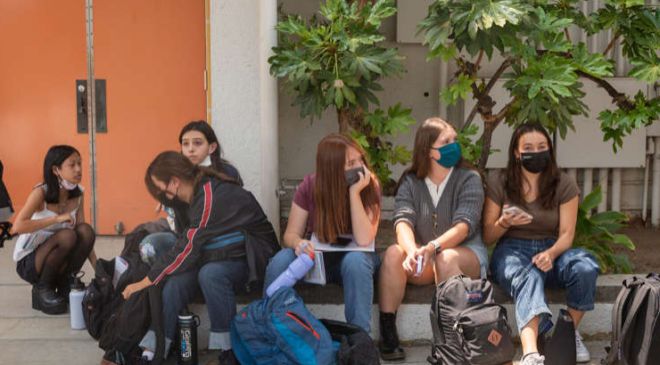 Los Angeles is the first major school district in the United States to mandate coronavirus vaccines for students 12 and older who are attending class in person.

With the Delta variant ripping across the country, the district’s Board of Education voted, 6-0, to pass the measure on Thursday afternoon. The Los Angeles Unified School District is the second largest in the nation, and the mandate would eventually apply to more than 460,000 students, including some enrolled at independent charter schools located in district buildings.

The interim superintendent, Megan Reilly, said at Thursday’s board meeting that student vaccination was one way to ensure that the district’s classrooms would be able to remain open. Los Angeles had some of the country’s most extended school closures last year.

Speaking about a 12th-grade athlete whom she met during a vaccination drive, Ms. Reilly said, “We owe this child his senior year.”

Los Angeles already has a strict vaccine mandate for teachers and staff members, and the new student mandate will further increase the safety of the classroom. But it is also likely to be more divisive, with far-reaching educational repercussions.

According to the Los Angeles County Department of Public Health, 58 percent of 12- to 18-year-olds living within the district’s boundaries have already received at least one dose of a vaccine. But polls show that many parents are hesitant to vaccinate their children against the coronavirus, raising the question of how many families will keep their children home to learn online or transfer them to schools that do not require the shots.

Leaving the classroom again could be debilitating for some students. When virtual learning was widespread last academic year, millions of children fell behind academically; the impact was largest on low-income students and students of color. The Los Angeles Unified student body is 73 percent Latino, 11 percent white, 8 percent Black and 4 percent Asian. Eighty percent of students qualify for free or reduced-price meals.

Vaccine hesitancy in Los Angeles exists across a broad range of demographic and ideological groups, from affluent, largely white, liberal parents who oppose a range of mainstream childhood vaccination practices; to conservative activists who have specifically targeted the coronavirus vaccines; to low-income Black and Hispanic families who are wary of the medical establishment.

Nick Melvoin, a Board of Education member who supports the mandate, said that in the hours after news of the proposed resolution was first published, about 60 percent of the emails he received expressed opposition to the mandate, which he noted was most likely a reflection of the opposition’s organizing strength.

Mr. Melvoin said he did worry about it pushing some families back into online school, or to charter or private school options that do not require vaccination. Mr. Melvoin, known as a supporter of the charter school sector, said he would encourage local charters to adopt similar mandates.

Reopen California Schools, which sued the state in an attempt to prevent mask mandates, asymptomatic virus testing and quarantines, said on Thursday that it expected “numerous legal challenges to the vaccine mandate for children.”

It noted that coronavirus vaccines do not provide “sterilizing immunity” — vaccinated people can still be infected — and thus would not “guarantee a virus-free school environment.”

Vaccinated individuals are one-fifth as likely to be infected with the coronavirus as the unvaccinated, and hospitalizations and deaths among the vaccinated are rare. All 50 states mandate vaccines for school attendance, such as those that protect against polio, measles, mumps, rubella and chickenpox.

Some parents, however, are likely to oppose any mandate because no coronavirus vaccine for children ages 12 to 15 has received full government approval. The Food and Drug Administration has authorized the Pfizer-BioNTech vaccine on an emergency basis for that age group and could potentially grant full approval this year. (No vaccine has been authorized in the United States for children younger than 12.)

Some public health experts and parents have raised concerns about a rare side effect of that vaccine, a heart condition called myocarditis that is known to disproportionately affect young men.

Angelica Ramos, 29, a mother of three public school students in the Baldwin Hills neighborhood of South Los Angeles, said she would either enroll her children in a charter school or home-school before vaccinating them. While she takes the pandemic seriously and supports masking, she said, she is concerned about side effects and said most of the parents she knew felt similarly.

“It shouldn’t be mandatory,” she said. “It should be our decision.”

Los Angeles is not the first district to mandate vaccines for students 12 and older. Culver City, in west Los Angeles County, approved a mandate in August, and other California districts are considering similar requirements.

Districts, however, need to be able to accommodate families that refuse vaccinations. Los Angeles offers online independent study for those who opt out of in-person learning this year; so far, 3 percent of students have chosen it.

But New York and Chicago, the country’s other two largest school districts, offer only limited online schooling to students with medical issues.

On Thursday, Mayor Bill de Blasio said New York would not follow Los Angeles’s lead on the student vaccine mandate. “We just don’t think that’s the right thing to do,” he said, adding that it could keep families who are not ready to vaccinate out of in-person learning.

The Los Angeles mandate will not kick in until Nov. 21, when students need to have received their first dose. Students will need their second shot by Dec. 19 to begin the next semester fully inoculated. Those who turn 12 after those dates will have 30 days after their birthday to receive their first shot.

Students participating in in-person extracurricular activities need both shots sooner, by the end of October. The resolution mentions “qualified and approved exemptions” but does not offer details.

Initial data on infections at Los Angeles schools this academic year has been reassuring. According to a Los Angeles Times tracker based on district data, 1,385 active Covid-19 cases had been identified at schools as of Tuesday; four were linked to on-campus transmissions, and a single school had a campus outbreak.

Like many districts, Los Angeles Unified has been operating vaccine clinics in schools. It has the nation’s broadest school testing program, screening all students and staff members for infection weekly. Masks are required for every individual on campus, indoors and outdoors, and staff members must be vaccinated, with limited exceptions for serious medical conditions and sincerely held religious beliefs.

The four-month timeline before proof of vaccination is required on Jan. 10 would allow the district to partner with community organizations, clinics and doctors’ offices to reach approximately 80,000 students who are eligible for vaccination but have not been inoculated, Mr. Melvoin said. The district might knock on doors, in an effort similar to the one encouraging families to fill out the U.S. census.

The task will be logistically complicated in a large, sprawling district like Los Angeles. And while not every eligible student will be fully vaccinated by Christmas, the timing of the required first and second shots should allow students to gain at least some protection against the virus before the holiday season, when cases surged last year.

“We did not want to set the district up for failure by setting a deadline that had to be pushed back,” Mr. Melvoin said.

A key constituency supporting a student vaccine mandate is the city’s teachers’ union, United Teachers Los Angeles. The group has pushed for stringent safety measures throughout the pandemic and, during the previous academic year, a longer period of remote learning. The union continues to ask for more aggressive quarantines for those exposed to the virus.

“With so many educators being parents as well, we understand that many questions and concerns exist around the vaccine,” Cecily Myart-Cruz, the union president, said in a statement. “But these questions should not take away from the critical step that will keep our schools safer and help protect the most vulnerable among us, including children too young to be vaccinated.”

Both the union and district said they did not have data on the percentage of staff members who have been vaccinated ahead of the district’s Oct. 15 deadline.