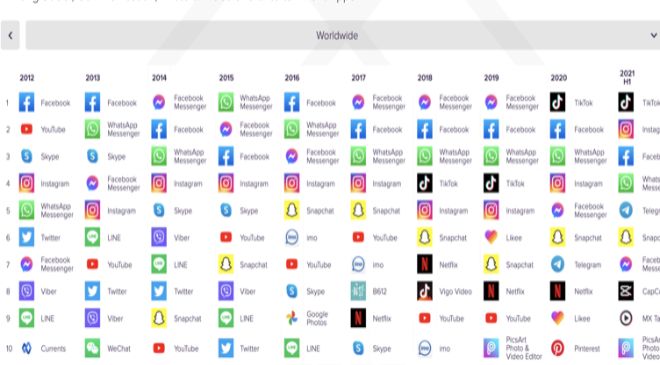 Live streaming and the explosion of the “creator economy” are igniting the current rise in social media app use and rapidly changing the landscape, a new study finds.

This year alone, consumers have already downloaded more than 9.2 billion apps and are expected to spend 740 billion hours on them. That includes an estimated 548 billion hours of them live streaming – in top apps including TikTok, Twitch and Instagram, according to mobile data and analytics tracker App Annie in its “The Evolution of Social Media Report” released Monday.

Other report findings show that this year’s hourly usage on apps will likely surpass last year’s total of nearly 800 billion hours mostly in part to increased use in mobile and other devices due to the ongoing COVID-19 pandemic, App Annie executives told USA TODAY.

App Annie cites the usage surge of Twitch, which is celebrating its 10th anniversary. As Twitch initially rose to popularity with gamers and has more than 30 million people who visit the site daily, more consumers are turning to Twitch to make connections outside of game streams from everything ranging from music to comedy, App Annie found.

Marcus “djWHEAT” Graham, Twitch’s head of community productions who’s been with the platform since its start in 2011, told USA TODAY in June that Twitch has empowered millions of creators “who now truly have a ‘job that they love’ that allows them to share their passions with their communities.”

Many of those passionate Twitch streamers last week participated in a boycott, #ADayOffTwitch, to protest a spate of “hate raids,” on the platform. In response, Twitch said “it’s working hard on improved channel-level ban evasion detection and additional account improvements” to help make the site safer.

App Annie’s report also reflects how some creators are even being encouraged to get paid to produce original content on apps. Facebook CEO Mark Zuckerberg recently said the social network is planning to pay up to $1 billion to those who create content on its platforms through 2022. The company also said it won’t take a cut on creators’ revenue until 2023.

Lexi Sydow, App Annie’s head of insights said the changes are part of an emerging trend. Some of our favorite apps are shifting from primarily texting, chatting and photo sharing to also focusing on gaming, sharing videos and continuous streaming to appeal to consumers, Sydow said.

Consumers are expected to spend an estimated $6.78 billion via social apps worldwide this year, according to the App Annie report. The figure includes American and Japanese consumers spending more than $1.5 billion on app usage during the first six months of 2021.

“It’s a momentous shift and is quickly becoming a really important part of the narrative in social growth,” Sydow said of the consumer social apps spending. She said App Annie projects the apps spending could climb up to $17.2 billion annually by 2025, a 29% increase.

App Annie’s report also comes as tech giant Apple said it’s letting app developers email their users about ways to sidestep the iPhone maker when signing up for subscriptions. Previous moves could have led apps to be removed from Apple’s popular app store, which is a perennial cash cow for the iPhone maker.

The App Annie report said TikTok is the most downloaded social and entertainment app in the world for a second straight year. Instagram, which just asked its 1 billion users worldwide to verify their birthdates, has supplanted its parent company Facebook as the second-most downloaded app globally, the report said.

The theme of users preferring to download and use short-form video content and live streaming apps are prevalent, the report said. As a result, many consumers are opting toward paying for sometimes raw and unedited work by creators instead of professionally produced content.

“Consumers are opening their wallets to the creator economy at a level we’ve never seen before,” the report said.

One app that App Annie says encourages consumer spending is Singapore-based Bigo Live which uses “beans” as a form of “gifting” (giving funds) to content creators during live streams. Other apps with similar practices include Twitch, where users can send “bits,” and TikTok uses “virtual coins” to compensate creators.

“We are committed to helping our broadcasters becoming the celebrities of tomorrow,” Ong said.

Sam Yang, App Annie’s senior vice president said it’s hard to keep up with apps because they constantly change due to the landscape and the increased competition to get consumers.

“What we’re seeing today will likely not be what we see in a year from now,” Yang said.