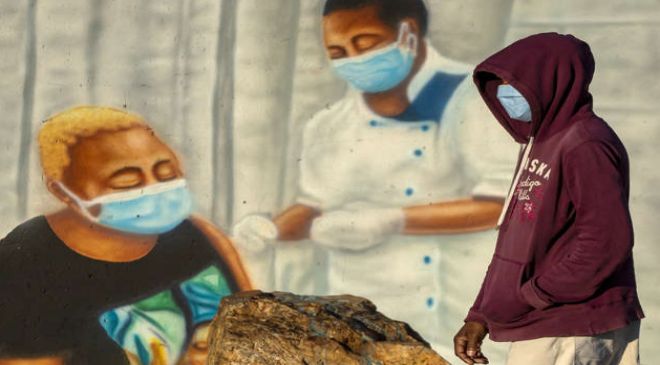 HARARE, Zimbabwe (AP) — The future looked promising for Tinashe Mapuranga, an intern at a leading bank in Zimbabwe who appeared set to get a staff position as soon as he completed his college degree. Then the COVID-19 pandemic hit.

Amid the lockdowns, the 24-year-old was one of the first to be laid off and has no idea when he’ll be able to get his degree because of frequent school closures.

“It has really affected me a lot in my studies. I have no money to buy data and I don’t have a personal laptop to study online and keep up like what others are doing,” said Mapuranga, who lives with his mother in Chitungwiza, a sprawling working-class area southeast of Harare, the capital.

“I was supposed to finish in November or December 2021, but as of now, we haven’t completed much of the work,” he said. “Truly speaking, I am not sure when I will finish the degree. I can’t wait to graduate and find a job and do something tangible in life.”

Mapuranga spends most of his time at home, tending a tiny vegetable garden that is the family’s main source of food. His mother ekes out a living traveling to South Africa to sell things like stone carvings and brooms on the streets, a trade also badly hit by the pandemic.

“We’ve been trying to hustle to get some money,” he said. “I tried to do a small business selling cooking gas but the authorities chased us away from the streets. My father passed away. My mother is into informal business, but it’s also down with these lockdowns. Things are not well right now. It’s tough.”

Mapuranga’s situation might look dire, but he says he’s concerned about some of his unemployed peers who have fallen into alcohol, drugs and prostitution.

“Many youths have lost hope,” he said.

Across Africa, many others like Mapuranga are battling the economic downturn caused by COVID-19, losing jobs and seeing their education disrupted, a survey of people aged 18-24 in 15 countries has found.

The pandemic increased the already-high level of unemployment among the group, according to preliminary findings of the second annual Africa Youth Survey.

Nearly 20% of the 4,500 respondents said they became unemployed because of the pandemic and 37% were forced to stop or pause their education. Another 8% saw their pay docked, 18% had to move back home and 10% said they had to care for family members, according to the survey, which was commissioned by the Johannesburg-based Ichikowitz Family Foundation, whose founder, Ivor Ichikowitz, runs Paramount Group, an aerospace, security and military contractor

Of the 1.3 billion people in Africa’s 54 countries, an estimated 250 million are aged 18-24. The study was conducted in major urban and trading centers in Angola, Congo, the Republic of Congo, Ethiopia, Gabon, Ghana, Kenya, Malawi, Mozambique, Nigeria, Rwanda, South Africa, Sudan, Uganda and Zambia. The researchers for PSB Insights, a global polling company, were nationals of each country where the survey took place and went door-to-door for in-depth, face-to-face interviews.

People surveyed said the pandemic caused substantial disruptions to their schooling, emphasizing the need for more computers and internet access in Africa for online education.

Bola Badejo, 29, saw her salary at the broadcast station where she worked in Abuja, Nigeria, cut in half, and she complained that she could not make it on the equivalent of $146 a month.

“I was already poor and I was working just for the sake of doing the job,” she said. Then, in April 202, she was laid off.

“I fell into depression because the whole thing was really sad. I felt I had nowhere to go,” Badejo said.

After seven months without a job, she started a home cleaning business, and that has boosted her outlook, she said.

Badejo is typical of many who have found different ways to support themselves.

In 2020, about 40% of those surveyed expressed optimism about the future. The pandemic dented that confidence, lowering it to 31%, according to the survey.

Uganda has had two lockdowns since April 2020, the second of which was relaxed in July. But businesses involving close human interaction — bars, gyms and nightclubs — remain closed by presidential order, leaving many young people without work.

Ronald Maathe, a 25-year-old janitor at a gym outside Uganda’s capital of Kampala, shook his head sorrowfully when saying that his monthly salary is now the equivalent of $43. That’s half of what he used to earn before the pandemic

“After I pay the rent, I am left with almost nothing,” he said. “The half salary doesn’t do anything.”

His face lights up when describing how he makes ends meet by selling passion fruit — or grenadillas — that he buys from farmers near the border with Congo. He makes a small profit on every sack of fruit he sells in Kampala.

“My business is still small. But I have a dream,” he said. “If I can get someone to hold my hand, and give me a loan to expand my business, that’s what I want. I am not waiting for the government to help me.”