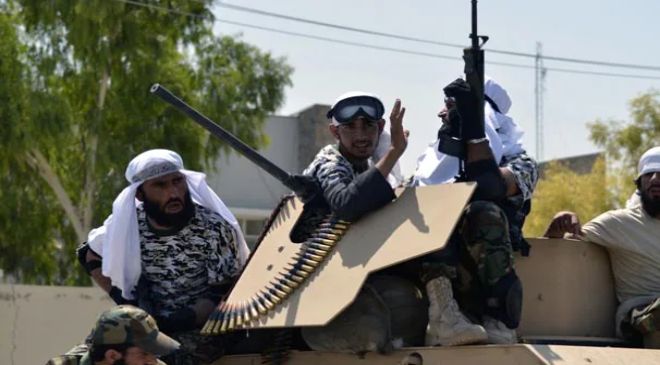 The Qatar Airways flight, the first to land in Kabul since the US withdrew from Afghanistan Monday, brought a team of technical experts to work on the airport, a source close to the matter told AFP.

The Taliban on Wednesday paraded some of the military hardware they captured during their takeover of Afghanistan, as a team from Qatar landed at the trashed airport in Kabul — a first step towards getting the facility back up and running as a lifeline for aid.

The Qatar Airways flight, the first to land in Kabul since the US withdrew from Afghanistan Monday, brought a team of technical experts to work on the airport, a source close to the matter told AFP.

The goal was to resume flights for aid, after the United Nations warned of a looming “humanitarian catastrophe” in war-ravaged Afghanistan, and to provide a way out for those wanting to flee the new regime.

Talks are ongoing on who will now run the airport, just one of the many daunting challenges facing the Taliban as they transition from insurgent group to governing power.

The Islamist hardliners — who have not yet announced their new government — are celebrating the US withdrawal as a historic victory after taking control of Afghanistan a fortnight ago.

Their arrival in Kabul capped an astonishing two-week offensive across the country, ending their 20-year insurgency.

On Wednesday, a long line of green Humvees and armoured fighting vehicles drove in single file along a highway outside Kandahar — the spiritual birthplace of the militant movement — many flying white-and-black Taliban flags.

A helicopter flew overhead trailing the Taliban’s standard as fighters wrapped in headscarves waved beneath.

At least one Black Hawk helicopter has been seen flying over Kandahar in recent days, suggesting someone from the former Afghan army was at the controls as the Taliban lack pilots.

Word had spread that the Taliban’s secretive supreme leader Hibatullah Akhundzada would appear — but he did not show, leaving the city’s new governor to address the crowd.

The scenes of Taliban triumph came hours after US President Joe Biden gave a defiant speech defending the decision to end America’s longest war, and the frenzied evacuation effort that ensued as the Afghan government collapsed.

The president, who has been savaged by critics over the withdrawal, which saw the US and its allies evacuate more than 122,000 people in just over two weeks, hailed the operation as an “extraordinary success”

Many thousands of Afghans who fear Taliban retribution were left behind, however.

“Everybody who lived it is haunted by the choices we had to make and by the people we were not able to help depart,” a senior US State Department official said Wednesday, speaking on condition of anonymity.

Many Afghans are terrified of a repeat of the Taliban’s initial 1996-2001 rule, which was infamous for their treatment of women, as well as a brutal justice system.

The group has repeatedly promised a more tolerant brand of governance this time around.

On Wednesday, they even approved Afghanistan’s first cricket Test match since their takeover, raising hopes that international matches — long a bright spot for the country — will continue under the Islamists’ rule.

Still, senior Taliban leader Sher Mohammad Abbas Stanikzai told BBC Pashto that while women could continue working, there “may not” be a place for them in the cabinet of any future government or any other top post.

The US-led airlift began after the Taliban completed an astonishing rout of government forces and took over Kabul on August 15.

It finished just before the August 31 deadline set by Biden to end the war, which began with a US-led invasion that ousted the Taliban in the wake of the 9/11 attacks.

The conflict killed tens of thousands of Afghans and more than 2,400 American service members.

Top US general Mark Milley suggested Wednesday that the US could now work with the Taliban against the ISIS group.

But he was cautious, telling reporters in Washington: “We don’t know what the future of the Taliban is, but I can tell you from personal experience that this is a ruthless group… And whether or not they change remains to be seen.”